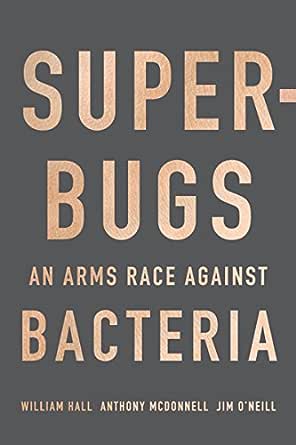 Flip to back Flip to front
Audible Sample Playing... Paused   You are listening to a sample of the Audible narration for this Kindle book.
Learn more
ISBN-13: 978-0674975989
ISBN-10: 0674975987
Why is ISBN important?
ISBN
This bar-code number lets you verify that you're getting exactly the right version or edition of a book. The 13-digit and 10-digit formats both work.

“An immensely readable description of the challenges that encourage overuse of antibiotics and discourage new drug development…Superbugs is a worthy exposition of the challenges we will have to surmount to incentivize more responsible antibiotic use until we discover new ways of dealing with infections.”―Ramanan Laxminarayan, Science

“As antibiotics become increasingly ineffective, modern medicine faces a global threat. Can we do anything to stop it? That’s the question posed by the book Superbugs: An Arms Race against Bacteria. [The] authors look at the rise of drug resistance, and their research is sobering.”―Late Night Live (Australian Broadcasting Corporation)

“Jim O’Neill helped take the issue of antimicrobial resistance from the science lab to the global stage. He and coauthors Anthony McDonnell and William Hall impart a compelling story about the battle against what could become a mass killer of humanity.”―David Cameron, former Prime Minister of the United Kingdom

“Addressing antimicrobial resistance requires the kind of thoughtful yet action-oriented analysis that this vitally important book provides. The messages in Superbugs should be heeded by individuals, government officials, and policymakers around the world.”―Larry Summers, former director of the White House National Economic Council

“With superb insight into one of the greatest health threats to humankind, Superbugs highlights the need for an integrated, multifaceted approach to treating drug-resistant infections. This riveting book makes a compelling case for action.”―Peter Piot, London School of Hygiene and Tropical Medicine --This text refers to the hardcover edition.

Anthony McDonnell is a researcher at the London School of Economics working to understand the economic impact of malaria eradication in India.

Economist Jim O'Neill is the former commercial secretary to the treasury in the United Kingdom.

Matthew Lloyd Davies is a veteran actor, audiobook narrator, and director. Throughout his acting career, he has made regular appearances with the Royal Shakespeare Company, Royal National Theatre, in the West End, on international tours, and in award-winning television shows and films. --This text refers to the audioCD edition.

Amazon Customer
1.0 out of 5 stars Disappointed
Reviewed in the United States on June 5, 2019
Verified Purchase
Not what I expected. Very general. Not for individuals in the medical field
Read more
One person found this helpful
Helpful
Comment Report abuse

.NET Dev
1.0 out of 5 stars For policy wonks
Reviewed in the United States on June 9, 2019
Verified Purchase
Some very interesting history at the beginning about science. The rest is very dry, detailed capitalist plans to avert what is, admittedly, a potential crisis.
Read more
One person found this helpful
Helpful
Comment Report abuse

farouq alessa
5.0 out of 5 stars SCARY ... a must read !!
Reviewed in the United States on September 1, 2018
Verified Purchase
Scary book to read .., about the stuff going on in ur body! Enjoy life now !!!
Read more
One person found this helpful
Helpful
Comment Report abuse

Amazon Customer
5.0 out of 5 stars Breaks down a world wide complex problem that impacts every body's health.
Reviewed in the United States on June 14, 2020
Verified Purchase
People should know how are we destroying our own health by not resolving this problem.
Read more
Helpful
Comment Report abuse
See all reviews

Aisling
5.0 out of 5 stars Excellent book!
Reviewed in the United Kingdom on August 17, 2018
Verified Purchase
Excellent summary of the global health epidemic and how it can be tackled
Read more
One person found this helpful
Report abuse