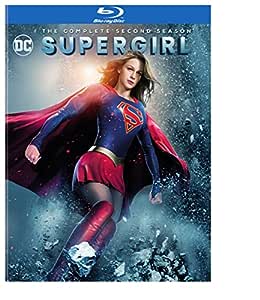 Having left the safety of being Cat Grant’s assistant at Catco Worldwide Media in order to figure out what she really wants to do, Kara Danvers (Melissa Benoist) continues to work with Hank Henshaw (aka Martian Manhunter) and her adoptive sister Alex (Chyler Leigh) at the DEO as Supergirl – protecting the citizens of National City and searching for her missing father Jeremiah (Dean Cain) and the secret research lab Project Cadmus. Along the way, she will team up with her Kyrptonian cousin Kal El – aka Superman (Tyler Hoechlin) – to battle new villains both terrestrial and extraterrestrial, from the DC Universe, as she strives to balance her personal life with friends/allies James Olsen (Mehcad Brooks), Winn Schott (Jeremy Jordan) and more with her busy life as a new Super Hero in SUPERGIRL Season Two. (TBC)

4.5 out of 5 stars
4.5 out of 5
1,062 global ratings
How are ratings calculated?
To calculate the overall star rating and percentage breakdown by star, we don’t use a simple average. Instead, our system considers things like how recent a review is and if the reviewer bought the item on Amazon. It also analyzes reviews to verify trustworthiness.

Cigar Jackal
2.0 out of 5 stars This show went downhill fast
Reviewed in the United States on August 20, 2018
Verified Purchase
I really enjoyed the first season of Supergirl. The main character was interesting, and her sister was a strong independent woman.

Jump to season 2. The show became a thinly veiled anti-Donald Trump propaganda piece (including a "Resist" speech that could easily have been used at an ANTIFA rally). Add in a huge helping of identity politics, and a once fun show about a superhero has been reduced to political drivel. It is a shame.
Read more
18 people found this helpful
Helpful
Comment Report abuse

Diego Rubio
2.0 out of 5 stars Drifted from original concept - lesbian relationship in a superhero serie?
Reviewed in the United States on February 27, 2019
Verified Purchase
I am not homofobic, but somebody please tell me what is the real concept behind the lesbian relation in a superhero serie? In the first season Alex was strong and very capable, here in this season she is a lesbian woman with new lesbian relationship problems, no more fights or strong character here. I can go on with the idea, it is "normal", but also it is necessary to show two women kissing? Don't misunderstand, I can watch that in multiple movies or shows, in the streets or even in porn, but in a Supergirl serie?????? From my point of view is completely out of place and I don't like it, this is for entertaining and also for kids, isn't it?
Read more
12 people found this helpful
Helpful
Comment Report abuse

Bill Copeland
5.0 out of 5 stars Supergirl is an amazing series
Reviewed in the United States on May 17, 2017
Verified Purchase
Melisa Benoist is perfect for this role. She is never actory in this superhero role. She comes across like a real person, even in moments of battle as she reflects the feelings of an actual human being. Her winsome screen presence and likable character will carry her far. Martian Manhunter, Guardian, Superman, and Flash are nice additions now and then. Clasissta Flockhart has been missing in action until near the end of this season but returns with a strong presence and her character has a strong message and purpose. The action is well paced. The special effects are fantastic. The acting is good, especially the interplay between Supergirl and Cat. This show just keeps getting better and better, and if Hollywood ever puts Melissa Benoist in one of their Justice League movies or in one of their Superman movies, she will become a huge star. She's a natural.
Read more
8 people found this helpful
Helpful
Comment Report abuse

J. Reding
5.0 out of 5 stars Greg Berlanti has done it again with another DC Universe ...
Reviewed in the United States on April 8, 2018
Verified Purchase
Greg Berlanti has done it again with another DC Universe character, this time latching onto the delectable Melissa Benoist to play the 'Girl of Steel,' sent to Earth to protect her cousin Kal-El (Superman) until her shuttle got knocked off course, causing her to arrive on Earth well after Clark has grown up and established himself as Superman. Kudos to Berlanti and his team for not playing heavily on that relationship and only bringing in the more famous superhero on occasion. The only thing that bugs me about this is that THIS Earth is in a parallel dimension to the Earth WE live on, where the other DC characters also live - The Flash, Batman, Wonder Woman, et al. The reason it bugs me is because for all these years that we've known these characters they have teamed up as the Justice League, but they couldn't do that if they lived on parallel worlds.
Read more
5 people found this helpful
Helpful
Comment Report abuse

This season was part continuation and part reboot for the show. As most are aware, after the first season aired on CBS, the series was moved over the the CW (joining the other DC shows, Arrow, Flash, and Legends of Tomorrow). While this presented other opportunities for the show, including the 4 show crossover that happened about 1/3 of the way into the season, one practical result was the filming moved from Los Angeles to Vancouver, which meant it lost some of the actors from season 1 so some of the storylines just got dropped (such as the entire story involving Max). Also, Calista Flockhart returned only as a recurring character as opposed to series regular, so there was much less of Cat's character during the season.

It picks up right after the events of season 1, where the ship crash lands. One of the new characters on the show is introduced (Mon-El) who is from a planet called Daxum which was a neighbor of Krypton. The season also introduces the character of Lena Luthor, who is trying to rehabilitate the Luthor name since Lex has been imprisoned by Superman (who also joins the show, played by Tyler Hoechlin), While I would have loved to see Tom Welling reprise the role since he played Clark on Smallville for years, Tyler does a great job with the role, especially as Clark Kent.

The theme of the show this season is really Humans vs Aliens, playing off of many of the real-world themes/events that have sprung up over the course of the 2016 election and its aftermath. There are many nods and jabs to our politicians, some subtle and some not so much that occurred during the season, especially toward the end. There are really two main villains this season. One is the anti-alien organization called Cadmus, and the other I cannot give away because it would spoil too much. There are also appearances by Teri Hatcher and Dean Cain, who of course played Superman and Lois during the 1990s series Lois & Clark. Each has fairly substantial parts during the season, although the never appear with each other.

For those who get the discs, the series looks great on blu-ray as you would expect. There are a handful of behind the scenes features including a portion of the comic-con panel, some behind the scenes material for specific episodes, a commentary track with Kevin Smith and the show's creator on the episode he directed, Supergirl Lives. There are no deleted or extended scenes, nor are the other shows from the crossover event included. What is there is good, all in all about 45 min or so of material, but they could have included a lot more extras. If you are a fan of the shows like Flash and Arrow then chances are you will like this, even though it has its own feel. The show definitely changed some because of the network switch, but I think if kept most of its core. It worth checking out, either via streaming or adding to your blu-ray/DVD collection. I would say if you only get the discs when they include a lot of bonus material then you probably would just want to stream it.
Read more
11 people found this helpful
Helpful
Comment Report abuse
See all reviews