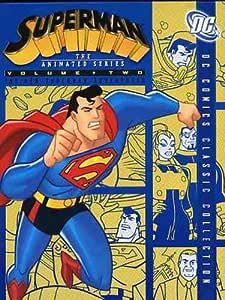 The creative team behind the Emmy® Award-winning Batman: The Animated Series chronicles the adventures of Superman, the World’s Greatest Super Hero. Fly with Superman in this all-new collection of adventures. As the Planet Krypton is destroyed, its leader, Jor-El, secures his infant son, Kal-El, in a rocket that will transport him to Earth. There, as Clark Kent (voiced by series star TIM DALY), he discovers the truth about his interplanetary heritage and, upon reaching adulthood, assumes the identity of Superman, the Man of Steel. In the city of Metropolis, he battles the forces of villainy and continues his quest for "Truth, Justice, and the American Way." In season two, Krypton's most notorious traitor, Jax-Ur (recurring guest voice RON PERLMAN), escapes; Brainiac (recurring guest voice COREY BURTON) returns for revenge; and Bizarro (also voiced by series star TIM DALY), a genetic double of the Man of Steel, tries to take Superman's place as Metropolis' hero, among many other adventures.

Superman: The Animated Series, Volume Two, the second of the series' three season run, continues the modern telling of the American myth Superman. Where the first season focuses on introducing Superman, Metropolis, and a few key bad guys, season two is all about the villains. A few key villains return, including Lobo, series favorite Metallo (voiced by Malcolm McDowell), and of course the evil genius Lex Luthor. But what defines season two is the introduction of new villains such as Superman's evil twin Bizarro (in "Identity Crisis" and "Bizarro's World"), Livewire (voiced by Tank Girl herself Lori Petty), and Luminus (voiced by Airplane!'s Robert Hays). Also new to the series is Mr. Mxyzptlk in one of the best episodes of the series, "Mxyzpixilated," starring the great Gilbert Gottfried as the quirky, interdimensional leprechaun. One of the series' highlights is the three-part episode "World's Finest." This trilogy is a great cross-over story with guest appearances from the other popular DC animated series Batman. Here the man of steel joins forces with the caped crusader to fight Gotham's arch villains the Joker (played by Mark Hamill) and Harley Quinn, who have recently teamed up with Metropolis's Lex Luthor in a plot to kill Superman. Superman: The Animated Series, Season Two is a sharp telling of the Superman story and not to be missed. --Rob Bracco

4.8 out of 5 stars
4.8 out of 5
830 global ratings
How are ratings calculated?
To calculate the overall star rating and percentage breakdown by star, we don’t use a simple average. Instead, our system considers things like how recent a review is and if the reviewer bought the item on Amazon. It also analyzes reviews to verify trustworthiness.

Eric Arismendi
5.0 out of 5 stars When Mxyzpixilation meets Supercalifragilisticexpialidocious!
Reviewed in the United States on June 16, 2006
Verified Purchase
Completely, absolutely, magnificently wonderful! If you liked "Superman, the Animated Series: Volume 1," then you'll adore and love "Superman, the Animated Series: Volume 2" because the best episodes of the 1997 animated series are here! Viewers first get introduced to one of Superman's most trickiest enemies - Mr. Mxyzptlk!!!!! A powerful being from the 5th dimmension, Mr. Mxyzptlk, is very hard for Superman to beat in the episode. Other great super-villains make their first appearance here too. Such characters include: Luminus, Karkull, Bizarro, and Darkseid (Darkseid made a small cameo in Volume 1, but this is his true first episode). In three of these great episodes, Barman and Superman must team-up in order to defeat Lex Luther and The Joker who are working together to destroy The Man of Steel! Also.....Superman meets his clone, Metallo returns with amnesia, someone is trying to secretly kill Lois Lane (but who?), Braniac downloads himself into Lex Luthor's computer, Parasite and Livewire team-up, Clark Kent is thought to be dead, Lois Lane gets stuck in an alternate version of Metropolis, and Superman must battle a really big monkey!

Here are the following episodes found in this 2-disc box-set and the grades I give them:

This volume is very exciting and action-packed. With very, very, very good plots and story lines - this is even better than the comics! While, this is a children's show, I can asure you that it will NOT be ONLY accepted and loved by children. This is true entertainment and adults enjoy it, too. You don't find good shows like these anymore, so I recommend you to start the Timm/Dini animated DC universe collection on DVD box-sets! Even if you're not a Superman fan, if you liked 1992's "Batman: The Animated Series," (and even if you didn't) you'll definetely love this. "Superman: The Animated Series" rocks!!! Buy this for a new generation of children, because it's worth it!

Virtualmonk
3.0 out of 5 stars Great content. Lousy DVD/Package design and quality control of DVDs
Reviewed in the United States on December 9, 2008
Verified Purchase
The episodes in this volume are top-notch. Unfortunately, Warner Brothers Video went the cheap route (again) and Disc 2 and Disc 3 are on opposite sides of the same disc. This may or may not have been the reason, but after the first play of Disc 3, it would no longer play (or even be recognized) on any of my DVD drives (a Panasonic DVD-R, a Panasonic DVD Player, a Toshiba DVD-R PC drive, a Panasonic DVD-R PC drive and an external Panasonic DVD-RAM PC drive (which normally plays DVDs just fine)). There's no visible damage to the DVD surface. It just won't play.

I wrote WB Customer Service and eventually got a response saying my e-mail had been forwarded to corporate, but I have not heard anything after that.

I'm well past my return window for returning to Amazon without paying postage plus a 15% restocking fee, so unless Warner Brothers corporate eventually gets back to me, I guess I'll just have to shell out the bucks to get a replacement set.

Update: Warner Brothers Video sent me a pre-paid postage label, so I sent it back, and they quickly turned around and sent me a new set that worked just fine. I'm very impressed with their customer service.
Read more
7 people found this helpful
Helpful
Report abuse

Henry-Clyde
5.0 out of 5 stars Superman returns to DVD!
Reviewed in the United States on June 30, 2008
Verified Purchase
I applaud this release of "SUPERMAN: THE ANIMATED SERIES - VOLUME TWO". The first volume was amazing, but this one exceeds that and more. In this second set of episodes, we learn much more about Superman, along with his various friends and enemies. Most entertaining and interesting is the introduction of Mr. Mxyzptlk in "MXYZPIXILATED" and the Joker (usually a Batman villain) to the series in "WORLD'S FINEST". This series still, even though it has long since been cancelled off the air (except for syndication), proves to be a great homage to the Superman universe, and to comic books in general. It is an excellent example of outstanding ideas, insight, animation, action, a bit of romance, and suspense. Below is a list of episodes contained in this two-disc set.

THIS REVIEW IS DEDICATED TO ANYONE, LIVING OR DEAD, INVOLVED IN THE PAST, PRESENT, OR FUTURE "SUPERMAN" UNIVERSE.
Read more
Helpful
Report abuse
See all reviews

PrincessLunaSelena1618
5.0 out of 5 stars A Great Series
Reviewed in Canada on April 11, 2020
Verified Purchase
I love this show
Read more
Report abuse