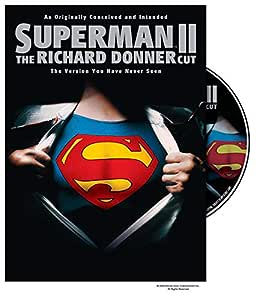 It's the version you've never seen. Finally released as visionary director Richard Donner originally conceived and intended, Superman II: The Richard Donner Director's Cut is a reedited rendering of the legendary superhero film that closely follows the original script and restores the lost footage originally shot by Donner in 1977 before he was taken off the project. Among the fascinating new elements in the director's cut are the original opening and ending, alternate takes and camera angles and deleted scenes featuring Marlon Brando. In the blockbuster sequel, Christopher Reeve, Gene Hackman, and Margot Kidder return as Superman confronts three supercriminals with abilities equal to his. The Kryptonian threesome arrives just as Superman is preparing to exchange his powers for a romantic relationship with Lois Lane.

The Richard Donner cut of Superman II is an infamous legend come to life. Director Donner shot most of the sequel at the same time as his first blockbuster film, but somewhere along the line, the producers and studio lost confidence and brought in Richard Lester (The Three Musketeers) to rework the film, and receive sole credit. For years fans speculated on how different the final film was from Donner's original until an underground copy appeared showing a fully formed feature. In an unprecedented move, Warner Brothers officially embraces this alternate version. For those who have not been part of the rumor mill, know that Donner shot all the footage with Lex Luthor (Gene Hackman). You can find blow-by-blow descriptions of what is new/changed elsewhere, but most of the changes deal with Christopher Reeve and Margot Kidder as the comic-book couple. Donner's cut provides alternate scenes for how Lois tests her hunch that Clark is Superman, the moment he reveals his identity, and how Lois unlearns that truth. Thing is, Lester's reshots are stronger, adding weight to the romance between the two, lifting the picture's stature. Lester also added the dandy Eiffel Tower opening. Donner's chief additions are in the Fortress of Solitude, where Marlon Brando returns to teach (Susannah York, as Superman's mom, appears in the Lester cut). The producers cut Brando's footage so they wouldn't have to pay him millions. The Brando/Reeve scenes continue the father/son dynamic of the first film. There is a great lesson in editing--Lester's less is better than Donner's more--when you compare how Kent turns back into Superman after losing his powers. The Donner cut is completely formed but does use some rehearsal footage, new effects, and some pieces shot by Lester. The history of cinema has many of these stories of movies reshot, hijacked, and changed from the original version, but here the underdog wins and Donner gets his chance to change history, even adding a note in the end credits about the use of fur and smoking as regrettable choices of the time.

Director Donner and creative consultant Tom Mankiewicz have a jolly good time revisiting their past on the commentary track. You get a clearer picture of who shot what, but the two have nothing good to say about Lester's edition. Donner doesn't go much into why he was dropped, just a difference of opinion and the need not to pay Brando. He also explains why the déjà vu ending of this edition was used in the first movie and a new ending would have been thought up for part 2. A quick featurette looks at how Michael Thau and a small crew reconstructed the film and compares several scenes from both versions. Also added are additional scenes shot by Donner but not used, most with Hackman. --Doug Thomas