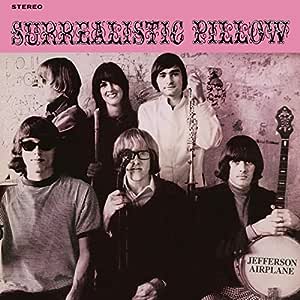 Jefferson Airplane Format: Audio CD
4.7 out of 5 stars 981 ratings
Amazon's Choice recommends highly rated and well-priced products.
Amazon's Choice for "jefferson airplane"
See all 45 formats and editions Hide other formats and editions
Includes FREE MP3 version of this album.&nbspProvided by Amazon Digital Services LLC. Terms and Conditions. Does not apply to gift orders.&nbspComplete your purchase to save the MP3 version to your music library.
Available at a lower price from other sellers that may not offer free Prime shipping.

Their 1967 breakthrough, along with Sgt. Pepper's THE soundtrack to the Summer of Love. Bonus tracks include mono single versions of Somebody to Love and White Rabbit; In the Morning; J.P.P. Mc Step B. Blues; Go to Her , and Come Back Baby .

4.7 out of 5 stars
4.7 out of 5
981 global ratings
How are ratings calculated?
To calculate the overall star rating and percentage breakdown by star, we don’t use a simple average. Instead, our system considers things like how recent a review is and if the reviewer bought the item on Amazon. It also analyzes reviews to verify trustworthiness.

Steven HaaralaTop Contributor: David Bowie
5.0 out of 5 stars Coming into focus...
Reviewed in the United States on November 20, 2018
Verified Purchase
It's funny how things can seem different to you 51 years later. (Wait. 51 years? That can't be right. There must be some mistake. No? OK....) In 1967 all that mattered to me about Jefferson Airplane was Grace Slick belting out the 2 iconic hits, "Somebody To Love" and "White Rabbit", and this new band backing them up with hard rock and furnishing more rock extras as well, like "She Has Funny Cars", "3/5 of a Mile in 10 Seconds" and "Plastic Fantastic Lover". I don't think I appreciated all of the tracks as much as I should have, nor did I take note of the fact that here was a group of musicians with diverse talents that were making diverse musical delights. Now I see how good some of the other tracks really are: the yearning of "Today", the melodious folk-rock of "D.C.B.A.-25", and the mid-tempo pop excellence of "How Do You Feel". I can also spot sounds that remind me of bands like the Beatles and the Byrds. And I can put this album into perspective. I would not have called it commercial or mainstream in 1967, but now I can see that it was a launching pad from which JA took off wildly into many directions. This in no way diminishes the importance of "Surrealistic Pillow". It was one of the key factors which brought about the Summer of Love, and it articulated many ideas that became 60's gospel, besides "FEED YOUR HEAD!" from "White Rabbit". There is early counterculture optimism in "She Has Funny Cars": "We live but once/But good things can be found around/In spite of all the sorrow/If you see black/You can't look back/You can't look front/You cannot face tomorrow." "3/5 of a Mile in 10 Seconds" delivers what I feel is an endorsement of communal living: "Take me to a circus tent/Where I can easily pay my rent/And all the other freaks can share my cares." And Marty Balin takes a shot at the Establishment in "Plastic Fantastic Lover", where he describes one of society's worst evils - television: "Data control and IBM/Science is mankind's brother/But all I see is drainin' me/On my plastic fantastic lover."

More JA gems are provided in the bonus tracks. "In The Morning" is a fantastic offering of vintage old-school blues. The oddly titled "J.P.P. McStep B. Blues" is not blues at all, but nice, upbeat folk-rock. And trademark JA rock can be found in "Go To Her" and "Come Back Baby". After the final listed track (the mono single version of "White Rabbit") there is a hidden track, an instrumental version of "D.C.B.A.-25".

Jason Smith
5.0 out of 5 stars Get the Sundazed Mono.
Reviewed in the United States on July 1, 2016
Verified Purchase
I have an older stereo version of the lp and the new Sundazed mono edition and strongly recommend everyone try the mono. The album just feels like it was meant to be in mono. Sundazed did a great job with it. The instruments sound amazing, especially the acoustic guitar on Embryonic Journey.
Read more
21 people found this helpful
Helpful
Comment Report abuse

P Willco
5.0 out of 5 stars Far out, check it out, you can't lose. Great pressing.
Reviewed in the United States on September 17, 2018
Verified Purchase
Great album. The two big hits are the best songs, but the rest of the album is worth hearing, too. Wish I'd bought it sooner. I have a lot of other music from the 1960's psychedelic period.

And I gotta say the mp3 version sounds fantastic. I can hear everything. Not sure which mp3 pressing plant they used for this record, but it sounds phenomenal. I didn't have to use anti-static cleaner or anything. The album was also delivered immediately to multiple locations flawlessly. Not a scratch on it and not warped. Played right away on my mp3 record players.

PaulM
TOP 500 REVIEWER
5.0 out of 5 stars Go Ask Alice When She's Ten Feet Tall
Reviewed in the United States on July 27, 2015
Verified Purchase
This album will help you to remember* the sixties whether you were there or not. This is great Jefferson Airplane, well worth the price of admission.

The play list includes my favorite, White Rabbit, in two versions. What more do you have to say.

*The saying goes, "If you can remember the sixties, then you weren't there." This is a self-referential quote. No one remembers who said it first. According to Wikiquote, it is "Attributed to Grace Slick in Bangkok Babylon (2006) by Jerry Hopkins, p. 217, and elsewhere, this was also attributed to Paul Kantner in The New Yorker, Vol. 67 (1991), Dennis Hopper in Roger Ebert's Movie Home Companion (1992), and in various books to numerous others, including Judy Collins, George Harrison, and comedian Robin Williams."

rash67
5.0 out of 5 stars THE one album to sum up the sixties!
Reviewed in the United States on April 12, 2011
Verified Purchase
Plastic Fantastic Lover

Her neon mouth with the bligitaw * smile
Is nothing but a 'lectric sign
You could say she has an individual style
She's a part of the carnival time.

Your rattlin' cough never shuts off
Is nothin' but a used machine
Your aluminum finish, slightly diminished,
Is the best I ever have seen

Data control and IBM
Science is mankind's brother
But all I see is drainin' me
On my plastic fantastic lover
Notes:

these are the real lyrics!
1 Bligitaw - hit in the mouth with a sledge hammer
2- Super-seal-a-ted - a Marty Balin made up word past tense of super sealed
3 Cosmeta-gated - another made up word - combination of cosmetic and gated - gated as a plug and also logic circuit, and-gates, or-gates used in computers of the time

Plastic Fantastic Lover is just what it sounds like - it's science fiction from 1967, about a future with a female robot and exclusive love slave who the author keep hidden in his room. The stuff about TV is just Balin complaining about the general level of junk on TV. His interest in his robot keeps him "drained" of certain fluids. His concept of a plastic fantastic lover replacing a real girl could really be applied today to certain internet sites...

Surrealistic Pillow is the one album, other than Beatles Sgt. Pepper, that really represents the Summer of Love or for that matter the sixties. Just wonderful from beginning to end. One of the top ten Best Rock albums of the sixties... of all time! Listen to this for the authentic psychedelic experience!

Everyone has heard this but if you don't have this latest mix, you've never really heard it. The newest version of this CD is just SPECTACULAR. 40+ years ago it was recorded and 20 years after the invention of the CD RCA/BMI finally did a good job of remixing. (I had 3 previous releases and the LP and this one is it) Yes. better than my '67 vintage vinyl - very 3 dimensional on a good sound system capable of resolving small details!

Includes song "Go to Her", a cut so good, I wonder why it wasn't on the original?

"Jefferson Airplane": story was that early blues folk singer Blind Lemon Jefferson (1893-1929) had a musicologist who followed him around. This guy knew the origin of all Blind Lemon's songs. When he didn't know who wrote the song, he would say "well that's one of Jefferson's Airplanes"! This was the recondite source of the band's name.
JA was originally a folk-rock group with deep folk-singing/blues roots...
Read more
11 people found this helpful
Helpful
Comment Report abuse
See all reviews

LeBrit
5.0 out of 5 stars BLAST FROM The proverbial PAST
Reviewed in the United Kingdom on July 16, 2019
Verified Purchase
Not sure how truly surrealistic it is as this word is generally misused. But certainly evokes rabbits, Alice and Lewis Carroll. And the woman has a truly formidable voice. So Excellent really
Read more
2 people found this helpful
Report abuse

KAT
5.0 out of 5 stars Reason for going back to vinyl
Reviewed in the United Kingdom on April 8, 2017
Verified Purchase
Great album and pleased it was rereleased on vinyl. The sun is shining outside and perfect 'record' to have on the turntable. Sound quality excellent.
Read more
6 people found this helpful
Report abuse

Doot Dee Doo
4.0 out of 5 stars 60s, really good.
Reviewed in the United Kingdom on November 4, 2017
Verified Purchase
I'm a Brit and I would have liked an edition of the UK release, a mix of Surrealistic Pillow and Jefferson Airplane takes off. It's not a big deal, this has some beautiful tracks on it and it's nice to have the slightly-less produced mono mix.
Read more
2 people found this helpful
Report abuse

Malboo
5.0 out of 5 stars The second album by this great band...
Reviewed in the United Kingdom on November 1, 2020
Verified Purchase
A real classic this is! Here is second album by the Jefferson Airplane. Great band the San Francisco summer in the 60's. There are some bonus tracks included too, nice! Recommended!
Read more
Report abuse

Steveh
5.0 out of 5 stars Surreal enough for Dali
Reviewed in the United Kingdom on January 7, 2018
Verified Purchase
Superb early Airplane Album. Marty Balin's "coming back to you " is exquisite.
Read more
3 people found this helpful
Report abuse
See all reviews

Page 1 of 1 Start overPage 1 of 1
This shopping feature will continue to load items when the Enter key is pressed. In order to navigate out of this carousel please use your heading shortcut key to navigate to the next or previous heading.
Back
Next
Pages with related products. See and discover other items: jefferson airplane songs, Explore pillows for airplanes, Explore airplanes for babies