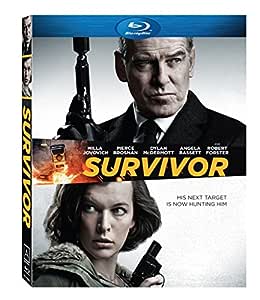 A Foreign Service Officer (Milla Jovovich) newly postedto the American embassy in London is charged with stopping terrorists from getting into the US. After surviving a vicious attack on the embassy, she finds herself framed for crimes she didn't commit and racing to elude assassins while trying to clear her name and stop a large-scale terrorist attack set for New Year's Eve. SURVIVOR is directed by James McTeigueand also stars Pierce Brosnan, Dylan McDermott, Angela Bassett and Robert Forster.

4.0 out of 5 stars
4 out of 5
1,031 global ratings
How are ratings calculated?
To calculate the overall star rating and percentage breakdown by star, we don’t use a simple average. Instead, our system considers things like how recent a review is and if the reviewer bought the item on Amazon. It also analyzes reviews to verify trustworthiness.
Top reviews

Urenna
VINE VOICE
5.0 out of 5 stars Enjoyed This Exciting Suspense-filled Thriller
Reviewed in the United States on September 2, 2018
Verified Purchase
This is a Great British-American, suspense-filled, spy thriller. Pierce Brosman credibly portrayed his role as the ruthless ‘Watchman’ with aplomb. Milla Jovovich, as usual, saved the night for New Year's Eve revelers and, Angela Bassett, dished out a cold plate of brass and ire as the American Ambassador. Dylan McDermott was the nice guy that had Jovovich’s back when the Ambassador became indifferent at a most critical time. The entire cast performed an amazing job. Great movie!
Read more
8 people found this helpful
Helpful
Report abuse

Lodestar
4.0 out of 5 stars The Writers Almost Made this Terrible
Reviewed in the United States on November 22, 2018
Verified Purchase
The acting (Milla and Dylan), production and cinematography in this is rather good. I actually enjoyed the movie quite a bit but...

The terrorists were composed of: A guy whose wife was stuck in London and couldn't get to the U.S. so she died because what? national health services in London wouldn't cut it? Also a day trader looking to short the markets. Also the head honcho has principles which he articulates as "This isn't about terror or a political statement, this is about money." So of course he just ups his fee. We are left to wonder why he supports terror as a blanket motive? Is he satan? Does he support a specific "political statement" that would have made his participation okay, or just in general he supports political statements made through violence? That shows some really juvenile writing!!! As do the timestamps for the scenes that show a basic lack of understanding time zones!

Then the U.S. ambassador, that has more clout than any actual ambassador, rather than flagging the specific terrorist fingered by Jovovich (which would take no effort) instead chooses to focus on her protege? So she doesn't even support her own judgement. Again another silly writing flaw. Also once they knew Milla was being tracked they destroyed the tracker but didn't bother to think its last location was right where they were camped out and that might be a problem? Also the many missed opportunities to relay the simple message of who was going where, to do what which they had figured out pretty quickly (or should have). As if only one person could be trusted knowing the plot. I guess that's why Milla had to do it herself?

Milla did awesome as did Dylan. Pierce Brosnan played what he has seen in other movies and was overly melodramatic as did/was the Ambassador.

So watch it to enjoy a silly story well shot and acted but not for high brow fare...
Read more
3 people found this helpful
Helpful
Report abuse

the_IRF
5.0 out of 5 stars 4+ STARS are DESERVED
Reviewed in the United States on September 11, 2018
Verified Purchase
Film deserves at least 4 Stars [not 3.5 it now has]. {i would like to see it get 4.5+} Plot moves along. Action is good. Actors are Very Competent. All the main Actors were cast to played against their type. They did well, and that "against type" set up was very interesting in itself alone. The energy of the film seemed to show they were all enjoying their chance to play "against type". [Pierce Brosnan, Milla Jovovich, Robert Forster, Dylan McDermott, Frances de la Tour, Roger Rees, Angela Bassett: Were all fun to watch playing against type]
Read more
5 people found this helpful
Helpful
Report abuse

Carlos S.
4.0 out of 5 stars "Good Actions Flick, A Little Jumpy Sharky"
Reviewed in the United States on October 3, 2018
Verified Purchase
This was a good story, fast moving, packed a punch and good plot. The principle 4-5 were all terrific, 007 loves to play an occasional bad guy and lovely Milla could stare down any terrorist with those deep blues eyes, LOL. This film starts with a HVT getting shot down in Afghanistan, captured and held for leverage, while his black buddy was torched with gasoline. Later we find out why they held him, to extort his U.S. Embassy dad for granting access to America to terrorists they cherry pick. Now about those sharks. We're supposed to believe some gutter rat terrorist in Kandahar has access to our military personnel records and knows which of our soldiers has no extortion value, versus which are connected and useful for extortion. We're also supposed to believe our post 9-11 State Dept. would be so careless as to grant so much power to a mid level desk jockey to the point he can over ride all his coworkers and evade red flags. We're also supposed to believe the British intel agents, who can't stop anything in Muslim infested London, are able to keep incredible tabs on us but not terrorists. The film also unwittingly tells more truth than Hollywood liberals usually do when it involves their own. All of this happens under Obama, who gutted our military and security & counter terrorism capacities. Basset plays the clueless US Ambassador, a typical Obama affirmative action appointment, who distrusts our most experienced, no fail assets and nearly allows an act of terror that would've made 9-11 look like a picnic. But my most ironic truth telling is the disgruntled Romanian scientist who's trying to get into the USA for revenge over his wife's death from cancer. The British lackey tells us the wife died waiting for treatment "because some bureaucrat wanted another piece of paper", as if it's the USA's responsibility to let in anyone who's ailing worldwide. What ever happened to European socialized, govt. run healthcare? Wasn't there any EU nation that could have treated her in time?? So this bitter troll's vendetta involves filling the New Year's Eve ball with deadly gas and 007 blowing it up as it begins its descent. I'll leave you to figure out what happens.
Read more
2 people found this helpful
Helpful
Report abuse

C. Arredondo
3.0 out of 5 stars Could've been good maybe... but just wasn't...
Reviewed in the United States on October 7, 2018
Verified Purchase
NO-SPOILER REVIEW

This movie was "meh". It had a few A-list actors and good production values for the most part. But something I can't quite pin was just missing that made it feel rather mediocre and kinda just not that good. The plot while seemingly valid just had elements that made you question the integrity of the whole movie (like one of the protaganist being doubted be their own team etc). That was hard to swallow and just made the movie harder to appreciate. I'm not one to usually care about "believability" THAT much in movies, as movies are fiction and my purpose is a little brief escape ride from reality. But there were elements to it that just made the whole movie seem silly and ridiculous in a sense.

I wasn't not entertained. But I was just frustrated as I watched. Again, some good actors, good production values, but something wasn't quite right that made this movie seem like it just tried hard but didn't really deliver.
Read more
2 people found this helpful
Helpful
Report abuse
See all reviews

P. WILLIAMS
4.0 out of 5 stars Fast,Furious and Above average!
Reviewed in the United Kingdom on August 5, 2016
Verified Purchase
A very good terrorist thriller about a bomb-maker / assassin known as 'The Watchmaker' who is extremely good at his job, is ruthless and in demand. Pierce Brosnan stars and is cast against type. The last time I remember seeing him in such a role was in 'The Fourth Protocol' but he is SO adaptable. Milla Jovovich is attached to the US Embassy in London and is a high-flyer whose instincts for seeking-out the bad guys is second-to-none. Co-Stars: Angela Bassett, who NEVER appears to age, Dylan McDermott - always watchable and Robert Forster. It's a well written screenplay(Philip Shelby) and is directed by James McTeigue. The only real problem I had was trying to make up my mind if Frances De La Tour was an English woman working in the US Embassy or an American woman? Her accent seemed to me at least to sound both? Edge of your seat, fast -non-stop-action.Recommended.
Read more
13 people found this helpful
Report abuse

Martin
2.0 out of 5 stars Easy to understand action story of bad terrorist and brave Americans
Reviewed in the United Kingdom on June 22, 2020
Verified Purchase
Fairly good story for an action story about terrorists that want to hurt 1 million Americans - and no it's not a virus. Why are they against the USA? Because one wants to make money, the second one too and the third one is angry because the visa process is too slow - no joke.
But as justification we're informed after the move that homeland security has prevented 53 attacks after 9/11 - that raised the rating by one star...
The second star and that's no joke is for the trust of the boss in his employee. I like that, in a time where when there is a problem the first reaction of management is to find a scapegoat.
Read more
Report abuse

Amazon Customer
4.0 out of 5 stars Nonstop action in very entertaining movie
Reviewed in the United Kingdom on February 19, 2018
Verified Purchase
In many ways a conventional spy thriller, but has a lot of style. Milla Jovovich seems to specialise in these female action roles, probably because she is so good at them . Great to see Pierce Brosnan as a villain, moving well away from his James Bond image. (Although in my opinion he was the best of the lot!) If you want a good well-written action film, this worth a look.
Read more
2 people found this helpful
Report abuse

Nins
5.0 out of 5 stars Better than expected
Reviewed in the United Kingdom on July 18, 2020
Verified Purchase
I had never heard of this film, and only due to Pearce Brosnan did I venture to buy it. I was surprised it was very entertaining and not at all predictable.
Read more
Report abuse
See all reviews