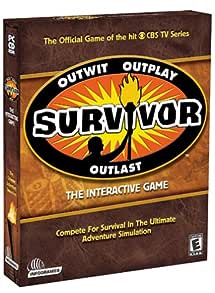 For the first time ever, the hit TV series Survivor has come to your PC. Play as any of the actual 32 Pulau Tiga and Australian Outback cast members or create your own character. Now you can put your skills to the test and see if you have what it takes to become the ultimate survivor.

Determine your role in the tribe by choosing from 10 essential survivor skills, such as field craft, fishing, and cooking. Form alliances and develop relationships with fellow tribe members, or choose to vote off competitors at the tribal council.

Learn the ins and outs of self-preservation from the interactive Survivor bush guide while you compete in 24 reward and immunity challenges. Play through a full-, half-, or short-season game. And once you're up to the challenge, compete against friends via LAN or the Internet.

3.0 out of 5 stars
3 out of 5
61 global ratings
How are ratings calculated?
To calculate the overall star rating and percentage breakdown by star, we don’t use a simple average. Instead, our system considers things like how recent a review is and if the reviewer bought the item on Amazon. It also analyzes reviews to verify trustworthiness.
Top reviews

PATRICIA WITT SOSA
1.0 out of 5 stars Don't waste your money!
Reviewed in the United States on November 24, 2001
Verified Purchase
I think the people who gave this game 5 stars did not buy it, otherwise they would have been too frustrated to give it 5 stars. I actually loaded and unloaded this game twice because I thought I did something wrong. The game doesn't work. The reward challenge goes so fast and being you don't have control of your mouse, it seems to take on a life of its own, you can't compete let alone converse other with tribal members. The manual is of little use. I'm extremely disapointed in this game. You would have thought after three seasons, there was no rush in designing the game trying to get it on the market before the popularity wore off. I guess it's just a case of poor software designers
Read more
Helpful
Comment Report abuse

kathy obrien
2.0 out of 5 stars Childish
Reviewed in the United States on May 16, 2013
Verified Purchase
This game downloaded very easy.
It is not a very interesting game and very hard to understand.
I do not recommend it to any Survivor fan.

sfquiet
1.0 out of 5 stars Doesn't work
Reviewed in the United States on December 28, 2001
Verified Purchase
The game doesn't work for most people! There is a bulletin board with numerous adverse comments. There are already many patches for errors, etc.
Read more
One person found this helpful
Helpful
Comment Report abuse

B. GOODWIN
2.0 out of 5 stars A Survivor Fan
Reviewed in the United States on December 12, 2001
I am a fan of the Survivor Series, but this game doesn't do it justice though it's not as bad as advertised. You have your choice of which tribe you want to be and which tribe you want to play against. You can either play as one of the Survivors from the TV show or you can make your own custom character. When the game starts, you see some pretty good shots that are from the TV show and you see the real characters when they go fo mail and stuff like that. But then the game gets a little tough too swallow. You have around 3 1/2 to 4 minutes to "talk" to the other characters. It's basically the same questions over and over. Then you have the reward challenge. Some of the challenges are Ok, but most are just stupid. After that, then you go back to "talking" again. Then you do the immunity challenge. If you lose, you vote someone off. There is no way to speed up any of these processes. You have to suffer through some very tedious and boring aspects of this game. The graphics of the characters and of the landscape around you aren't very good and the AI (artificial intelligence) in the game is horrible. I had 3 people in my tribe that I gave weak emotional energy to and talked bad about them and they still thought we had an alliance. A tribe member will say that you should watch yourself and you ask what have you heard and they say not much. That's it. And during the challenges, you can't even see what the other tribe scored or how close to winning they are in most of them. And the internet play, you might as well forget it. I thought it would be fun to play over the internet but because the game doesn't have anyone supporting it, it's nearly impossible find anyone playing it. Now, this game isn't a total waste as it was amusing for a short time and the price is respectable, but they should've put this game together alot better than they did. I'm dissapointed, but at least it amused me for a few hours.
Read more
5 people found this helpful
Helpful
Comment Report abuse

Aidan L.
2.0 out of 5 stars This is supposed to be fun?
Reviewed in the United States on December 30, 2001
Survivor has been one of my favorite television shows since it debuted nearly two years ago. The combination of physical survival and societal survival really appealed to me, and thought a computer game could be potentially awesome... not this one!
When you start playing, you're given the option to choose which edition of survivor to play, but the only one available is Australian Outback. Then, you choose how long of a game you want and who you want to be. Then you begin the "survival period." You're supposed to hurry to pick which task you want to do, but the computer does them all so there's really no point to this at all. Instead, the point of survival period is to chat with your fellow survivors. Nevermind that the dialogue is derivative, stupid, repetitive, and sometimes downright full of non-sequiters. This is how you build alliances and get people voted off.
Unfortunately, you have no way to influence your "allies." One second they'll tell you Colleen has got to go, and the next second they'll vote Rudy off. You can tell them to please vote for Jenna, but they'll vote for B.B. regardless. This really limits the fun factor when you're just hoping they don't feel like voting YOU off.
Then, after a 3-minute survival period, you do a reward challenge. These will be dumb games like shooting arrows at boring targets, answering repetitive questions about the outback (which reappear way too quickly), and stupid races where you click arrows to indicate effort and then click them down once your player begins to get fatigued. This is about the level of a 1982 arcade game, if that.
Then, whoever wins gets a physical and mental boost, which makes you better in later reward challenges (yay) and more points to allocate toward other survivors. It's here that you choose who you like and dislike. Nevermind that your ratings don't have to match with someone else's at all.
After another survival period (it's at this point you'll begin to realize all of the dialogue can be whipped through in two minutes, and you're going to keep hearing "I think I should take a breather" for another 12 episodes) you finally vote people off. After a long, boring, and dull video sequence, you finally vote whoever you want off. Of course, chances are half of the other people will vote someone else out of the tribe. Then, you get to do it all over again. Sound like fun? No? If you're a fan of survivor, wait until it's in the bargain bin ([amt]), and if you're not a fan, avoid this game like the plague.