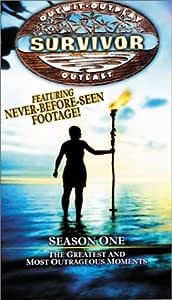 Add to Cart
$14.20
& FREE Shipping on eligible orders. Details
Sold by: Amazon.com
Have one to sell?
Sell on Amazon

Survivor - Season One: The Greatest and Most Outrageous Moments [VHS]

America has spoken. Survivor was one of the rare lightning-in-a-bottle television events that became an instant pop culture phenomenon, like Roots, the first season of Twin Peaks, Who Wants to Be a Millionaire, and Suddenly Susan (just kidding). Sixteen contestants were left to fend for themselves on the most famous tropical isle since Gilligan's. What begins as a happy and healthy competition inexorably turns, in contestant Jenna's words, "malicious and evil." And the whole world was watching.

For devotees of the show who yearn to go back to the island, this two-and-a-half-hour video souvenir replays the most memorable moments of season 1, including all the tribal councils that sealed the castaways' fates. What makes this video collectible are the never-before-broadcast audition tapes (Susan's is a jaw-dropping hoot), as well as each castaway's parting words after being voted off the island (Stacey is particularly bitter). There is gratuitous rodent skinning, uncensored profanity (from Susan and B.B.), and nudity (unfortunately, all Richard). Thankfully, we are spared Sonja's ukulele playing.

The one mystery that remains is why the castaways didn't pull a Lord of the Flies on hokey host Jeff Probst. Even those who originally avoided the show like a rat dinner will have to admit: from Jenna's heartbreak at learning that her video greeting from home did not arrive to Susan's classic what-goes-around-comes-around "snakes and rats" speech, Survivor is compelling television. --Donald Liebenson

4.0 out of 5 stars
4 out of 5
52 global ratings
How are ratings calculated?
To calculate the overall star rating and percentage breakdown by star, we don’t use a simple average. Instead, our system considers things like how recent a review is and if the reviewer bought the item on Amazon. It also analyzes reviews to verify trustworthiness.
Top reviews

Shawna Pierce
3.0 out of 5 stars Avid Survivor Fan---Not that impressed
Reviewed in the United States on December 25, 2003
Verified Purchase
I bought this for my parents since they didn't get to watch the first season. I would have rather watched the full season again than what they considered to be the "highlights".
The DVD starts out showing the castaways upon the boat and traveling to the island. Then you get to see them arriving on the island and setting up camp. From here, the DVD starts introducing the castaways by showing their audition tapes, their audition interview and then a few highlights of their stay on the island. Then they proceed to show you each person getting voted off and what they said after they were eliminated. They follow the order of who was voted off first, second, etc. The DVD also shows a few challenges and more emotional moments of the series, but they didn't show the best parts of the season.
I watched the whole first season and was really surprised of the things they left out during the editting of this DVD. I was very dissappointed and thought that this would be something that my parents would love since they had started watching the shows in the last few seasons. But my dad was nodding off during the viewing and it looked like several (my whole family was watching) were getting bored and watching the clock. It did cause a little discussion after we were finished, but we were mainly talking about what we missed. I really wish they would have shown just the highlights of the season instead of all the interviews and auditions. Watching the whole season in its entirity would have been nice too.

Jill MylesTop Contributor: Coloring
3.0 out of 5 stars A Recap of the Best Season Ever for Survivor!
Reviewed in the United States on April 14, 2002
Verified Purchase
Being a Survivor Junkie myself, I loved it!
However, if you're looking for an in-depth look at the first season, you might find yourself disappointed. This is not a full showing of each episode--you can't find that anywhere. Rather, it's a pasted together collage of bits and pieces from each episode, so you can get the feel of how it went (even if sometimes the story is a bit hard to discern). I liked the added features alot, and seeing the auditions was great -- but the way the actual 'movie' part of the DVD was a bit long, and I found certain parts should have been clipped or cut shorter for the more interesting ones. While I am only nitpicking on the editing, it's still a great flashback to that first season, and if you love Survivor, you have to get this.
I found the 2nd season DVD to be much better edited than this one, though I liked the added features better in this one than in the second one. I'd recommend to anyone that is a true survivor junkie to pick it up.
Read more
Helpful
Comment Report abuse

GP360
5.0 out of 5 stars Just What This SURVIVOR Fan Has Been Looking For
Reviewed in the United States on January 11, 2001
Verified Purchase
ME: Hi. My name is Greg, and I'm a reality show addict.
THE GROUP, IN UNISON: Hi, Greg. Welcome.
Just the other day I reviewed "The Real World You Never Saw," a DVD with new footage from the most recent season of MTV's "Real World." Although the new footage was good, I thought there wasn't nearly enough of it, and the DVD was not worth its cost.
Fortunately, that wasn't the case with the Survivor DVD. I thought it really delivered and that I got a lot for what I paid. The bulk of the DVD summarizes everything that happened throughout the season. It does so by putting the spotlight on each successive castaway in the order in which they were voted off.
The DVD blended new and previously aired footage. I thought the mix was very good. The previously seen material was stuff I definitely wanted to see again anyway. The new footage was stuff that really helped flesh out who these people are and how they interacted with each other on the island. (If only some of the weaker reality shows had such good editors.) I really felt as if this DVD helped me to get to know the castaways better.
In addition, to simply summarizing the season, there were a few segments that weren't necessary for understanding what happened but were great to see. For example, there was a challenge toward the end (right before Colleen got kicked off) where the castaways got to look at themselves in a mirror and guess how much weight they had lost. The person who got the closest received a small food reward. I assume this was never aired because of time limitations, but I was very glad it was included on the DVD. This is exactly the kind of stuff I wanted to see.
From reading the Survivor book, I know there was another unaired reward challenge that took place on the first or second day on the island. If I remember correctly, Joel was the winner. I was surprised that this challenge wasn't also on the DVD, but perhaps the producers felt that it wasn't interesting enough.
Anyway, I enjoyed the DVD very much, and I definitely felt that it was worth the money. If you've never seen SURVIVOR, you might have a bit of difficulty following what's going on on the DVD. (Wouldn't it be cool if the whole series were eventuially released on DVD? I'd love that.) However, if you watched and enjoyed the show, I can't imagine you not enjoying the DVD. It's the perfect thing to tide us over for a few weeks until the new series begins airing.
Read more
16 people found this helpful
Helpful
Comment Report abuse

Teacher/Mom
4.0 out of 5 stars Worth the $$
Reviewed in the United States on January 20, 2020
Verified Purchase
It’s what I expected, though I’d like to see more about the crew and how challenges are put together. For fans, it’s worth it.
Read more
Helpful
Comment Report abuse

Hassaan Abdeen
5.0 out of 5 stars Are you OUT OF YOUR MIND?!!
Reviewed in the United States on April 18, 2001
Verified Purchase
How could a SURVIVOR fan not buy this DVD?!!
Here are the advantags of this DVD: 1. Contains unseen footage, profiles, maps, votings, polls, interviews, confessions. 2. and what I really admired too was an interview with the creator Mark Burnett and the host Jeff Probst discussing and showing the amazing hardwork and emotions put into it.
But if you are after the full episodes of Survivor 1, pray with me that we shall see it on DVD soon!
If you have loved Survivor as much as I did and want to have something to remind you of it, go ahead and buy it... if you have missed Survivor, and want to know what is it about go go go go and see this!
Read more
One person found this helpful
Helpful
Comment Report abuse

Amazon Customer
1.0 out of 5 stars Not as expected!
Reviewed in the United States on February 1, 2019
Verified Purchase
Very disappointing! Says a complete season, mostly just talking to individuals, no challenges. Watching the challenges and rewards helps the rest to make sense. Would not recommend purchase to others.
Read more
Helpful
Comment Report abuse

J
5.0 out of 5 stars Survivor is a Passion....
Reviewed in the United States on January 10, 2001
Verified Purchase
Anyone who did not enjoy the "Survivor" game show must not have watched closely enough. The show had everything a viewer could want--adventure, ruthless human interaction, comedy, some cute people to look at, and a shocking conclusion. Anyone who liked the show is certain to love this uncensored video. It finally allows us to see some of the things that were only hinted at on the CBS show. A+
Read more
5 people found this helpful
Helpful
Comment Report abuse
See all reviews

peter davis
5.0 out of 5 stars Survivor
Reviewed in the United Kingdom on October 3, 2013
Verified Purchase
Great series - am hooked and hope eventually to own the whole set and fail to understand why British t.v. finished after only two series.
Read more
Report abuse

Mike
3.0 out of 5 stars Price
Reviewed in Canada on January 22, 2020
Verified Purchase
Not the full season
Read more
Report abuse
See all reviews