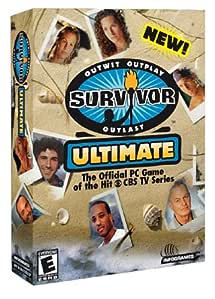 Brand: Atari
Platform : Windows 98, Windows Me, Windows 95 |
Rated: Everyone
3.5 out of 5 stars 23 ratings
Currently unavailable.
We don't know when or if this item will be back in stock.

Ultimate Edition is an Action Adventure game, published by Infogrames, which was released in 2002

3.5 out of 5 stars
3.5 out of 5
23 global ratings
How are ratings calculated?
To calculate the overall star rating and percentage breakdown by star, we don’t use a simple average. Instead, our system considers things like how recent a review is and if the reviewer bought the item on Amazon. It also analyzes reviews to verify trustworthiness.
Top reviews

Timothy
4.0 out of 5 stars Amazing game Hands DOWN
Reviewed in the United States on January 7, 2012
Verified Purchase
I got this game and when I tell it is SO amazing. There is way more strategy involved thank many youtube reviews give the game. Each reward challenge boosts your skills w/ the tribe, so if you win a reward, your skills go up and people will start to like you. The more you lose, one by one someone will dislike you and you'll become a sloppy annoying person on the tribe. The game is always changing that way.. one day your in majority controlling the tribal because everyone loves you, next episode you can tribe switch, half of the tribe doesn't know you, you fail at reward, and then you have only like 3 people favorable of you and the rest aren't and if you don't make deals with the RIGHT people you can get voted off :).

Theres always a way to escape elimination. You have to check how EVERYONE feels about everyone including yourself. Say Tom and Alicia are favorable of you, its smart to NOT vote them off, and try to vote out 2 people that aren't favorable of them or you that a lot of others don't like and that person is most likely to go home if you make deals to get them voted out. But what sucks is that if there is someone that everyone on tribe is favorable of no one wants to vote them off and the only way to get them off is to rely on reward to raise your skills so people will be more likely to vote with you :|.

There is only 1 con to me about this game and taht is at tribal council how that there is no real tie :|. In survivor you can't vote yourself.. but if you make the votes an obvious tie the computer makes someone vote themselves to force someone to go home instead of picking a rock which would be more interesting -_-.

I wish there could be a 2012 version of this game with more recent seasons. But overall, the challenges are FUN because most of the puzzles and games have more than one version to play it so it always changes and its extremly fun, the game is LONG and you always have to THINK like real survivor. I reccomend this to any hardcore survivor fans out there! Its amazing.

Brenda M
5.0 out of 5 stars Fabulous game!
Reviewed in the United States on April 11, 2018
Verified Purchase
Love this game! You can practice and get better at challenges, make it easier or tougher to win. Too bad they don't make this game anymore.
Read more
Helpful
Comment Report abuse

I felt that all of the particiatnts shoud have been included.

mikey43
4.0 out of 5 stars survivor ultimate
Reviewed in the United States on July 19, 2010
Verified Purchase
i liked it a thought it was pretty cool,you can pick a survivor to play and also you were able to pick your tribesmate.
Read more
Helpful
Comment Report abuse

James Hiller
4.0 out of 5 stars A Big Step Forward
Reviewed in the United States on December 17, 2002
I was one of the reviewers who slammed the first release of the Survivor computer game. Unbelievably boring challenges, tedious camp time that just didn't go anywhere, and apparent lack of alliances, it was a major disaster that didn't warrant more than two playings. I hesitated to purchase Survivor Ultimate, thinking that it would be just a re-release of the bad with new Survivors added.
Fortunately, this version is NOT a rehash of the first horrible game, but a big step forward in the right direction. You bascially jump from challenge to challenge, many of them truly fun and enjoyable. A couple of them I just didn't even understand, but did better in them upon repeat plays. My favorites are a tower game, a slot machine game, and a game based on minesweeper.
This game totally eliminates the ineffective camp time with an opportunity to form real alliances. These aliiances only last one episode, but at least you can form them which have impilcations at Tribal Council. Both times I've played, my character's popularity plunged, and I was at fault about what to do. However, my alliances saved me at Tribal Council, and I made it to the final Tribal council, winning one and losing one. Sure the people look fakey, but you have to give some leeway for a 20 dollar computer program!
Overall, I imagine I'm going to play this game repeatedly, but not all the time. It certainly is leagues better than the first release. If you are a Survivor fan, or shopping for one, this may be just the gift for you. See you at Tribal Council!
P.S. The realty game that's really held up, even after two YEARS of playing, is "The Weakest Link". I still whole heartedly recommend that program. I want a new release!
Read more
28 people found this helpful
Helpful
Comment Report abuse
See all reviews