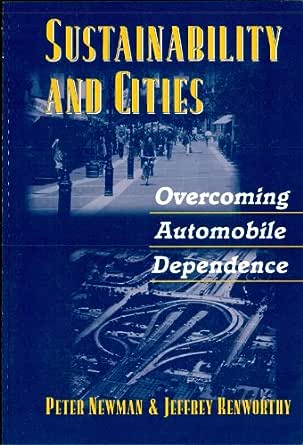 Flip to back Flip to front
Audible Sample Playing... Paused   You are listening to a sample of the Audible narration for this Kindle book.
Learn more
ISBN-13: 978-1559636605
ISBN-10: 1559636602
Why is ISBN important?
ISBN
This bar-code number lets you verify that you're getting exactly the right version or edition of a book. The 13-digit and 10-digit formats both work.

Jeffrey Kenworthy is senior lecturer in urban environments at Murdoch University and is currently visiting professor at the University of Colorado in Boulder. They are co-authors of Cities and Automobile Dependence and Winning Back the Cities.

3.9 out of 5 stars
3.9 out of 5
8 customer ratings
How does Amazon calculate star ratings?
Amazon calculates a product’s star ratings based on a machine learned model instead of a raw data average. The model takes into account factors including the age of a rating, whether the ratings are from verified purchasers, and factors that establish reviewer trustworthiness.
Top Reviews

gardentricks123
4.0 out of 5 stars Review of sustainabilities and cities overcoming Automobile Dependency
Reviewed in the United States on January 24, 2012
Verified Purchase
The book made me stop and think how the automobile has influenced our culture and how it determines many of the decisions that I make. The book is a good read and well worth the price I paid for it.

Lim Eng Hwa
4.0 out of 5 stars A must have in council / municipality library
Reviewed in the United States on November 21, 2013
Verified Purchase
Explains the issue at hand in a descriptive yet easy to follow manner.

Should be able to cater for a wide audience of city planners, transport engineers, environmentalists and others interested in sustainable cities.

Recommended as a must-have for own shelf or office library!
Read more
Helpful
Comment Report abuse

s.j.baddeley@bham.ac.uk
5.0 out of 5 stars Gridlock and bypasses are not the only options.
Reviewed in the United States on November 1, 1999
In "The Life and Death of Great American Cities" written in the 1960s Jane Jacobs embraced complexity as a goal in itself. "How" she asked "can cities generate enough mixture among uses, enough diversity throughout enough of their territories, to sustain their own civilisation?" For Newman and Kenworthy the key idea is sustainability - "one of the most diversely applied concepts among academics and professionals discussing the future..." that "...has cut across all disciplines and professions and has developed many complexities." The car enters Newman and Kenworthy's consideration as a technology of widening individual choice. Why then is the car not the transport technology, par excellence? What unintended consequence has meant its proliferation has blighted the very thing it might have been expected to nurture?
Newman and Kenworthy argue that the car, unlike public transport, offered people who could afford it freedom to live anywhere in a city and get quickly to any other part of it. It appeared to remove the need to plan land-use. Anything could be built anywhere with drivers determining their own routes to and from home to work, shops, schools and entertainment. In the "car-city" - which Newman and Kenworthy distinguish from the "pedestrian city" and the "transit city" - it is possible to develop in any direction and not just along rivers, tramlines or railways. Dispersed low density housing becomes accessible and popular. Town planners can separate residential from industrial zones accelerating decentralisation. Public and commercial buildings no longer need to cluster as a product of the convergence of private and public investment in a particular place. Public transport constricted by timetables and fixed routes becomes second class travel.
Where the car city has been taken to extremes as in Newman and Kenworthy's intellectual territory - America and Australia - the penny dropped soonest. The social consequences that attended driving people off streets and creating boundaries round parks, squares, promenades, pavements - which had served as milieu for human interaction - only began to be widely accepted quite recently. Only now is a wedge of new economic logic being driven between the car and its enduring connection with the good life.
The car, once it ceased to be an indulgence of the rich, always represented a balance between liberation and dependency. Today, the choices promised by cars are linked transparently to those they take away. Everyone knows about exhaust emissions and most drivers, outside of advertisements, experience worsening road conditions. There is growing despondency among those who would like to use their cars less. They realise alternatives won't work unless people switch in large numbers to other ways of getting around. But the public space needed to take to the streets to walk or cycle and take trains and buses is unavailable. Many see public space as hazardous for themselves, and perilous for their children. Deprivations long imposed on people without cars apply, with increasing force, to people with them. New technology may reduce vehicle emissions. It cannot recover the enormous interaction space taken out of circulation by road traffic. Before that lost social space can become available for people outside cars, a legal and moral space has to be reclaimed.
This is why the idea of sustainability is slowly and surely turning into a value. It is the big idea which legitimates unpopular regulation. It offers space for the entrepreneurs of the future, exciting third world policy makers who want to leap a stage in the industrial revolutions of the richer nations. It is the idea around which people are ready to form alliances that go beyond their interests; a concept which "did not come so much from academic discussion as from a global political process." Newman and Kenworthy speak of their book being "many years in preparation", a book that is a "combination of text book and life story" deriving from work with city governments and voluntary groups attempting to address a major global and local issue of how people "can simultaneously reduce their impact on earth while improving their quality of life".
This books aims to show how a city's use of land determines and is determined by its dominant forms of transport. It describes how policies aimed at creating sustainable relationships between humans and their environment necessarily revolve around a city's land-use-transport formula. Getting this right is a prerequisite for urban renaissance.
What makes this book of especial value and its focus provocative is that so many cities and towns are now "auto-dependent". Because cars are sold on the basis of the freedoms they offer, policies to regulate so dominant a form of transport, even when those freedoms are nurtured in the imagination rather than available in the material world, arouse strong protest. Attempts to diversify people's transport choices are regularly characterised as restrictive and even oppressive. Instead of being seen as a catalyst for wealth production, governments addressing challenges to the reputation and wealth of cities caused by "auto-dependence" are seen as depriving large numbers of citizens of fundamental freedoms. The "motorist" has become a late 20th century everyman, affected from all angles by policies to restore a balance in cities between space allocated to rapid movement and space where citizens can engage in civil exchange.
This book is a mine of arguments, backed by statistics, illustrations and graphs. Readers concerned about global warming may be disappointed to find no thinking about the impact of air transport on the sustainability of cities. Officials and politicians thinking of purchasing this text may ask whether it arrays anti-car prejudices against a "normal paradigm" of improving cars and roads and a friendlier planning regime for building of homes and businesses on green field sites. For Newman and Kenworthy that argument is over. Their book is primarily for those who seek to understand the implications of a paradigm which doesn't treat gridlocks or bypasses as the only options.
Read more
34 people found this helpful
Helpful
Comment Report abuse

Maria Attard
5.0 out of 5 stars Excellent
Reviewed in the United States on March 15, 2000
This book has provided a clear insight on sustainable transport strategies and policies which have been adopted in different countries. It is very well explained and I must say that it is the best piece the authors have actually written. It amalgamates the previous work carried out by the authors and therefore is an excellent reference book, which should be present in every transport planner's shelf and in every university.
Read more
12 people found this helpful
Helpful
Comment Report abuse

B. Etgen
5.0 out of 5 stars Its all here...
Reviewed in the United States on July 10, 2005
This excellent book will give you the insight to understand how transportation and cities interact.
Read more
Helpful
Comment Report abuse

Viet Hung Khuat
5.0 out of 5 stars An excellent book for city researchers
Reviewed in the United States on August 30, 2005
This book presents a right track of understanding and solving the problems of today cities.
Read more
One person found this helpful
Helpful
Comment Report abuse
See all reviews from the United States