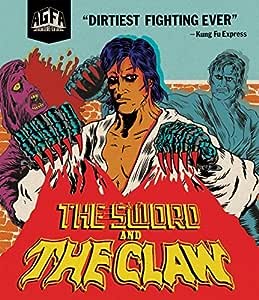 The Sword and the Claw [Blu-ray]

They took his money. They took his family. And now, they've taken his hands. But they can never take his revenge!

Exploding from the same hallucinogenic netherworld as TURKISH STAR WARS, THE SWORD AND THE CLAW stars Turkish genre legend Cuneyt Arkin in his most iconic role. It's CONAN THE BARBARIAN meets The Three Stooges meets DOLEMITE with more lo-fi bloodshed, pop-art visuals, and bizarro dubbing than the boundaries of reality can handle.

4.2 out of 5 stars
4.2 out of 5
21 global ratings
How are ratings calculated?
To calculate the overall star rating and percentage breakdown by star, we don’t use a simple average. Instead, our system considers things like how recent a review is and if the reviewer bought the item on Amazon. It also analyzes reviews to verify trustworthiness.
Top reviews

josh jackson
4.0 out of 5 stars Classic Turkish action with atrocious dubbing..
Reviewed in the United States on July 4, 2020
Verified Purchase
I like this film but they really should of kept it in its original language and did subtitles instead. The English dubbing is the worst ive ever heard. But the film was very laughable and great
Read more
One person found this helpful
Helpful
Comment Report abuse

listener
4.0 out of 5 stars A Turkish Delight.
Reviewed in the United States on February 11, 2018
Verified Purchase
Utter nonsense with a jubilant soundtrack. In these troubled times, we need more heroes like those depicted in this film. All warfare should be this exuberant.
Read more
3 people found this helpful
Helpful
Comment Report abuse

Rafael Amado
4.0 out of 5 stars Buy this film! it's Insanity best served with a cold beer
Reviewed in the United States on February 14, 2018
Verified Purchase
The Sword and the Claw is an insane mess, but fun. Buy this film, its presented in a nice 4K scan. The plot is basically a mish-mash of other action adventure Tarzan styled movies of the era. A man raised by lions, from noble blood helps overthrow an evil lord and gets revenge for his mangled hands. Watch this drunk or with a bowl of gummy-bears and laugh your but off. This movie is so ridicules, you will enjoy it for a dopamine induced laughter itself. I'm sure much is lost in translation and the original Turkish audio would perhaps notch it up a bit, because the English dubbing is ridicules. As an extra you get double cheese theater with the Kung Fu movie BRAWL BUSTERS on a nice 2k scan, also silly in plot. Watch it with friends, family and even turn down the volume and dub it yourself.
Read more
One person found this helpful
Helpful
Comment Report abuse

Bill Carson (Unknown)
1.0 out of 5 stars Claw Of Stupidity!
Reviewed in the United States on February 13, 2018
Verified Purchase
“It's CONAN THE BARBARIAN meets The Three Stooges meets DOLEMITE“
A direct quote from amazons description and horrible wrong. This movie is a boring mess. Editing, dialog and action are all the worst you can imagine. I thought I was going to get a over the top kung-fu type movie but no. It’s mostly sword fights that are horribly choreograph. The claws dont even come in untill the last fight and then they are nothing special or over the top.
Amazon also says that this is a 4k print. Id have to disagree. Its avareage quailty.

The Movie Man
VINE VOICE
2.0 out of 5 stars Turkish Tarzan flick is derivative of many action films
Reviewed in the United States on February 4, 2018
“The Sword and the Claw” is a 1975 Turkish action film. Scheming Commander Antoine assassinates beloved King Suleiman and enters into a forced marriage with Sulieman’s lover, Princess Maria. Princess Alumnia, pregnant with Sulieman’s child, manages to escape but dies soon after childbirth. The baby boy is raised by a pride of lions, growing into a Turkish version of Tarzan. Meanwhile, Alumnia gives birth to another son, Altar, who Antoine believes is biologically his but is actually another son of Suleiman, evidenced by the birthmark the siblings share.

Apart from its obvious Tarzan parallels, the film has elements of 1958’s “The Vikings,” various sword-and-sandal Italian epics, and the Wolverine character. The film was made on a small budget, yet is elaborate in its aspirations, featuring lavish costumes, lots of extras. and impressive production design. The script often lacks logic, but is merely a means of staging one action sequence after another. Acting, for the most part, is of the grand oratory style, which can be unintentionally funny, with dubbed English-speaking actors emoting as if every word uttered has major significance.

Mark Turner
3.0 out of 5 stars TWO KINDS OF TURKEY
Reviewed in the United States on January 30, 2018
AGFA (American Genre Film Archive) is a disc company unlike most. They’re not interested in the newest hit release. As a matter of fact they rarely seem to consider a hit of any kind. Instead they focus on obscure films that most have never heard of but that do exist and give them as much preferential treatment as possible, knowing there is a fan base out there looking for the odd, the quirky and the offbeat. It may be a niche market to some but to fans it is the sustenance of their existence. It is what they crave. At the same time it is rescuing films that might never again see the light of day if it weren’t for someone like AGFA.

Keeping that in mind their latest release has hit stores. THE SWORD AND THE CLAW might seem like an old Hong Kong kung fu movie if you just look at the box but it has nothing to do with that genre or even that country. Instead it’s a movie made in Turkey by the same people responsible for the fan favorite TURKISH STAR WARS, an obvious remake/tribute/rip off of the famous film. This time around they go for their own story though.

The film opens with a major battle between two rulers that’s somewhat lengthy and filled with swords, archers and bloodletting. It’s loosely the Ottoman Empire in the middle of changes once the battle ends, the losing ruler now set in place as a subject of the new king. To add insult to injury the new king is seduced by the deposed ruler’s wife and impregnates her before heading home. He shows her before leaving a birthmark that all male members of his family are born with.

A year later the deposed ruler sets out to reclaim his country just after the king has had a son by his own wife. The child and his nurse escape but before she can get to safety she leaves him in the woods and is killed. The child grows up in the wild with lions and develops into a muscular fighter.

Time passes and both boys grow up, one free in the wilderness and the other at his father’s side, watching the tyrant impose his will with an iron fist. Of course the two will eventually find one another and it then becomes a question of which will change to be like the other or will they kill themselves trying.

It might sound interesting but for the casual viewer not much so. There are plenty of fight sequences and most are overlong and repetitive. The dubbing is what you would expect, along the lines of the previously mentioned kung fu movies. As for the claw in the title, the wild son is captured and his hands burned with acid so he has claws implanted in them so he can continue fighting.

But you have watch this movie in the context of which it was released. It wasn’t made for American markets but for Turkey. Unfortunately I have no idea if it was a hit there or just another standard film. But odds are it was dubbed and released here to play on drive-in double bills and repetitive grindhouse runs.

Along with this film on the disc is a second feature, THE BRAWL BUSTERS. This one IS one of those Hong Kong style kung fu films complete with badly done dubbing and high wire leaps and fight sequences. The story has an abandoned girl growing up, learning martial arts and revenging herself against those that left her an orphan with her own specially selected team. At best it gives fans another movie to watch and at worst it’s kind of confusing to catch what is going on when. The end result is not the best example of the genre.

While AGFA is releasing them on blu-ray with the first feature a 4k scan of the only 35mm print available it doesn’t mean they’ve been cleaned up to perfection. There are still the scratches and splices seen on the screen while watching. But wouldn’t that have been part and parcel with how they were viewed in those seamy grindhouses back when first released? So if you’re a fan of those films it won’t matter.

The extras are limited but the odds of finding a “making of” featurette or interviews with cast and crew are pretty much ridiculous to expect. Instead there is a collection of action film trailers for films that would fit right into playing with either of these films.

The end result is two movies that mainstream audiences would probably overlook but that fans of drive-in and grindhouse entertainment will love. It’s the kind of movie you don’t take to seriously, that drinking games could be based around and that would play well in the background while a party was going on. In short a movie that fans will adore and want in their collection.
Read more
6 people found this helpful
Helpful
Comment Report abuse
See all reviews

neil ross
3.0 out of 5 stars Ehhhhhhhhh
Reviewed in Japan on November 19, 2019
Verified Purchase
Seems to be cut. Running time listed does not match the viewing time.
Read more
Report abuse
See all reviews

Page 1 of 1 Start overPage 1 of 1
This shopping feature will continue to load items when the Enter key is pressed. In order to navigate out of this carousel please use your heading shortcut key to navigate to the next or previous heading.
Back
Next
Pages with related products. See and discover other items: Best trampolines for lake, Best indian swings for baby