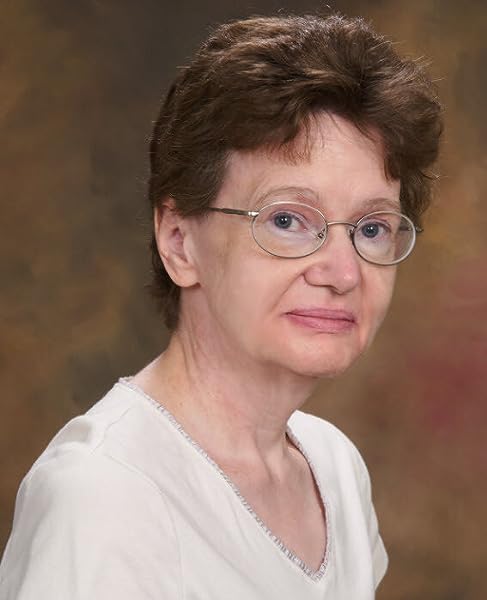 Joan Marie Verba earned a bachelor of physics degree from the University of Minnesota Institute of Technology and attended the graduate school of astronomy at Indiana University, where she was an associate instructor of astronomy for one year. She has worked as a computer programmer, editor, publisher, health/weight loss coach, and social media manager. An experienced writer, she is the author of the nonfiction books Voyager: Exploring the Outer Planets, Boldly Writing, and Weight Loss Success, as well as the novels Countdown to Action, Action Alert, Deadly Danger, Situation: Critical, Extreme Hazard, and Danger Zone, plus numerous short stories and articles. She is a member of the Science Fiction and Fantasy Writers of America, and the Society of Children's Book Writers and Illustrators.

Start reading Sword of Queens on your Kindle in under a minute.

4.2 out of 5 stars
4.2 out of 5
35 global ratings
How are ratings calculated?
To calculate the overall star rating and percentage breakdown by star, we don’t use a simple average. Instead, our system considers things like how recent a review is and if the reviewer bought the item on Amazon. It also analyzes reviews to verify trustworthiness.
Top reviews

John Charles
5.0 out of 5 stars A Mystery Thriller that takes place in an Abstract, Magical World of Intrigue!
Reviewed in the United States on September 24, 2012
Verified Purchase
Verba brought me into her web of intrigue from the beginning of the book. Who is Tashtalon? Is he a God? Why would he devour a sleeping boy? Did he really devour anyone or was that just a ploy for some other sinister goings on? I needed answers, and I also needed to understand this world. Not only was Gill's city ruled by men, women were not permitted to carry swords, could not take interest in politics, had to wait for a man to ask for their hand and it seemed were alive only to serve.

Magic ruled this strange city and those who lived within it's boundaries either accepted the magical peace or were "Devoured by Tashtalon." Stories and lore suggested that women were dis-empowered because it was believed they were the only ones who could defeat Tastalon. How could a woman defeat a god?

As the story progressed, Verba spun a web of intrigue that kept me interested to the last page. I not only enjoyed reading Sword of Queens, I was disappointing when I finished.

If you enjoy fantasy, thrillers, you may also enjoy:

JcatTop Contributor: Pets
TOP 500 REVIEWER
4.0 out of 5 stars 3-1/2 Stars--Good Fantasy/Sci-Fi with a strong Heroine.
Reviewed in the United States on February 19, 2015
Verified Purchase
This book was proofread well, had a nice style, and kept me reading to the end. The storyline was interesting, and the action was satisfying. It would make a good YA read, as there was no strong language or sexual scenes. No Cliffhanger, which I always appreciate.

The main character, Gill, frequently had to share her body and consciousness with two other beings. There was magic and alien aspects, and the plot premise was intriguing as a result. The supporting characters were many and varied.

However, the World Building didn't seem very complete to me. Many things that seemed important to the storyline weren't given enough explanation, or the explanation seemed incomplete. And although she was a strong female Heroine who never complained or whined, Gill wasn't developed well enough personality-wise to make me really feel as if I knew her. As a result, I never cared all that much what happened to her.

I enjoyed this read, but don't think I would be interested enough to read a sequel.
Read more
Helpful
Comment Report abuse

Kindle Customer
4.0 out of 5 stars Who is Tashtalon and why does he fear women?
Reviewed in the United States on April 3, 2014
Verified Purchase
Gill is a young woman living in a place where everyone is put into a sleep at night - and some people disappear during that night. Women are forbidden to carry swords, because it was women's fault that any problems ever happened to her kingdom. The sleep is brought on by Tashtalon, the god who has "protected" her community for over 500 years. He's also the one who steals people in the night - maybe to devour them, but who knows.

Well, we all know that there's something wrong with this set up. Gill has a friend who is positive that there is a way to over throw Tashtalon, but unfortunately, it appears that Tashtalon knows about this plot, and Gill's friend is ruthlessly killed. At that point, Gill discovers that her family holds a key (a real key) that will aid in the destruction of Tashtalon, and she sets off on a journey to overthrow the "god".

D. Waisner
5.0 out of 5 stars Imaginative world created, brave young Heroine
Reviewed in the United States on September 21, 2012
Verified Purchase
If there were 10 stars available I would give this book all 10 stars. The author has created an imaginative and compelling story. I was easily transported to a different time and place and found myself riveted with each passing chapter. The story is a a coming of age, an awakening, a quest, and overcoming of an "evil" that was once not so. It is an easy read and contains nod to myths and legends with a hint of sci-fi in the fantasy world the author created. Wonderful book and excellent !!!!!

Carmen F.
5.0 out of 5 stars A great page turner!
Reviewed in the United States on June 4, 2017
Verified Purchase
I enjoyed this story of how a girl challenged an in ground belief . It was an adventure to read, I really recommend-this book , I could hardly put it down! Enjoy!
Read more
Helpful
Comment Report abuse

HRA
4.0 out of 5 stars Different, but good
Reviewed in the United States on November 2, 2013
Verified Purchase
This book was great entertainment for pool side reading. Sure, sometimes I felt as though things were kind of made up to help the book make sense or give the characters a leg up, but it's fantasy, so Verba can make up all she wants. Despite some weird additions later in the book (like magical "cell phone" like devices in the last 1/3 of the book) all in all this was a great story, different than what I'm used to.
Read more
Helpful
Comment Report abuse

Kindle Customer
5.0 out of 5 stars Very imaginative.
Reviewed in the United States on May 10, 2013
Verified Purchase
I couldn't put this book down. I just loved the fact that the main character was a warrior woman. Great read for young and old alike. Nice new concepts for a fantasy. Read this book, you won't be disappointed.
Read more
One person found this helpful
Helpful
Comment Report abuse

Joanna
5.0 out of 5 stars A page turner
Reviewed in the United Kingdom on November 5, 2012
Verified Purchase
After recently reading quite a few mediocre books this was a real pleasure to read. The world was really interesting and there were some really novel ideas - the sleep of Tashtalon for example was the thing that got me hooked on the book.

The story involves torture and cruelty, but the way the book is written gives it a bit of a legend or fairy tale feel to it. Due to this the violence maybe didn't seem as real as it could have been. For the same reason at points the characters felt a bit flat (and a bit black & white), and I would have liked a few more surprising twists and turns, especially towards the end.

Despite that, the book was an exciting page turner and the setting was definitely the thing that kept my attention the most. One thing worth mentioning is that although this is mainly a fantasy story, a bit of sci-fi seemed to be creeping in here and there.
Read more
Report abuse

Rob
5.0 out of 5 stars Watch out for the hero
Reviewed in the United Kingdom on September 20, 2012
Verified Purchase
Do you remmeber Tomb Rider and how Lara Croft totaly changed gaming scene with its woman can be heroine too?

Great story with magic, nearly immortal race and in middle of it... a woman.

Great gift to yourself or maybe to your friends.

As long as the story is, I just couldnt put it down...
Read more
Report abuse
See all reviews