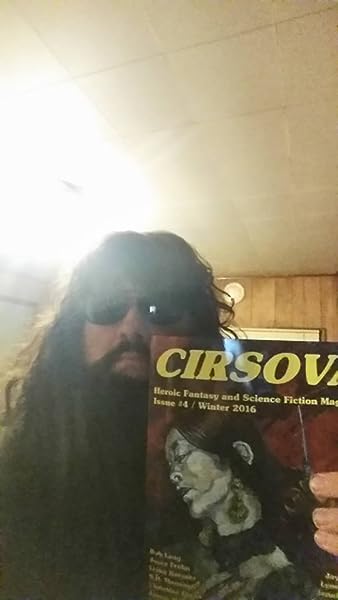 2.8 out of 5 stars
2.8 out of 5
3 customer ratings
How does Amazon calculate star ratings?
Amazon calculates a product’s star ratings based on a machine learned model instead of a raw data average. The model takes into account factors including the age of a rating, whether the ratings are from verified purchasers, and factors that establish reviewer trustworthiness.
Top reviews

Richard Fisher
VINE VOICE
2.0 out of 5 stars Several diamonds in the rough
Reviewed in the United States on October 8, 2019
When I discovered this series and it's novel premise I was all in. I bought all three attractive 'classic' sized paperbacks and have slowly been making my way through them. In mid-October DMR books is set to release all three books as an omnibus with three new stories.

First of all a complaint, the print in this sucker is fine. Small. Hard on the eyes. Makes reading it a chore.

This anthology has a little bit for everyone. Several stories, several poems, and a very interesting essay written by the legend, David C. Smith.

My favorite story is the Forgotten City of Tehm. Caravan beset by bandits, our heroes are racing across the desert for their lives. Seeking sanctuary from the bandits and a sandstorm they decide to hide in some ruins. Ancient safeguards within the ruins may be everyone's demise.

Voyage on Benighted Seas is the second part of Byron Roberts' Blackthorne trilogy. Beneath the Dead Lake, Red Ochre, and Heart of the Betrayer are also worth a read. Although, Betrayer works best in Bentley's The Snake-Man's Bane.

The rest is just not for me. I don't dig poetry or verse and the remaining stories are more horror than S&S, with no swords in sight. This anthology, like the middle child it is, is quiet, dark, and unassuming.

Jon Zaremba
5.0 out of 5 stars Writing that captures the honesty, ferocity, and beauty of barbarity.
Reviewed in the United States on March 26, 2016
I am so glad that this aesthetic is still alive and vibrant amongst the music, artistic, and literary underground. Heavy metal is the last bastion of pure maleness left untainted by modern PC culture. The music is timeless and will always be visceral...but being truly immersed in the story is a whole nother experience. That's what makes Swords of Steel II special. It's like a deeper look at the infrastructure of the these fine musician's craft. These stories are what's going on in their minds as they compose and perform. It's a conscious, focused, and deliberate expression of the characters and stories that their music is all about.

In these anthologies, I tend to gravitate towards the work of Howie Bentley (Cauldron Born and Briton Rites) the most. In Swords of Steel II, he gives us two pieces: "The Sword of Shaitan" and "The Heart of the Betrayer".

"The Sword of Shaitan" is a well-written poem that beautifully paints scenes of horror and vile destruction. Of course, so does "The Heart of the Betrayer", but on a more broad scale. This story features our beloved Thorn. I suppose he is the Cauldron Born "mascot", but I have trouble using that word in relation to him. I'd imagine Thorn wouldn't appreciate it either. He's a god slayer. And a witch maker. And his attitude and stance is one of the things that makes Howie's stories so compelling to me. Thorn is not the charitable type. He is summoned and intervenes for his own gain. His personal conquests may help the cause of some human in our realm, but that is not his sole purpose...merely a side effect of his ambitions.

"The Heart of the Betrayer" carries on some time after "All Will Be Righted on Samhain", showing how the relationship between Thorn and Bunduica having grown somewhat. Thorn assists a marauding warrior to seek revenge against the one who betrayed him (and the woman who made it possible). The story is unabashedly told from a male point of view. There are no apologies for what takes place. Without spoiling the story, just know that Howie dives in where other fantasy writers might back away. He's the Fulci of the genre...getting right in there with the camera rather than cutting to someone's expression of what they are seeing.

And honestly, that sentiment is what you'll find in much of Swords of Steel II. With so much of the fantasy genre being made up of sandal-wearing crop circle chakra types, it pleases me to no end that we still have writers who are unwavered by our modern metro culture and who can majestically express the honesty, ferocity, and beauty of barbarity. These books are bound to be highly sought after in the future. At the moment, they're not available in digital format. I hope it stays that way. If you like metal then you'll probably enjoy Swords of Steel II (and volume 1).

Poserdestroyer
5.0 out of 5 stars this book was like Jumanji.
Reviewed in the United States on March 16, 2016
this book was like Jumanji....with each story the characters came to life and tried to get me. One minute a barbarian with a double edge sword was after me from story number 2 then an evil spirit from the depths of adjective hell was after me minutes later from story 5. I highly recommend this book written by well rounded men who love swords and wearing no shirts. For what you are getting you get your gold coins worth. I cannot say enough good things about this book...I have to go...a army of goblins are approaching.
Read more
One person found this helpful
Helpful
Comment Report abuse
See all reviews from the United States