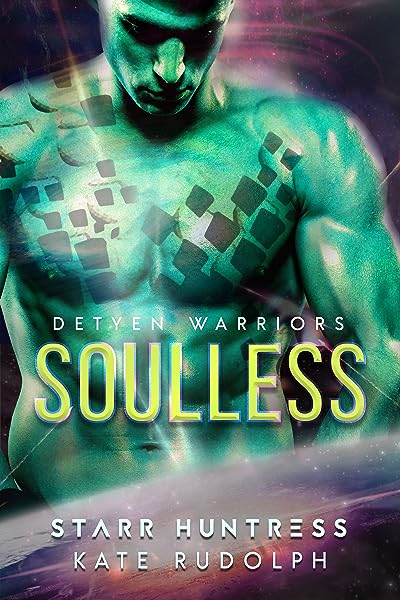 Start reading Synnr's Saint (Zulir Warrior Mates Book 1) on your Kindle in under a minute.

4.5 out of 5 stars
4.5 out of 5
51 customer ratings
How does Amazon calculate star ratings?
Amazon calculates a product’s star ratings based on a machine learned model instead of a raw data average. The model takes into account factors including the age of a rating, whether the ratings are from verified purchasers, and factors that establish reviewer trustworthiness.
Top Reviews

Michelle
4.0 out of 5 stars Alien abduction with a twist but a little cliffhanger
Reviewed in the United States on May 17, 2020
Verified Purchase
This is a group alien abduction story. Both women and men were abducted from earth and were used for experiments and also for entertainment to finance the experimentation. Emily and some other humans manage to escape and get caught up in a political war. Emily and Oz get their hea but I disliked the way I felt the book left things hanging both about their personal future and also about the upcoming war.
Read more
One person found this helpful
Helpful
Comment Report abuse

Cindy Murphy
5.0 out of 5 stars A fantastic alien/human romance
Reviewed in the United States on May 31, 2020
Verified Purchase
Interesting start of a new alien/human series based on a planet having a civil war. The characters are all well described and very different. The humans were enslaved and forced to provide entertainment for a paying audience by night and undergo testing by day. One of the spies, Oz, saw Emily’s performance and decided to help. Lots of adventure, suspense, romance,twists and turns. You really need to read this science fiction book.
Read more
Helpful
Comment Report abuse

Lori
5.0 out of 5 stars Survival to Escape
Reviewed in the United States on May 13, 2020
Verified Purchase
Kidnapped humans come together with each other and with aliens to escape evil scientists and slavers. Sparks literally fly as two find a match while on the run.
Read more
One person found this helpful
Helpful
Comment Report abuse

Amber Voyles
4.0 out of 5 stars 👍👍
Reviewed in the United States on May 15, 2020
Verified Purchase
This book had a solid story line, great world building and well rounded characters. I am looking forward to continuing the series.
Read more
Helpful
Comment Report abuse

Nikki Brooks
VINE VOICE
4.0 out of 5 stars On this plant being a Synnr is a good thing!
Reviewed in the United States on May 23, 2020
Emily and her fellow Earth abductees have learned to entertain or die. When they are not being carted off to be experimented on, She and her fellow Earthlings are expected to perform like trained animals for their captors. Her gymnastic ability has never been a handier talent to have.

Oz may look like her abductors but he is nothing like them on the inside. His planet is split by morals and outlook rather than what they look like. The Apsyns are deplorable xenophobes. Oz and his team are much happier to have a wider pool of people to attempt to find a mate with.

But Oz missteps in his plans to rescue the Earthlings from their captivity when he tries to "buy" his human flier! Now he's going to have to work even harder to get her to trust him!

Emily and the others; Lena, Luci, Zac & Joel soon find themselves rescued but are they really any better off?

I loved that Emily was able to use her education as a lawyer on Earth in her new found freedom. Her gymnastics may have saved her butt but it's her mental talents that are just as much use in her new normal! Oz makes a bit of a hash of rescuing his potential mate and I love how he has to essentially grovel to get her back. They abilities they share later are amazing! The little twist of the Earthlings capture was one I did not see coming.

GlassRiver
5.0 out of 5 stars New series
Reviewed in the United States on May 15, 2020
I think I’m am going to enjoy this new SFR series from Kate Rudolph. I followed the Detyen stories in the most recent series ‘til now, but the Zulir franchise appears to be really new, not just in comparison with other Kate Rudolph SFR, but also much of the genre in general. First of all, planet Earth is not the central focus, although a few Earth former residents are in this first in series. Secondly, the aliens, while all from the same planet and appearance, actually represent different groups, who are eventually at war with each other. Our H/h couple also is generally different too. Instead of being wealthy, a ‘connected’, military commander, or wunderkind, Oz is a lower echelon (but still outstanding), soldier. He also has a personality that takes a bit of getting used to—he is not exactly socially adept or overly self-confident. Childhood/teen gymnast and now a new lawyer before being taken from Earth, Emily initially takes a stand-back attitude but quickly decides to take more of a leadership role with the other Earthers, but to a certain extent, also in her relationship with Oz. Everything works out well though and the book has a great, convoluted (meaty) plot, good secondary characters, and a HEA for the primary couple. Well worth reading! I voluntarily read and reviewed an advance copy of this book.
Read more
One person found this helpful
Helpful
Comment Report abuse

Danea55
5.0 out of 5 stars Now I want wings! The hot guy would be a bonus.
Reviewed in the United States on May 13, 2020
A fantastic new alien series by Kate Rudolph! If you liked her Detyen warriors, you'll love her Zulir! This is a wholly different setting with completely different characters and alien races, so be ready for a new adventure.

Oz is a pretty average soldier living a pretty normal life besides the whole inter-species divide that has them at war thing, and I think that might be what had me adoring his story the most. It's a nod to the notion that everyone has a destiny and sometimes it might be something completely different than what you could have dreamed.

Emily, in contrast, was a pretty stellar example of a human. I really liked her stubborn side and the fact that she never lost herself despite all that happened. She and Oz made a great opposites pairing in my opinion.

Anyhow, if you like aliens (with wings, lets not forget the electric wings), feisty heroines far from home, action and adventure, some really awesome romance, a little bit of steam, and an all around entertaining new universe, this is a book you should pick up. I look forward to Solan's book next!
Read more
One person found this helpful
Helpful
Comment Report abuse

book lover
5.0 out of 5 stars Synnr's Saint, you're not going to want to miss this one!
Reviewed in the United States on May 16, 2020
Oz is a Zulir warrior and he excels in all he does. He is on the planet Kilrum for a specific job. He doesn't have time for a human woman, no matter how distracting she is. Emily is a lawyer and a gymnast. Little does she know that her gymnastics skills will be extremely useful at a future date. Emily and four of her friends, Lena, Luci, Zac, Joel are kidnapped by Apsyn aliens and taken to the planet Kilrum where they will be lab rats for these aliens. Doomed to be tested and experimented on daily and expected to entertain these horrible creatures every night. Their lives have been basically taken from them and they are in a place where they only have themselves to try to get out of this horrific nightmare. Sounds incredible right? But where's the hot and steamy? Oh it's in there. In fact this book is so good you'll want to read it all in one sitting. I know, I didn't even want to sleep, the anticipation was unreal. Simply one of the best alien romance books available. But, what can I say...I mean it is Kate Rudolph.
I voluntarily read and reviewed this book and this is an honest.
Read more
One person found this helpful
Helpful
Comment Report abuse
See all reviews from the United States

Kindle Customer
5.0 out of 5 stars Great
Reviewed in the United Kingdom on May 15, 2020
Verified Purchase
Another new series full of adventure with a very good storyline. Waiting for the next in the series to be released can't be soon enough.
Read more
Helpful
Sending feedback...
Thank you for your feedback.
Sorry, we failed to record your vote. Please try again
Report abuse

Kindle Customer
4.0 out of 5 stars A wild ride!
Reviewed in Australia on May 16, 2020
Verified Purchase
Excitement by the bucket load keeps the reader involved with the characters and their problems. A regular dose of reality moves the story forward at a fast pace while revealing the characters of the protagonists. Love and adventure....what could be better ?
Read more
Helpful
Sending feedback...
Thank you for your feedback.
Sorry, we failed to record your vote. Please try again
Report abuse