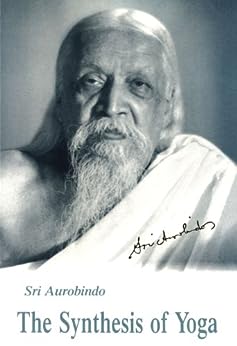 by Sri Aurobindo (Author) Format: Kindle Edition
See all formats and editions
Sorry, there was a problem loading this page. Try again.
"Truth of philosophy is of a merely theoretical value unless it can be lived, and we have therefore tried in The Synthesis of Yoga to arrive at a synthetical view of the principles and methods of the various lines of spiritual self-discipline and the way in which they can lead to an integral divine life in the human existence".
Read more
Previous page
Next page

Sri Aurobindo has been considered one of the foremost philosophers of the 20th Century, but he was far more than just a philosopher. He was a political activist, a mystic, a spiritual leader and a poet, a yogi and a teacher. --This text refers to an alternate kindle_edition edition.

"The Synthesis of Yoga was not meant to give a method for all to follow. Each side of the Yoga was dealt with separately with all its possibilities, and an indication was given as to how they meet so that one starting from knowledge could realise Karma and Bhakti also and so with each path. It was intended when the Self-Perfection was finished, to suggest a way in which all could be combined, but this was never written."

The Synthesis of Yoga is a reorganization and continuation of The Life Divine, richer in detail and potential. The Method is found in The Mother and the lETTERS ON YOGA

The style is the ususl opulence. Midway through we find:

"But even if this difficult thing were perfectly accomplished, still the intuition would not be the gnosis; it would only be its thin prolongation into mind or its sharp edge of first entrance. The difference, not easy to define except by symbols, may be expressed if we take the Vedic image in which the Sun represents the gnosis and the sky, mid-air and earth, the mentality, vitality, physicality of man and of the universe. Living on the earth, climbing into the mid-air or even winging in the sky, the mental being, the manomya purusa, would still live in the rays of the sun and not in its bodily light. And in those rays he would see things not as they are but as reflected in his organ of vision, deformed by its faults or limited in their truth by its restrictions. But the vijnanamaya purusa lives in the Sun itself, in the very body and blaze of the true light; he knows this light to be his own self-luminous being and he sees the whole truth of the lower triplicity and each thing that is in it. He sees it not by reflection in a mental organ of vision, but with the Sun of gnosis itself as his eye, -- for the Sun, says the Veda, is the eye of the gods. The mental being, even in the intuitive mind, can perceive the truth only by a brilliant reflection or limited communication and subject to the restrictions and the inferior capacity of the mental vision; but the supramental being sees it by the gnosis itself, from the very centre and outwelling fount of the truth, in its very form and by its own spontaneous and self-illumining process. For the Vijnana is a direct and divine as opposed to an indirect and human knowledge. ~ Sri Aurobindo, SY. 481"

One will note his use of the elements of poetry in the passage; and no study of Aurobindo can be satisfying or complete without a copy of Savitri at hand.
Read more
6 people found this helpful
Helpful
Report abuse

777WCG
5.0 out of 5 stars Must read for truth seekers
Reviewed in the United States 🇺🇸 on June 16, 2021
Verified Purchase
Great wisdoms for easy to continue reading over and over. I suggest you read this more than once to obtain all the benefits
Read more
Helpful
Report abuse

Maia
3.0 out of 5 stars Stinky!
Reviewed in the United States 🇺🇸 on January 27, 2020
Verified Purchase
The book is great so far, but smells so heavily of glue that its hard to read for long periods of time without getting a headache. I have let air out, boxed it up with baking soda, and even put it in a tub with lit incense...still unbearable. I recommend buying used.
Read more
Helpful
Report abuse

Kim A Broadie
5.0 out of 5 stars Synthesis of Yoga
Reviewed in the United States 🇺🇸 on June 21, 2014
Verified Purchase
This is a comprehensive presentation of the essence of spirituality. It goes beyond traditional or even Hinduism to explain the myriad ways that man can approach the Divine. As a Christian, I find it illuminates the writings of New Testament writers such as John and Paul. This is not for the dabbler. Only serious seekers will benefit from the immense wisdom in this book.
Read more
6 people found this helpful
Helpful
Report abuse

Mob Books
5.0 out of 5 stars Excellent!
Reviewed in the United States 🇺🇸 on October 29, 2014
Verified Purchase
Few spiritual writers have inspired me as much as Sri Aurobindo. Even complex material like this is written in easily accessible language. Highly educated and literate, Sri Aurobindo has truly changed my spiritual outlook with his writing. I used to read a lot of Paramahansa Yogananda, but I find this material far more interesting and poignant. Bravo!
Read more
6 people found this helpful
Helpful
Report abuse

Rubedo
5.0 out of 5 stars The Book I have been looking for
Reviewed in the United States 🇺🇸 on February 14, 2009
Verified Purchase
This is the sort of book that is an automatic meditation as it is read. Read slowly it might take a year or more to get through. But you get enough each day to satisfy. When done with it, start over. But then, Aurobindo has so many writtings, maybe best to move on to another. What a genius! I can't get over how clearly he writes about such ineffable things. "All life is yoga".
Read more
12 people found this helpful
Helpful
Report abuse

Elizabeth
5.0 out of 5 stars Good
Reviewed in the United States 🇺🇸 on March 28, 2019
Verified Purchase
Gift for boyfriend who was happy with purchase and quality.
Read more
Helpful
Report abuse
See all reviews

TheRebelSeeker
5.0 out of 5 stars Excellent but serious!
Reviewed in India 🇮🇳 on April 28, 2015
Verified Purchase
Excellent but not easy read! Aurobindo's work, be it Essays on the Gita, or Isha Upanishad, is no easy read. But it is "hardcore" philosophy, and if you dare to enter there, you will be rewarded with a changed outlook towards life.
Read more
10 people found this helpful
Report abuse

Himanshu Madhogarhia
5.0 out of 5 stars Yoga of Divine Nature
Reviewed in India 🇮🇳 on August 4, 2021
Verified Purchase
Individual to Collective Yoga, Yoga of the Divine Nature! Beautiful and detailed work, must read for a Sadhaka on the path of Integral Yoga
Read more

5.0 out of 5 stars Yoga of Divine Nature
Reviewed in India 🇮🇳 on August 4, 2021
Individual to Collective Yoga, Yoga of the Divine Nature! Beautiful and detailed work, must read for a Sadhaka on the path of Integral Yoga
Images in this review

pradeep kumar
4.0 out of 5 stars Four Stars
Reviewed in India 🇮🇳 on October 31, 2016
Verified Purchase
All of around book are difficult to read but they r rich in content
Read more
One person found this helpful
Report abuse
See all reviews
Report an issue
Does this item contain inappropriate content?
Report
Do you believe that this item violates a copyright?
Report
Does this item contain quality or formatting issues?
Report