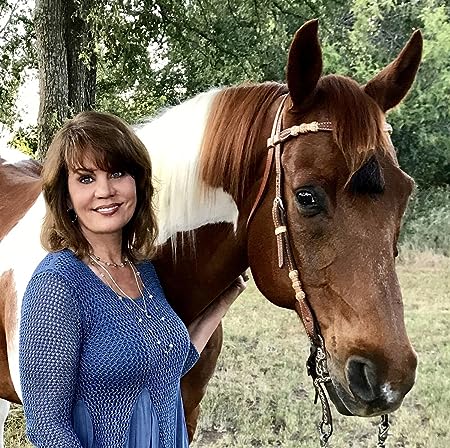 A native Texan, T.K.’s life experiences and world travels fuel her ever-expanding imagination that she pours into everything she writes. Combining history with fiction, fact with fantasy, she delivers stories that, at some point along the narrative, always have horses making their presence known.

T.K. and her husband live in north-central Texas on a small ranch they share with a variety of four-legged friends: equine, canine, feline, and bovine. Their three grown children are scattered across the globe. When not on horseback, T.K. enjoys international travel, snow skiing, photography, and collecting antique deviled egg plates. (The egg plates are a long story—feel free to email her at tanya@tklukas.com for that explanation. She’ll be delighted to share it with you, along with some favorite deviled egg recipes!) 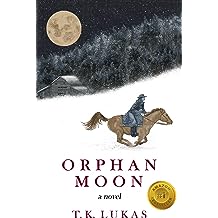 Orphan Moon (The Orphan Moon Trilogy Book 1) Apr 3, 2015
by T. K. Lukas
( 193 )
$9.99
An epic saga of adventure and grit on the edge of the western frontier, Orphan Moon demonstrates the power of a courageous human spirit in the face of tragedy, loss, and the struggle to survive.

PRAISE FOR ORPHAN MOON: "It's no surprise this book gained acclamation in several book awards. As I read along, this novel had me cheering, crying, and white-knuckling my Kindle. The book flows with themes of romance, dark family secrets, past family conflicts, hope and dreams, and the primal instinct of survival!" The Curious Dame - Amazon Five-Star Review

1860 - Palo Pinto, Texas. Under the spectacular glow of a Comanche moon, a family is slaughtered, their homestead torched. Nineteen-year-old Barleigh Flanders survives the terrifying midnight raid. Fiercely determined to rebuild, she seizes an opportunity meant for another. Desperate, near penniless, her foolhardy scheme could prove calamitous, yet it's her only hope.

Her grueling physical journey stretches from Texas, to Missouri, and into the rugged Utah Territory. However, it's her emotional journey that takes her to places of uncharted darkness, discovery, and redemption when old family secrets are revealed. What she accepted as her past turns out to be an elaborate lie that reaches across generations, reshaping her memories of the Grandfather she despised, the father she adored, and the mother she never knew.

Along her journey, she encounters a mysterious stranger. In Hughes Levesque, Barleigh gains an unsought ally with dark secrets of his own. A Texas Ranger turned hired gun, Hughes makes it his personal mission to keep Barleigh safe. Doing so may cost him his life, his job, and his heart, none of which he's keen to lose. Orphan Moon is a heart-wrenching saga of family love, loss, and betrayal. Both a gripping adventure and a timeless love story, it gallops across the bleeding edge of the western frontier.
Read more
Other Formats: Audible Audiobook , Paperback 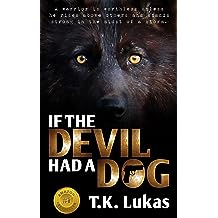 Sidney McQueen flees to the small, west Texas town of Alpine to escape the most dangerous man she’s ever known—her estranged husband—a powerful attorney with ties to Mexican drug cartels. When circumstances throw her into the path of Markus Yeager, he is immediately suspicious. And, when Sidney reveals she possesses something her soon-to-be-ex is hell-bent to retrieve, Markus becomes embroiled in a world he thought he had left far behind.

A former Marine turned CIA operative, Markus has a top-secret past with the physical and emotional scars to prove it. He is drawn into Sidney’s life-or-death situation, where weapons, drugs, and money are the only gods—a world where dangerous traffickers stop at nothing to get what they want.

As their mutual need draws them closer, Markus and Sidney discover a deadly predator whose web of treachery leads to terrifying violence. In a frantic race against time, can they stay one step ahead, expose a dangerous cartel, and bring a murderer to justice?

IF THE DEVIL HAD A DOG – an explosive psychological thriller that sinks its teeth in and never lets go.
Read more
Other Formats: Paperback