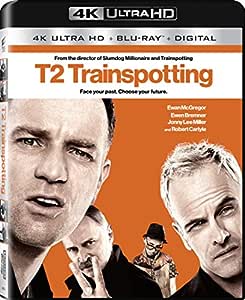 First there was an opportunity......then there was a betrayal. Twenty years have gone by. Much has changed but just as much remains the same. Mark Renton (Ewan McGregor) returns to the only place he can ever call home. They are waiting for him: Spud (Ewen Bremner), Sick Boy (Jonny Lee Miller), and Begbie (Robert Carlyle). Other old friends are waiting too: sorrow, loss, joy, vengeance, hatred, friendship, love, longing, fear, regret, diamorphine, self-destruction and mortal danger, they are all lined up to welcome him, ready to join the dance.

4.2 out of 5 stars
4.2 out of 5
168 customer ratings
How does Amazon calculate star ratings?
Amazon calculates a product’s star ratings based on a machine learned model instead of a raw data average. The model takes into account factors including the age of a rating, whether the ratings are from verified purchasers, and factors that establish reviewer trustworthiness.
Top Reviews

Richard J. EstepTop Contributor: Batman
5.0 out of 5 stars A worthy continuation of an absolute classic
Reviewed in the United States on June 28, 2017
Verified Purchase
For Brits of a certain age, the first "Trainspotting" movie defines the summer of 1996. Along with an incredible soundtrack (the CD was a massive hit, as was the film itself) the tale of heroin addicts struggling to survive and thrive in Edinburgh -- unlikely heroes if ever there were any -- influenced an entire generation. The characters became much-beloved, and although writer Irvine Welsh (author of the novel on which the film was based) wrote a sequel ("Porno") we had to wait for 20 years in order to follow up with their cinematic incarnations.

Was it worth the wait?

In my opinion, oh yes. Screenwriter John Hodge has taken a few aspects of "Porno" and crafted them into a worthy sequel. Renton, Sick Boy (now "Simon"), Spud, and the psychopathic Begbie are all back, and it feels great to see them again. For fans of the original, watching "T2:Trainspotting" really is like catching up with old friends. Without spoiling the movie's plot, our four protagonists (plus some of the other characters from the first film) are back, and on a collision course with one another that can only end violently. Having ripped off Sick Boy and Begbie at the end of the first film, Ewan McGregor's Renton is back from Amsterdam and ready to fall back in with his old crowd. At the same time, Begbie escapes from prison, and when he learns that Renton is back in town, sets out for vengeance. Waiting for the characters to fulfill their story arcs will keep you on the edge of your seat. Accompanied by a thumping good soundtrack (though not quite the classic that the first movie's soundtrack was) "T2:Trainspotting" is a rollicking good time for fans of the original. In terms of the Blu-Ray release, sound and picture quality are great. The extras are a little bare-bones, with only a 30-minute "conversation with the actors/director" and commentary track in addition to the movie; it would be nice to see a fully-loaded edition somewhere further down the line. That's a minor quibble, though, and if you remember "Trainspotting" fondly, this one is well worth picking up, throwing in the Blu-Ray player, and catching up with the lovable scumbags.

MortensOrchid
4.0 out of 5 stars Choose life again
Reviewed in the United States on October 15, 2017
Verified Purchase
If you are of a certain age (i.e. The Gen Xer set), inside and outside of the UK, you were in eager anticipation of this movie as the first was one of the defining moments of the 90s. The Grunge Years were over in the US, but the pendulum swung over across the pond. For us in the US, there was a movie called Singles that fell into the slush pile featuring all of these garage bands from Seattle we had never heard of but would eventually (Alice in Chains, Soundgarden, Pearl Jam, Mudhoney, etc.). When Trainspotting happened, the movie and its soundtrack defined the Brit Pop era of the 90s in the UK. For us in the US it was Nirvana and Pearl Jam; for the UK it was Blur and Oasis. Everything was so exciting and we were at the pinnacle of nightlife and the boom of the 90s. This exciting time of the Grunge Years would end in the US with Kurt Cobain's death, in the UK it ended with Princess Diana's death. And this movie was the bridge that kept the US and the UK connected.

Trainspotting 2, however, does not deliver as a great moment for a variety of reasons. We're all older and more mature, our lives and circumstances have changed quite a bit. Like the characters in the movie (which if you have read the books, please keep in mind these characters have been softened up quite a bit to make them into likeable people, which they were anything but in the books), the four main characters - Mark Renton, Sick Boy, Spud and Begbie, are all different people now, like the audience most excited about it. Mark has returned to the UK after twenty years living away in Amsterdam managing a gym to his hometown of Edinburgh, Scotland after running off with the money from their drug deal, a failed marriage and a heart attack scare. His old friends are still there. Begbie is in prison, Sick Boy manages a bar and runs his shady sex/drug scams, and Spud is still deep in the addiction after his own failed relationships. He, Spud and Sick Boy mend their fences, Begbie escapes from prison and reunites with his estranged wife and son. Mark and Sick Boy join forces once again in crime, inevitably Begbie and Mark cross paths again by accident in the bathroom of a nightclub, and a chase ensues. Many things are reenactments of the defining scenes in the first movie (Mark being chased down the street and bumping into a car to laugh at it, for example).

The end? I will not reveal the spoiler ending, but it's a bit on the anti-climactic side. This movie was a blending of the first Trainspotting book and the sequel, Porno. What does it tell us? What I said before: We're older, wiser and just as screwed up as we were before. Middle aged angst is just like it was in our twenties, but we're wiser and have calmed down quite a bit. Can we go home again? Can we relive those glory days still? The answer is no. Because you change, the people around you change, the places you go to for entertainments change. The things that are important to you when you're twenty are not the same things that are important to you when you're forty. It's good to have closure.

Amazon Customer
5.0 out of 5 stars Excellent 20 year sequel
Reviewed in the United States on December 21, 2017
Verified Purchase
Excellent 20 year sequel. Still smart, dark and funny as hell! AND WHEN THE BATTLE WAS OVER, THERE WERE NO MORE CATHOLICS LEFT! Choose life, choose dvd over blue ray, choose cheese, choose scottish chicks in the club with no knickers on, choose to grow old and still get laid, choose to drink yourself to death because you cant stand being alone every night for 20 years, choose ham sandwiches on christmas, choose lutefisk, choose life Veronica!
Read more
6 people found this helpful
Helpful
Comment Report abuse

Chase Green
2.0 out of 5 stars Eh
Reviewed in the United States on September 20, 2018
Verified Purchase
The case they sent me was completely destroyed which cost a star in my review. As far as the movie goes....pretty disappointing. If I wasn't such a fan of the first one I would've completely hated T2. It was boring and nothing really happened. If you liked the first one I would say it's worth checking out. They included all original characters which was cool. A few callback moments. Decent but not anywhere near as good as I expected.
Read more
One person found this helpful
Helpful
Comment Report abuse

Jonathan Palma
4.0 out of 5 stars Good movie, but an unnecessary one
Reviewed in the United States on November 22, 2019
Verified Purchase
If you thoroughly enjoyed the first one, just leave it at that and kind of pretend this is a different movie. For me personally it was enjoyable to see where the characters went XX years later, but did not serve any other enjoyable purpose than that.
Read more
Helpful
Comment Report abuse
See all reviews from the United States

Amazon Customer
5.0 out of 5 stars Worth watching.
Reviewed in Canada on February 8, 2020
Verified Purchase
For "Trainspotting" fans, it's such a hard act to follow, so T2 may seem to lack, but I enjoyed it, and will watch it again.
Read more
Helpful
Sending feedback...
Thank you for your feedback.
Sorry, we failed to record your vote. Please try again
Report abuse