You've subscribed to A Miller's Creek Novel! We will preorder your items within 24 hours of when they become available. When new books are released, we'll charge your default payment method for the lowest price available during the pre-order period.
Update your device or payment method, cancel individual pre-orders or your subscription at
Your Memberships & Subscriptions
There was an error. We were unable to process your subscription due to an error. Please refresh and try again. 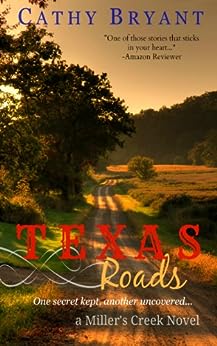 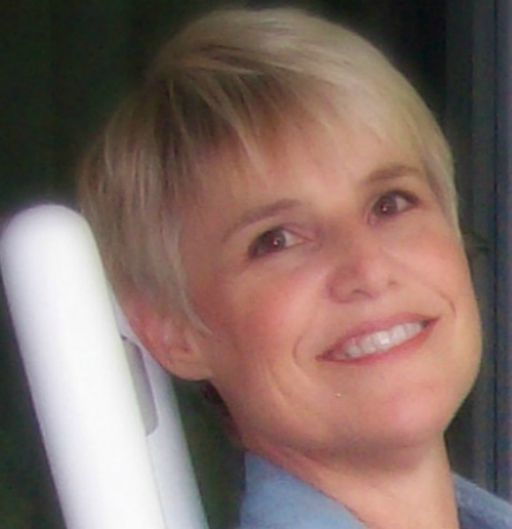 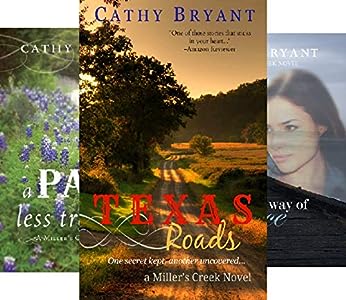 "Texas Roads is one of those books that you love to curl up in your favorite place and read from cover to cover. From the first page, I was caught up in the story." --Donna Morris

I hope readers enjoy Miller's Creek,Texas and feel like they've arrived somewhere vaguely familiar. More than that, I hope TEXAS ROADS sparks a quest for true home.
At home in Him,
Cathy

Cathy is a wife, mother, grandmother, and mini-farmer. A Texas gal by birth and heart, she currently lives in Arkansas near the world's cutest grandkids.
Read more

4.6 out of 5 stars
4.6 out of 5
900 global ratings
How are ratings calculated?
To calculate the overall star rating and percentage breakdown by star, we don’t use a simple average. Instead, our system considers things like how recent a review is and if the reviewer bought the item on Amazon. It also analyzes reviews to verify trustworthiness.
Top reviews

Collector
4.0 out of 5 stars Faith-Filled Small Town Romance
Reviewed in the United States on January 14, 2017
Verified Purchase
A disillusioned billionaire heiress just wants a place to call home. With lovable-but-quirky town folks, quaint country charm, and loads of business potential, Miller's Creek seems like the perfect place to start over. But her dreams of finding home are crushed when malicious rumors and a devastating secret propel her down a road she never expected to travel.

With a sweet, slow developing romance, a hint of mystery, small town flavor and a strong faith element, Texas Roads captured my interest from the first page. Dallas gal, Dani, needs a new direction for her life so heads to small town, Miller's Creek, to spend some time with her aunt. She starts off on the wrong foot with, Steve, when her car runs out of gas shortly before she arrives. He sees her as a big city gal with nothing to offer and she sees him as a rough looking redneck. As they each learn more about one another, they find they have a lot in common and a deep love for small town Miller's Creek. But they both have pasts that play havoc with their current lives.
This book is filled with likeable characters and a wonderful small town flavor that reminded me of Mitford, Cabot Cove (Murder She Wrote), and Mayberry. I loved how Dani's ideas got the town to pull together and put itself back on it's feet.

Bryant's faith thread was the strongest part of the story for me. It is always used in exactly the right places and never feels as though it's dropped in for effect. Dani's faith grew and developed throughout the plot and several of the characters played an important role in this change.

I look forward to continuing this series to see what more happens in the wonderful small town of Miller's Creek. So many great characters that could be the focus of another story. Recommended for readers of contemporary small town Christian fiction.

FAVORITE QUOTES: (So many wonderful gems. Here are just a few.)
""Life's confusion and hard, but running away from God only makes it worse. He'll help you through this if you let Him."

"Everything God made was good. Man's the one who messed it up, and we've been blaming God for it ever since."

"An Atlanta debutante with a Texas cow-poke made about as much sense as a pig in a tutu."
Read more
8 people found this helpful
Helpful
Report abuse

Jbarr5Top Contributor: Baking
TOP 1000 REVIEWER
5.0 out of 5 stars Texas Roads
Reviewed in the United States on October 31, 2017
Verified Purchase
Texas Roads by Cathy Bryant
This book starts out with other offers from the author to get another free book by subscribing to her newsletter.
Starts with Dani, a school teacher and it's the anniversary date of her husband's death. She's financially set just some things you can't buy that are missing.
She's on her way to her aunt's and runs out of gas, starts to rain. She's headed to Miller's Creek.
Steve Miller picks her up as they head to town. He tries to cheer her up as she keeps putting her life down.
She got under his skin and misunderstands he's not so forlorn as his appearance comes across as.
Circumstances bring them together: he's lived at Momma Beth's ranch his whole life. Dani had called her aunt Beth for a ride...
He is also the mayor but likes to help out with physical labor...I can see the firecrackers blaring from here!
Love how the community welcomes her.... He has his secrets and has sworn off all women. She has sworn off all men due to her past life.
God makes his way into the conversation Dani and her aunt are having and she has the right answers to sooth her often quoting from the scriptures.
Like learning about the history of the town and how Steve answers questions about the town and how to improve it as he hopes to get the backers for the money the town needs...
Dani wants a change, she's tired of living in the city and tells Beth of her plans...
Predictable with twists along the way. Medical emergency brings her back to town and the matchmakers get busy...
Love colorful detailed descriptions, would make a great movie
Excerpt from the next book is included. Other works by the author are highlighted at the end.
Lots of drama and mysteries and secrets. Would enjoy reading more from this author.
Read more
7 people found this helpful
Helpful
Report abuse

R. Miller
4.0 out of 5 stars 4.3 stars: Texas Roads by Cathy Bryant
Reviewed in the United States on November 7, 2016
Verified Purchase
A visit to her Aunt Beth introduces Dani to a small town she hopes will be her home, and to Steve, the mayor; but her efforts to help the town inadvertently complicate things.

Plot and Setting: 4.5 -- Plot has unique elements and no major holes, but a few shaky bits. It's a good, thoughtful story, with a mixture of elements that felt very like real life to me, and others that were more about the drama than reality--Dani conveniently having tons of money, for example, and the whole adoption revelation. But even so, the conflicts, actions, and reactions for the most part felt like it could've really happened, which I liked. Setting is clear, believable, and consistent.

Characters: 4 -- Main characters are relatable, realistic, interesting, and dynamic. I liked Steve's passion for his town, and his desire for Dani to know God more than anything else. I admired Dani's desire to help out without taking credit, even when it was hard (though I kept hoping she'd share her secret with at least one other person). Some minor characters have depth, while others may be slightly stereotyped or simplified. Most minor characters have one defining characteristic, and only a few have depth beyond that. Definite strong points in the relationships between characters. The bond between Mama Beth and Steve is especially clear, and the people of Miller's Creek relate to each other in ways that clearly show their long histories together.

Mechanics and Writing: 4 -- A handful of typos, punctuation issues, or word errors, but nothing that seriously hinders understanding. Some compound word issues (like brief case instead of briefcase) and hyphen abuse (two-story is a correct adjective, but two-stories is not), and homophone errors (who's and your instead of whose and you're). Good use of POV (mostly Dani and Steve, with a few bits of Mama Beth and Cecille). Generally skillful writing.

Redeeming Value: 5 -- Well-developed, central, uplifting themes. Dani is driven by a desire to find a home, a place where she belongs; she learns that people and places can disappoint, and the only true and lasting home is found in God. She also learns that secrets, even with good intentions, can be harmful. Steve learns that making assumptions and judgments without actually checking with the person involved is not a good idea. Sex, alcohol, violence, etc, are not glorified at all. No more than a few kisses in the story, but some mentions of Dani's late husband cheating on her and veiled references to Dani being conceived through a rape.

Personal Enjoyment: 4 -- I liked it a lot. Highly enjoyable and very entertaining, with perhaps an issue or two that tempered my pleasure. I’d enjoy reading it again.
Read more
6 people found this helpful
Helpful
Report abuse
See all reviews

Emerald
5.0 out of 5 stars Enjoyed every bit of it
Reviewed in the United Kingdom on May 8, 2019
Verified Purchase
A city woman Dani from Dallas, finds her way to Miller’s creek in search of her aunt she’d never met. Little did she know that her short trip will become Home where she finds answers to her worries and meets Miller Creek’s mayor.
Her life intertwined with the mayor but her misunderstanding of God may be the bridge that keeps them apart as well as her past.

This story was beautifully written. I couldn’t stop reading it and I’ve started on the second book, thanks to previews. I’ll be reading the rest of the series.
Read more
Report abuse

The Devil in the Dust
5.0 out of 5 stars Texas roads
Reviewed in the United Kingdom on October 28, 2017
Verified Purchase
An exceptional book with a story that has many twists and turns which leaves the reader where it is going next. I just kept on reading until it was finished. A very good read
Read more
Report abuse

Amazon Customer
3.0 out of 5 stars Christian story
Reviewed in the United Kingdom on July 17, 2017
Verified Purchase
One of my early indiscriminate kindle purchases July 2013. I didn't realise til now its a Christian story. Religion very strong throughout.
Read more
Report abuse

Kindle Customer
4.0 out of 5 stars Different
Reviewed in the United Kingdom on September 27, 2017
Verified Purchase
Quite a different book not what I was expecting but still worth reading it is well written and an interesting story
Read more
Report abuse

Ay Ak
5.0 out of 5 stars Loved it
Reviewed in the United Kingdom on July 22, 2017
Verified Purchase
When it feels like things are going wrong and there are huge obstacles all around,the only hope one has is truly God and that's what this book portrayed.Enjoyed every minute of it.
Read more
Report abuse
See all reviews