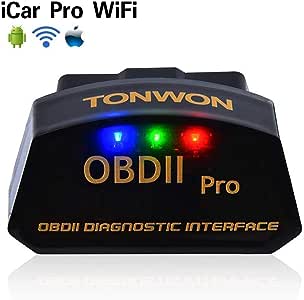 DESCRIPTION:
Tonwon OBDII Pro Wi-Fi read and delete faults from most cars made within the last 20 years.
Fully compatible with all OBD2 protocols and commands.
Compatible with OBD2 / EOBD compliant cars and light trucks ( Petrol car after 2001 and diesel car after 2003/2004 in Europe. DON'T compatible with 24V truck tractors etc).
If you have any question about car OBD2 compatibility ,Please contact us before purchase. We will help you to check it.

When using TONWON Pro Wi-Fi with an excellent OBD2 app. There are still more fun for discover!

3.9 out of 5 stars
3.9 out of 5
92 customer ratings
How does Amazon calculate star ratings?
Amazon calculates a product’s star ratings based on a machine learned model instead of a raw data average. The model takes into account factors including the age of a rating, whether the ratings are from verified purchasers, and factors that establish reviewer trustworthiness.

Stephanie Sullivan
HALL OF FAMETOP 1000 REVIEWERVINE VOICE
5.0 out of 5 stars Helped Turn OFF The Constant Reverse Beep-Beep-Beep In My New Prius
Reviewed in the United States on May 30, 2017
Size: pro WiFi iOS and AndroidVerified Purchase
The WiFi TonWon OBDII Pro performed perfectly for my purpose: Turn off the backup beep-beep-beep in my new Prius Prime in conjunction with the Carista App on my iPhone6. I got the WiFi model because of reported problems between the Bluetooth version and IOS devices.

I have a BlueDriver I used to *GET* information on my old Prius, but that unit would not let me change customization settings needed to handle the backup beep. That's why I got this much less expensive but capable interface.

When I got a new Prius Prime to replace my 10 year old Prius I expected I could turn off the backup beep (in the cabin only) the same way: with a combination of button pushes. But NO! I had to access customizations via the OBDII interface.

I found a bunch of info on the internet and some of it plain wrong. I'll outline the steps to access the customization that worked for me on my Prius Prime. These should work on any gen4 Prius.

PLUG IN THE TONWON ADAPTER
Find the Prius Prime's OBDII connector. It isn't under the dash near the center of the driver's seat like many other Prius I've looked at. It's above the parking brake. Plugging in the TonWon adapter is simple and easy. Mine lit up even before the car was turned on.

INSTALL CARISTA APP
I tried OBD Fusion suggested for this use without luck. I ended up using Carista. The base app is free on the iTunes store and while following the process I needed to make a $9.99 in-app purchase. More on the purchase later... It is also available for Android but not from the Amazon App store.

CONNECT TO TONWON WIFI
The TonWon WiFi adapter has a network name (SSID) of V-LINK. This is an open network (no WiFi key needed). You will need to go into settings on an IOS Device and connect to the adapter.

LAUNCH CARISTA & PREPARE THE CAR
Once WiFi is connected you can launch the Carista app and turn on your car in *accessory* mode. You'll get a screen offering Diagnose, Customize and Service. To change the backup beep setting I used the "Customize" option.

CONNECT CARISTA TO THE TONWON
Carista will ask what kind of adapter and you should select the WiFi ELM327 adapter. Carista will search for the adapter and then download all of vehicle information and settings. This can take a minute or more, so be patient. The progress display was informative.

CHANGING SETTINGS, PART 1
When settings are loaded you'll get 3 more options: Doors/Windows/Remote, Instruments/Display/Dings and Lights. I selected the one with "Dings" :-) and got a screen with a bunch of options. The one I was interested in is "Reverse-gear-beep" which was set to KEEP BEEPING WHILE IN REVERSE. I clicked on this to change it and got the notification I needed to make an in-app purchase which provides a week-long subscription to change any settings I wanted.

IN APP PURCHASE
To process the in-app purchase you'll need to connect to WiFi that has internet access. I got the $9.99 one week subscription. There are choices of many makes, models and years. I just needed the one for my 2017 Prius Prime (and all 2017 Gen 4 Prius). After completing the purchase I reconnected to the TonWon WiFI and repeated the steps to get back to the Reverse-gear-beep setting I wanted to change.

CHANGING SETTING, PART 2
Back at the Reverse-gear-beep setting I tapped on the "KEEP BEEPING WHILE IN REVERSE" which took me to a screen with the 2 available choices. I wanted the other one: BEEP ONCE. I selected BEEP ONCE and then tapped save which took me to the previous screen. I checked to be sure the setting took. To wrap things up power down the car and unplug the TonWon. That's it. It took less 6 minutes including the in-app purchase!

CONCLUSIONS
I like the TonWon Pro WiFi because it's inexpensive and works well with OBD Fusion and the Carista apps. I didn't try the app that comes with the TonWon, so I can't comment on that one. The ELM327 WiFi adapter appears to be a common chip set. This one seems as well made as any of them.

Because with the Carista App it got my job done easily I'm giving the TonWon WiFi OBDII 5 well deserved stars. Well Done.

Hope this helps someone

Andrew Engelkemier
5.0 out of 5 stars a little work, but it does work
Reviewed in the United States on July 19, 2017
Size: pro4.0 iOS and AndroidVerified Purchase
iOS review here, but still may somewhat apply to Android users.
Here's the main annoying thing. It suggested an app called "accurate" with a logo of Vgate, which is free. I got it to connect once, then never again. You can't actually do any diagnostics with that app. It pretty much sucks.
And there's no demo for OBD Fusion. You have to pay 10 bucks for it, then if you can't use it, attempt to return it.

The trick, the default for OBD Fusion is to connect with WiFi. Open the app and change the settings to Bluetooth. That'll help get you connected.

Connection still rather sucks. During diagnostics it tells you to turn your car off or risk damage. I've had OBDII testing done with a standalone device, and you have to turn your car on for it to work, so this seemed dumb, but I followed the instructions. Well a few seconds after turning the car off this thing still has power, but the bluetooth turns off.
Anyway, it works if you keep it running.

So it works, why 3 stars? The experience sucks, and it seems really inconsistent. It's really cheap, so I went with it, and it was listed on the app I hoped to use. But you'll have to fiddle lots with it. So be ready for that. Everything you want to do it tells you you're going to F up your car.

Just know what you're getting into. It feels a lot like using a really cheap android device instead of an iPhone. They both work for their intended purpose, but one of them works a bit smoother for regular use. You can hack the android easier, if that's what you're into. But if you just want it to work easily out of the box, maybe this isn't the device for you.

edit: I had this set to only 3 stars at first, but after comparing it to my friend's "Automatic," which I think is the pinnacle device similar to this one for iOS, he regretted getting that. The Automatic app is a bit prettier, but is still a bit of a pain. And at 120, fine, 110 since you have to buy this app for comparison purposes. 5 stars.
Read more
4 people found this helpful
Helpful
Comment Report abuse

30 Weight
5.0 out of 5 stars Works great on my 2017 Prius to stop reverse beeping
Reviewed in the United States on December 23, 2017
Size: pro WiFi iOS and AndroidVerified Purchase
Many thanks to Stephanie for her very generous and helpful review on shutting off the annoying reverse beeper on her Prius. Worked perfectly for me too but it took a little fiddling. Here are some tips that might clear things up during the process.

1) Realize that the device you’re buying here broadcasts a Wi-Fi signal when you plug it in to your Prius. You will need to go onto your Cell phone, and find Wi-Fi in settings where you will see the tonwon Trying to get on your phone. it’s called “V link” Click OK, launch the app, and turn the car on in accessory mode by hitting the start button once WITHOUT your foot on the brake. Once you are in communication with the device via your phone on the Wifi ELM327 option it offers you options. I chose customize and it loaded the settings from the Prius into my phone. It took 5 mins. It then offers you more options for changes you want to make, I chose Dings and lights”

At this point you have to make the in app purchase and I became confused because what you actually have to do is disconnect your phone connection with the Tonwon and go back into your home or some spot where there is an actual Wi-Fi connection. At that point you complete the transaction with the one week $9.95 option
And go back out to your car and reconnect
and follow Stephanie‘s instructions to change that awful constant reverse beeping to a single beep.
What a relief! The Toyota dealer was going to charge me a full hour to do this job,, $165.
I hate getting screwed and so I’m giving it five stars.
Read more
3 people found this helpful
Helpful
Comment Report abuse
See all reviews from the United States
Pages with related products. See and discover other items: toyota monitor, ford key programmer, check engine code reader, auto check engine light tools, Best wifi for cars, Explore fixds for iphone