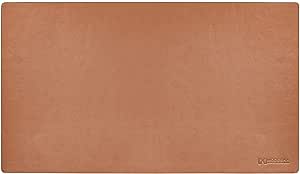 My name is Jeremy Biron and Modeska’s story began in April 2013 when I decided to redesign my office. As I looked around my workspace, I realized that I had a well-designed computer, a sleek laptop stand, the latest ergonomic chair and even great artwork on the walls. All of these new things fit together perfectly with one major exception – the desk accessories.

I designed the Modeska office set to be stylish, durable, and to complement the latest tech products that are in your office and home.

THE MAKING OF A MODESKA SET

4.4 out of 5 stars
4.4 out of 5
321 global ratings
How are ratings calculated?
To calculate the overall star rating and percentage breakdown by star, we don’t use a simple average. Instead, our system considers things like how recent a review is and if the reviewer bought the item on Amazon. It also analyzes reviews to verify trustworthiness.

Chris
3.0 out of 5 stars Too soft for writing
Reviewed in the United States on February 12, 2017
Color: BrownVerified Purchase
This is a good pad if you just want something protective and for your mouse, but if you do a lot of writing then I'm not sure it's a good fit. It was actually for this reason that I returned.

Pros:
- Looks good
- Didn't slide (I only had it out for a few minutes before I decided to return, but I didn't see an issue here)
- Was shipped and arrived flat, and I don't see any issues with it remaining flat.
- Moused tracked with no issues (I have a Mac mouse)

Cons:
- Too soft for writing. You need at least a second sheet of paper underneath the sheet you're writing on, and even that didn't feel comfortable to me. I do a lot of writing, and extrapolate & reconcile info from single-page field notes, and so this just didn't work for me. I subtracted 1 star for this.
- No free return shipping. So this was basically a $6.37 and a trip to the UPS store experiment for me. I'd take another half-star off for this.

Searching for another option to protect my wooden desk.

DoggyDaddy
4.0 out of 5 stars A Rad Pad - Great Product!
Reviewed in the United States on April 21, 2016
Color: GrayVerified Purchase
I have now had the desk pad for several weeks. I was worried about the reviews that talked about the corners 'lifting'. Not a big deal for me. Here are my overall thoughts:

PROS:
-High-quality construction and design
-Great feel to the synthetic leather
-Love the dark gray color, blends-in with everything
-Appreciate the tastefully embossed logo in the bottom right corner of the product, and not the bright white letters some manufacturers use
-A good feel with my mouse
-Perfect size. This is actually a big deal. This fits perfectly in front of my 21" iMac. Just right for my keyboard and mouse with plenty of room.

CONS:
-Slightly lifting corners. I just want to say that this really doesn't bother me that much and I'm an extremely picky buyer. I tried putting heavy books on the corners for 5 days, and it didn't seem to do a lot. With that said, I'm not sure I would have even noticed it if it was't for all the reviews about it. This is the only reason I gave it 4 stars and not 5. And if I could, I would have given it a 4.5 star rating.

Just one comment to the manufacturers. I appreciate that the product is not rolled or folded and is delivered straight and flat. However when my box came from Amazon, the product was lose in a big box. No padding, bubble wrap or cushioning of any kind. So the product knocked around in the box. I was concerned that the edges might have gotten bent, dented and beat up a bit. But to my surprise, it was fine. I'd still look into the shipper putting something around it, just to keep it from getting damaged.

Anyway, after weeks of use, I can say that I highly recommend this product. It looks classy, feels good, and seems very durable to last a long time.
Read more
11 people found this helpful
Helpful
Report abuse

Nick W
5.0 out of 5 stars Once upon a time, there was this idiot that opened his beers on his desk
Reviewed in the United States on December 15, 2019
Color: BrownVerified Purchase
Once upon a time, there was a guy with a beautiful desk where he spent hour after hour, day after day, reading and writing. Studying and thinking. Laughing and crying. At work and at play. His desk was his altar. His desk was his playground. If he could comfortably sleep at his desk, he certainly would.

He was raised well. His parents has nice Ethan Allen furniture ... when that was a thing. He’s not even sure if it was a thing or if it still is. He hasn’t thought of Ethan Allan until now. He did know NEVER EVER to do anything to wood. Preserve and protect.

He was brought up to believe that good humans are like the wood police - protect and defend. He always used coasters (on wood but not glass). Glass is safe. You can do anything to glass except perhaps fracture it with a hammer or a bullet. Windex makes all things new. Which is why he preferred glass until now.

This poor dude didn't know anything about blotters. If he had, he would have known the word blot but would ask blot what? He’d think, Windex will wipe away any marks he might make. Besides, he never ever, ever, went off the page. He never blotted. He was blot free. He simply didn't make marks like that. Of course, his desks had always been glass. He thought sleep, food, and Windex solved the majority of life's blots.

What he didn't know is how much he would come to love his desk. This inanimate object which was once an acacia tree somewhere gave its oxygen-giving life for him to sit at hour upon hour, day after day would become loved. It would become so loved, we can guess more in its death than it was in its life, that he should want to protect and defend it.

He also didn't know that he'd far more than write and read at this desk (its intended purpose). He'd end up eating at his desk and setting down hot dishes on it. He'd end up opening beer bottles on his desk, pressing them into his beloved think space. He’d end up tattooing his beloved with his own idiocy. Somehow, he thought, desks are immune.

He realized how wrong he was when at first he noticed a spiral like shape in the wood. The shape was clearly man-made. He chided himself. He blotted. It was from a beer bottle. He realized how much he loved his desk and took up the mantle to protect and defend wood against harm once again.

He learned first what the hell blotters are and why they are not just needed but completely necessary. He regrets harming his desk as he did. He knew not what he did. But really, he warns desks are not magically immune from whatever you might do to them.

He did some research and wanted genuine leather. He also wanted an American company. He looked at Etsy and Amazon until deciding on the TOP Rated - Modeska 24"x14" Leather Desk Pad - Executive Blotter and Protective Mat - Mouse Pad, It matched the existing leather in his room and didn’t detract from the color of the wood stain.

A week has passed and he is happy that he once again wears the white hat of protector and defender of wood. His habits aren't likely change. He’ll still eat dinner at his desk. He’ll still open beer bottles against it. He'll still want to sleep at it. And he’ll now rest easy that that acacia tree gave its life for a worthy purpose.
Read more
2 people found this helpful
Helpful
Report abuse

Rob Mahan
5.0 out of 5 stars Perfect Pad for My Office Desk
Reviewed in the United States on April 21, 2016
Color: BrownVerified Purchase
My desk pad arrived yesterday, well-packed and flat in a large shipping box. As a result of the packing, the pad lies quite flat, right out of the box. The size works well with my small desk, one of the reasons I picked this pad, and the synthetic leather grain and color complements the wood grain and other colors in my office beautifully. The small, embossed logo in the lower right corner of the pad is tasteful, and hardly noticeable. The surface of the pad is firm, and will be comfortable to work on. I'm quite pleased with my new desk pad. BTW, I purchased this product and I have no relationship to Modeska.
Read more