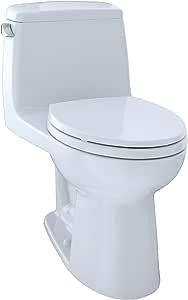 This sleek, elongated one-piece design features our SanaGloss ion barrier (see Smartfact below) and our industry-leading G-Max flushing system, which draws water into the bowl more quickly, and out more forcefully.

4.0 out of 5 stars
4 out of 5
83 global ratings
How are ratings calculated?
To calculate the overall star rating and percentage breakdown by star, we don’t use a simple average. Instead, our system considers things like how recent a review is and if the reviewer bought the item on Amazon. It also analyzes reviews to verify trustworthiness.

Mister Crash
3.0 out of 5 stars 5-star exterior, 1-start parts
Reviewed in the United States on June 24, 2018
Style: TraditionalColor: Cotton WhiteVerified Purchase
Note: this review is based on four years of experience with these toilets.

When it came time to replace our existing toilets, I did a lot of research. I wanted something with an elongated bowl, a quiet but powerful flush, nice aesthetics, and an expectation of reliability. From what I read, the Toto Ultramax checked all the boxes. I bought three of these, and had a plumber replace all of our existing toilets.

With our previous toilets, I was afraid to flush them in the middle of the night because the flush was so loud I expected it to wake my light-sleeping children. No such issues with the Ultramax. The flush is a reasonable volume, and it clogs far less than our previous toilets.

The seat height is slightly lower than other toilets, but I find that to be an advantage. It also made it easier for my children to use. The soft-close seat is very welcome as well.

All was well for about two years. And then the problems started.

It began by being woken up in the middle of the night by a horrible loud screeching sound emanating from one of our toilets. I flushed it, and the sound stopped, only to return a few days later. Within three months, all three of the toilets were doing the same thing. Hardly a day went by when at least one of them didn't wail like a banshee.

In researching the issue, I found that the fill valves were the culprit. Apparently, the stock fill valves that Toto provides have a design flaw which can cause this issue. I replaced all of them with Korky fill valves, which resolved the problem.

About three months later, I noticed that the toilets were running between flushes sometimes. I traced this to worn out flappers, and replaced them all with the recommended Korky flappers. Interestingly, all three replacement flappers I got were missing a plastic disc that was needed for this toilet model, so I had to contact Korky to get an additional set of replacements.

This worked for about a year. Then the running water problems got worse. Far worse. I would come home and find one of the toilets running, realizing that it had likely been running for hours. When I had plumbers in for other jobs, they would confirm leaks, but not have a suggestion for what could be causing it. My water bill was almost $100 a month, most of which was coming from the toilets. All three of them were exhibiting the same problem. I was seriously considering replacing them all again.

As a last resort, I replaced the flapper style flush valves with Toto's newer tower style valves. Instead of rotating on the flush and falling back to approximately the same location, it moves vertically along a rail and falls back to the exact same position. This is a much better design, and after replacing all of the flush valves, my running water issues have been resolved. However, I'm still wary that other issues may be just around the corner.

So, there you have it. Great exterior design combined with wonky interior parts. If Toto had included the Korky fill valve and the redesigned flush valve from the start, I would probably be giving this 5 stars. It's possible that they have replaced the stock flappers since I got my toilets, but I can't confirm or deny this.

Beegowl
4.0 out of 5 stars Some tradeoffs for never having to worry about clogged toilet.
Reviewed in the United States on August 9, 2013
Style: TraditionalColor: Cotton WhiteVerified Purchase
I purchased two of these commodes as replacements because I was not happy with the cheap ones in my 30 year old house. The reviews were positive about this one piece low flow toilet regarding its ability to flush material. My old toilet clogged about every 5 uses and it was driving me crazy. I've lived with this style for two years now and it has never clogged or flushed slowly. Problem solved. I'm also happy with the lid which is damped so no slamming toilet seats. Now for the tradeoffs. The design of the toilet seat was not well thought out. It's not easy to clean. I can't just use my cleaning towel and swipe it off. The design of the lid is such that I must take an edge of the cloth and run it into a channel to get dust and dirt on the rear of the seat. The seat sits on the commode top in a way that makes it difficult to get under the back of the lid to clean. If you're not in a hurry to clean, this is not a big problem. I'm not especially fond of spending large blocks of time cleaning, so for me it's quite irritating. The real tradeoff is bowl scouring. The low flow design, which as I say has never clogged, does not scour the bowl when flushed. So, bathroom time is extended to allow for using your bowl brush and cleanser to scrub the bowl with each use. I've learned that I'm better off doing it each time while it's easy instead of putting it off for a couple of days when it becomes much more difficult to get the bowl clean. So five stars for no worries about clogging with a one star deduct for cleaning issues.
Read more
19 people found this helpful
Helpful
Comment Report abuse

Talitaria
5.0 out of 5 stars Powerful.
Reviewed in the United States on June 26, 2017
Style: TraditionalColor: Cotton WhiteVerified Purchase
I bought this to replace a perpetually moldy and impossible-to-clean toilet whose flush was very close to useless. Toto has made my dreams come true. This toilet indeed will flush what it is challenged with, sure as Kilimanjaro rises like Olympus above the Serengeti. The only down side is that the seat is rather cheap and flimsy, taking you for a little ride when you sit down...that's only likely to get worse. I'm also not a huge fan of the velcro-on tank lid, but these minor inconveniences are nothing compared to its power and one-piece design (eliminating the extremely annoying, perpetually dirty space between the tank and the bowl). Definitely worth the small fortune. I also have to give a shout out to the company's customer service. I was very wary of having a 100-lb toilet shipped to my door, and sure enough the first one showed up in pieces. However, SUPPLYdotcom was fast and efficient, and they sent me a new one by a different shipping method, which worked out well.
Read more
5 people found this helpful
Helpful
Comment Report abuse

Captain Curtis H. Briggs
4.0 out of 5 stars Four Stars
Reviewed in the United States on October 17, 2016
Style: TraditionalColor: Cotton WhiteVerified Purchase
Still clogs but not as bad as an expensive Koller, plunger doesn't seal well in oblong outlet. Just clogged again, used flange type plunger and it wouldn't clear the clog, used hot water and detergent and still wouldn't unclog so had to resort to the dreaded snake and that did it immediately. To be fair, a family member is on pain medication and that clogs the G.I. tract which this toilet can't handle. Under normal conditions, it works fine. The elongated flush opening does not work with standard flange plungers. Amazon doesn't seem to have plungers that would fit and seal the elongated opening.
Read more
4 people found this helpful
Helpful
Comment Report abuse

J. Tsai
5.0 out of 5 stars Great toilet, bad shipping
Reviewed in the United States on November 27, 2018
Style: TraditionalColor: Cotton WhiteVerified Purchase
Bought a new house and the builders used really crappy toilets (pun intended). It doesn't help that I have a 2 year old that likes to throw things in the toilet. So after a couple months of plunging toilets every day, I got tired of it. I did some research and these are some of the best toilets you can get. I wanted a 1 piece for ease of cleaning, along with something with really good flushing capabilities. I replaced all of them and they work fantastic. I've had them for several months now.

The only issue was that out of the 4 that I ordered, 3 were broken due to rough shipping. Had to get them picked up and Amazon took awhile to credit the return. I ended up using one from Amazon and getting the other 3 at a local HD.
Read more
Helpful
Comment Report abuse
See all reviews

Page 1 of 1 Start overPage 1 of 1
This shopping feature will continue to load items when the Enter key is pressed. In order to navigate out of this carousel please use your heading shortcut key to navigate to the next or previous heading.
Back
Next
Pages with related products. See and discover other items: elongated toilet, elongated toilets, toto parts, Best Rated in Toilets, Best Rated in One-Piece Toilets, high bowl height toilets