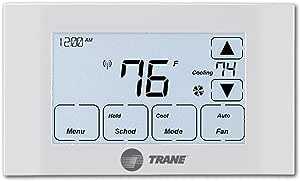 by Trane
4.0 out of 5 stars 102 ratings
Amazon's Choice recommends highly rated and well-priced products.
Amazon's Choice for "zwave thermostat"
Available at a lower price from other sellers that may not offer free Prime shipping.

Trane XR524 Z-Wave Thermostat. Z-Wave certified for use with all leading home automation systems such as Nexia and American Standard Air Home.

4.0 out of 5 stars
4 out of 5
102 customer ratings
How does Amazon calculate star ratings?
Amazon calculates a product’s star ratings based on a machine learned model instead of a raw data average. The model takes into account factors including the age of a rating, whether the ratings are from verified purchasers, and factors that establish reviewer trustworthiness.

Installation was a snap: Locate studs and wires in wall, drill, drive screws, then snip, strip, and screw down the wires. As long as you wrote down the old locations or can physically verify their purpose, it's that easy.

Programming took a minute, mostly because I had to go verify the type of a/c heating system I had, but was pretty simple. Instructions could have been clearer or more complete (some options are just about undocumented), but I guess that's because they don't expect homeowners to be adjusting them.

Setting the schedule was a breeze, and while it could be nice to have one or two more set points throughout the day (there are 4: wake, day, eve, night), it's sufficient for my purposes. After setting Monday and Saturday, copying to the rest of the week took just a couple seconds.

Swing (I guess that's what it is) seems pretty wide by default. After reaching a set temperature, the A/C remains off for a while (even if the temperature goes outside the set range by a degree--seems like it wont kick back on unless it goes two degrees past the setting). Not a big deal, may want to adjust your normal settings to compensate.

The circulate fan mode (which automatically cycles the fan on and off for a set period) seemed to work at first, but after programming the schedule and setting the mode to auto (rather than heat or cool), it doesn't seem to run other than when the a/c or heat is on (which can be quite a long interval if the outdoor temperature is moderate and you have good insulation). I'm not sure if that's a feature or a bug, but I would appreciate it if it would run the fan when the a/c and heat have been off for a while (maybe a configurable period from 30m to 24h).

zwave paired with my nortek usb zwave controller quickly, and works well with homeassistant for reporting and controlling the temperature and fan settings remotely (though there are four seemingly redundant nodes). Setting up automation and scripting is tedious, but I think that is more to do with homeassistant than this thermostat. Sending commands works (it puts the thermostat in "temporary override" mode), just need to figure out how to format the configuration of homeassistant. Temperature (target, min, and max), fan (and fan speed if your system supports it), and away mode (schedule, away, vacation) are all reported and configurable via zwave. There are alao some other undocumented options, but I haven't figured out what they do yet.

Joey W.
5.0 out of 5 stars Works well with Smartthings
Reviewed in the United States on October 1, 2017
Verified Purchase
I was skeptical about the fuss of a smart thermostat but decided to give it a try and now I won't go back! I installed this to my heat pump and AC unit wires and it works great. It easily joined my zwave network on my Samsung smartthings hub. I am able to set temp, fan mode, and do scheduling all from the smartthings app. I can also set arrival schedules using my phone as sensor to arrive to a comfortable temp. Even when I'm away and not on my local wifi lan switching temp or fan mode is instantaneous as I'm told by someone at the home. One other thing, this unit does respond well to Alexa through the smartthings skill from the Alexa app.
Read more

H. E. Warner
4.0 out of 5 stars Thermostat isn’t displayed correctly in Alex’s app if you use controller and clock gains time
Reviewed in the United States on December 25, 2018
Verified Purchase
Alexa has numbers or Heat To / Cool To headers reversed when displaying in Alex’s app. The reading show correctly in my HomeSeer HS3TOUCH app on my iPhone. Will change review when this is corrected.

Like many others replacing older thermostat I had to connect the spare wire in my wiring bundle at the furnace and the new thermostat to the C terminal. After the thermostat is in service for a few days I will still need to adjust the Current Temp as covered in the documentation. The documentation provided is very small print, recommend just searching for manual online, it is much easier to read. I like the large bright display that dims and is still very easy to see.

If you are using HomeSeer skill in Alexa you will find that the Heat To and Cool To titles are reversed and the Current Temp is displayed in Celsius regardless of thermostat settings in the Alexa display.

Controlled by HomeSeer controller but thermostat clock gains time and has to be rescanned to correct time. The rescan creates a child field that needs to be deleted each time you rescan.

It displays correctly with my HS3TOUCH app and I am pleased with the thermostat.
Read more
3 people found this helpful
Helpful
Comment Report abuse

Nim
5.0 out of 5 stars Great Compatible Thermostat
Reviewed in the United States on October 26, 2015
Verified Purchase
Works as advertised. Tied this device into my 24volt gas forced air furnace made by Carrier. My old thermostat had batteries, so I had to use the spare wire to connect the common at the furnace with the common at the thermostat in order for the thermostat to receive power. Works great with my Nexia system (one $9.99 fee covers all connected devices). Programming is easy through a web page once connected to the Z-Wave network. When away, I can hold temp and then resume programming from my smart phone as I approach home so that I can arrive to a cool/warm house as desired. I can also have alerts sent if certain threshold temperatures are met in the event my furnace fails.
Read more
16 people found this helpful
Helpful
Comment Report abuse

Dan
4.0 out of 5 stars Dud out of the box
Reviewed in the United States on February 18, 2018
Verified Purchase
I have replaced a few smart thermostats with no problems. With the purchase of an older home, I thought no problem. I installed this one, and nothing. The screen was blank. I had taken a picture of the old thermostat wiring, and re-confirmed the 4 wires matched up exactly. The did, nothing. So, I switched back and the older themostate worked perfectly. So, I read hte manual and tried again. Still, blank screen. After all this, I wrote a bad review that I got a dud.

Not being one to quit, I started searching the internet, and finally, I realized that these new smart thermostats need a C-wire. I tried to use a jump wire with my 4 wire installation, in one of my failed attempts. Luckily, hidden behind the wall of my 18 gauge wire bundle, I found the 5th wire. It wasn't connected to the air handler, so I had to take the air handler apart and connect the 5th wire to the C terminal, then I did the say to the thermostat. After turning the power back on, it all worked perfectly.

So, good product so far with easy connection via zwave, but I wish the manual would have discussed the need for a c-wire.
Read more
5 people found this helpful
Helpful
Comment Report abuse
See all reviews from the United States

Page 1 of 1 Start overPage 1 of 1
This shopping feature will continue to load items when the Enter key is pressed. In order to navigate out of this carousel please use your heading shortcut key to navigate to the next or previous heading.
Back
Next
Pages with related products. See and discover other items: home energy monitor, home temperature thermostat, smart thermostat, thermostat control, Best Rated in Home Programmable Thermostats, Best Rated in Home Thermostats & Accessories