TRILINGUAL BOOK RUSSIAN – ENGLISH - SPANISH THE DEATH OF... and millions of other books are available for Amazon Kindle. Learn more 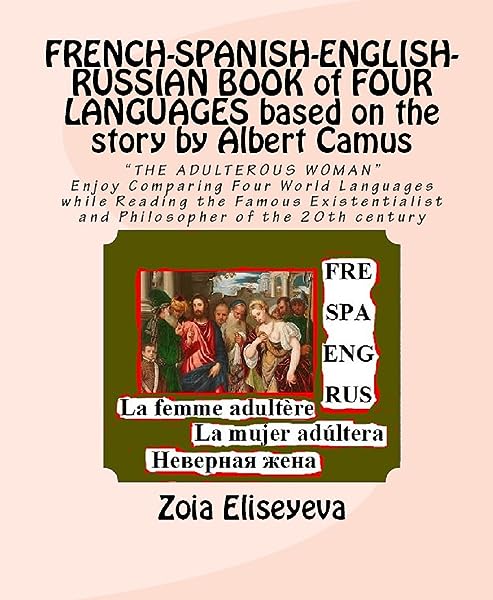 by Zoia Eliseyeva (Author)
4.5 out of 5 stars 2 ratings
Book 2 of 2: Trilingual Books by Zoia Eliseyeva
See all formats and editions
Sorry, there was a problem loading this page. Try again.

This is a complete text trilingual version of the Leo Tolstoy's famous psychological novel: Russian-English-Spanish. It opens as three paragraphs of the three presented languages on one page. In an electronic format it will run with the paragraphs separated by single, and pages by double lines. The book is a deeply psychological story by a literary genius of Tolstoy. It can be read in any combination of these three world languages. The book can be used by students, professors, or anyone who wants to enjoy the three presented languages. The trilingual text is supplied by the author's translation of notes from the original 33-year-old Russian edition (Russian to English), as well as with the comments on some of Tolstoy's vocabulary, and its reflection in the presented translations. Zoia Eliseyeva is a trilingual educator, Russian native speaker in the USA. She has Master's degree in Education and many publications since 1997: Russian and multilingual.

Zoia Eliseyeva (other last names, by marriages, Burkhart/Sproesser) is a native Russian, born in Soviet Union. She got a Bachelor’s degree in English and Literature from Latvia State University in 1989, and a Master’s degree in Education from California State University in San Bernardino in 2002. Zoia is an author of an autobiographical-immigrant book, the chapters of which first were published in Russia and in USA back in 1996. Since then Zoia has studied Spanish and published over 17 books (English-Russian-Spanish-French) on Amazon-Kindle, as well as she created two educational UTube Channels “zoiacalifornia” and “Tutoring Languages Services ESL, Russian, Spanish”. Zoia has been providing professional language services in California, USA, as a teacher of languages, and a translator. Her profile can be found on all public sites. Being an optimist who walks through life with a smile, Zoia has been appreciated by her students of Russian, English, and Spanish languages in Riga, Latvia, in California, USA, and in Oaxaca, Mexico.
Start reading TRILINGUAL BOOK RUSSIAN – ENGLISH - SPANISH THE DEATH OF... on your Kindle in under a minute.

Amazon Customer
4.0 out of 5 stars Great
Reviewed in the United States on July 25, 2017
Great Tolstoy short story! intermingled languages make it a bit of a rough read. It's hard to keep up with the English passages because they're dispersed in-between the other languages.
Read more
One person found this helpful
Helpful
Report abuse
See all reviews
Pages with related products. See and discover other items: russian to english dictionary, tolstoy books
Back to top
Get to Know Us
Make Money with Us
Amazon Payment Products
Let Us Help You
EnglishChoose a language for shopping. United StatesChoose a country/region for shopping.
© 1996-2021, Amazon.com, Inc. or its affiliates