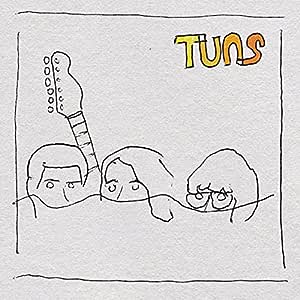 Tuns (Artist) Format: Audio CD
4.6 out of 5 stars 11 ratings
See all 4 formats and editions Hide other formats and editions
Includes FREE MP3 version of this album.&nbspProvided by Amazon Digital Services LLC. Terms and Conditions. Does not apply to gift orders.&nbspComplete your purchase to save the MP3 version to your music library.
Available at a lower price from other sellers that may not offer free Prime shipping.

You know your new band is destined for greatness when your very first live show is on stage at Toronto's fabled Massey Hall. ''I remember telling people that we were playing at Massey Hall,'' recalls Mike O'Neill, one-third of TUNS, and they'd say, ''Oh, well everything after that is going to be downhill, eh?'' Hardly. Not when you have a band comprised of Chris Murphy of Sloan, Matt Murphy (no relation) of Super Friendz and Flashing Lights, and Mike O'Neill of the Inbreds, three men who were central to what was known in the 1990s as the Halifax Pop Explosion. That Massey Hall gig in October 2015, part of an all-star benefit show organized by Hayden, marked the first time anyone knew TUNS existed. The band's internal mutual appreciation dates back 20 years to when the Inbreds and Super Friendz- with whom Chris was playing drums during a Sloan hiatus- toured together, a friendship only now coming to musical fruition. Now, with their first full-length, TUNS is proving that they're not going to be that super group that sounds great on paper and super lame on your speakers. They're not a bunch of old dudes past their peak who want to play half-tempo dirges about their divorce. This is not some side project where Chris dumps his Sloan leftovers. Far, far from it. TUNS is an exciting new band of equals, of colaborators, of experienced veterans who sound as exuberant as ever. It's power pop with intricate melodies, electrifying rock'n'roll written with a deep appreciation for songcraft. It's like a music geek's version of fantasy baseball, a band that could feature Paul McCartney, Pete Townshend and the Attractions' Pete Thomas, with Alex Chilton and The Jam's Paul Weler throwing in song ideas.

''TUNS is a trio of eternally boyish and Beatlesque voices veritably born to sing and play together.'' --The Toronto Star