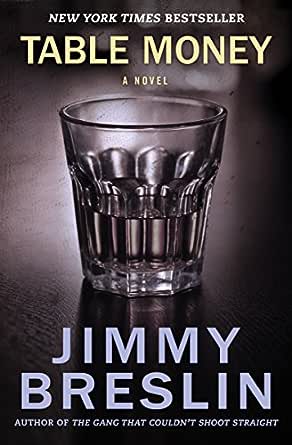 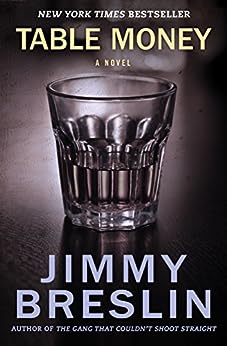 “What we never expected from Jimmy Breslin is what we have here—a serious literary novel, a superior work of fiction.” —The New York Times
“Table Money is a heavyweight saga in an era of welterweights, a big fat book that's bone-hard all the way through.” —Los Angeles Times
“This is a serious book that is frequently very funny, filled with Breslin’s trademark hilarious dialogue and his usual supporting cast of zany eccentrics. Easily Breslin’s best novel.” —Library Journal

Jimmy Breslin (1928–2017) was a Pulitzer Prize–winning journalist and one of most prominent columnists in the United States. Born in Queens, New York, Breslin started working in New York City newsrooms in the 1940s. He began as a columnist in 1963, when he won national attention by covering John F. Kennedy’s assassination from the emergency room in the Dallas Hospital and, later, from the point of view of the President’s gravedigger at Arlington Cemetery. He ran for citywide office on a secessionist platform, befriended and was beaten up by mobsters, and received letters from the Son of Sam during the serial killer’s infamous 1977 spree. Known as one of the best-informed journalists in the city, Breslin’s years of insightful reporting won him a Pulitzer in 1986, awarded for “columns which consistently champion ordinary citizens.” Although he stopped writing his weekly column for Newsday in 2004, Breslin continued to write books, having produced nearly two dozen in his lifetime. He passed away in 2017 at the age of eighty-eight.

In Vietnam, Owney Morrison was a hero, winner of the Medal of Honor. Back home in Queens, married and father of a baby daughter, Owney is following family tradition and working as a tunnel builder. He is also following the family tradition of heavy drinking, and he is losing the battle of the bottle. Desperate, his wife Dolores leaves him, determined to make her life more meaningful than the lot usually decreed for Queens housewives. This is more than simply another novel of marital problems. By focusing on the Morrisons and their extended families, their friends and neighbors, Breslin dramatizes the changing relationships of men and women, parents and children, in contemporary America. This is a serious book that is frequently very funny, filled with Breslin's trademark hilarious dialogue and his usual supporting cast of zany eccentrics. Easily Breslin's best novel. Literary Guild dual main selection. Charles Michaud, Turner Free Lib., Randolph, Mass.
Copyright 1986 Reed Business Information, Inc. --This text refers to an alternate kindle_edition edition.
Read more

Cdr. J. A. Copes USN, ret.
5.0 out of 5 stars Great story about how alcoholism destroys EVERYTHING
Reviewed in the United States on October 19, 2020
Verified Purchase
Easy but gripping read.
Read more
One person found this helpful
Helpful
Report abuse

William J. Monahan
5.0 out of 5 stars Breslin at his best.
Reviewed in the United States on December 23, 2012
Verified Purchase
He clearly knew these guys via many upchuck hangovers. I heardly remember reading any of his stuff that isn't his first hand experiences. Folks west of the Hudson may put it down as allegorical.
Read more
One person found this helpful
Helpful
Report abuse

A. Hogan
VINE VOICE
5.0 out of 5 stars Superb Breslin
Reviewed in the United States on October 10, 2001
Jimmy Breslin is one of those writers with whom people invaiably get their politics intertwined. A staple in NYC for 4 decades, his columns have stuck a burr in the saddle of the powerful for many years{and Jimmy lets you know that, too, which contributes to his persona}In table money, he looks , in microcosm at the irish immigrant expierence in America through one family, at the horrific cost of alcoholism, and at one truly heroic woman. There are no easy, quick fixes in this novel. Owens decent into alcohol is not pleasant ,the descriptions of the sandhogs{tunnel diggers} is brilliant, and lower middle class life in Queens was absoltuely dead on. I think in many ways this book was a homage to Breslins late wife, who put up with his alcoholism for many years{his eulogy was one of the more moving things I have read in my life}. I believe firmly that Breslin is one of the simply great writers of our time, after you get pst the Damon Runyon bit, and trully, almsot spectacularly underrated because of his politics. An excellent, moving novel, though since it touches on so many things that are persoanl with me, I can indentify very strongly with the characters. Anyway, an excellent, superbly written novel for an american original.
Read more
9 people found this helpful
Helpful
Report abuse

James Hercules Sutton
3.0 out of 5 stars It isn't a bad book,
Reviewed in the United States on June 4, 2004
but it isn't his best either, because it takes a hundred pages of anecdotes to get going & then nothing dramatic happens until p. 186. Unlike his other books, Breslin uses little dialogue and leans heavily on narrative, as if trying to put down everything he knows. He knows a great deal, about New York, about the Irish in New York, about why New York is New York. He doesn't much like what New York has become. The best of his book is how he makes a woman's struggle to control her destiny seem real. Maybe it was necessary for him to put this into historical context, but his story might have had more impact if he had omitted some of the history of one Irish family. Maybe he needed to warm up, He spent a long time on the book--"ten years to write," says the dust jacket. What we have here is a writer trying to straighten himself out as he learns his art. Worth reading as another illustratation of Oscar Wilde's saw, "The Irish are wonderful, except, of course, to each other." The whole history of Ireland lurks in that epithet & in everything Breslin writes.
Read more
4 people found this helpful
Helpful
Report abuse

Joe Bruno
1.0 out of 5 stars "Table Money "a waste of time and money
Reviewed in the United States on February 20, 2001
OK I tried. I really tried to read Jimmy Breslin's 1985 novel ÒTable Money.Ó It was recommended by a writer I respect, and although I disagree strongly with Breslin's politics, his novels are usually amusing and quite funny. That is the ones pre-1985, which are the only ones I had read anyway up until ÒTable MoneyÓ infiltrated my life.
I made it through 80 excruciating pages before realized reading any further reading could only be classified as "cruel and unusual punishment."
The novel starts by Breslin relating the entire family tree of the main character Owney Morrison, from 1865 to 1972, when Morrison returns from the Vietnam War. In fact, Owney himself doesnÕt make an appearance until page 32.
The one thing Morrison and his family have in common is that they are all uninteresting louts, with no class and more than a passing fondness for a bottle of booze. Breslin blasts his readers with every Irish-drunken-bum clique in sight, which frankly makes me more than a little annoyed since, as a lifetime NY City denizen just as Breslin is, I know many more Irish people who donÕt drink at all, rather than those who spend all their waking hours at the business end of a bottle.
To further contaminate things, Breslin develops no plot of substance, nor is their any reason to root for Owney Morrison and his troubled brood. After 80 pages, I came to the realization that ÒTable MoneyÓ belongs under the table, or more properly in the garbage can.
Like an old baseball player who canÕt hit the fastball anymore, Breslin has seemed to have regressed into a caricature of his former talented self. Or maybe that was a mirage too.
I have no design of reading any more of Jimmy BreslinÕs pap in the future. Nor in the past for that matter, from 1985 on.
If you have intentions to spend a few rubles on buying ÒTable Money,Ó spend it on something much more jovial. Like ÒWar and PeaceÓ for example.