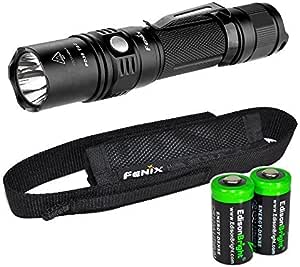 The PD35 TAC (Tactical Edition) remains a pocket size but has a higher performance and focuses on tactcial employment. Measured at less than 5.51 inches, it features up to a 1000-lumen output and has a beam distance of up to 656 feet. In the Outdoor Mode, the PD35 TAC delivers 6 output modes. However, the Tactical Mode strengthens the PD35 TAC with simplified and fast operation. From outdoor use to law enforcement, you can resort to it.

Switching between Tactical/Outdoor modes: Press and hold side button for 3 seconds.

4.5 out of 5 stars
4.5 out of 5
1,097 global ratings
How are ratings calculated?
To calculate the overall star rating and percentage breakdown by star, we don’t use a simple average. Instead, our system considers things like how recent a review is and if the reviewer bought the item on Amazon. It also analyzes reviews to verify trustworthiness.

K. R. Kerry
1.0 out of 5 stars Edison Bright is a SHAM
Reviewed in the United States on January 3, 2019
Verified Purchase
The Fenix PD35 is a fine flashlight and virtually all of the reviews are positive. I would give the flashlight 5 stars. This post is about Edison Bright. One of the two flashlights I bought failed after 2 years. The warranty is good for 5 years in my case. I contacted the Fenix warranty office in Broken Arrow, OK and they told me that they do not warrant Edison Bright sold items since Edison Bright has its own warranty system. That is interesting because Edison Bright HAS NO WARRANTY SYSTEM. You cannot even find a description of their warranty process nor any way to contact them. They sell a very good product but they are simply a sham seller with no guarantees. If you google "Edison Bright Warranty" you will find other similar complaints. Buy the Fenix products, but DO NOT BUY FROM EDISON BRIGHT.
Read more
32 people found this helpful
Helpful
Report abuse

Jeremy
3.0 out of 5 stars Fantastically bright light! Well built and VERY bright!
Reviewed in the United States on January 7, 2017
Verified Purchase
I have a ton of different flashlights due to working a lot of different night jobs. This little light is very well built! The fact that they had the foresight to send it with a spare switch cover and replacement o-rings is a very nice extra I wasn't expecting in the box! The strobe mode is very bright and I really like that it changes times between pulses! That would work very well to disorient a would be attacker / criminal. It doesn't FEEL as sturdy as my Streamlight, but it does NOT feel cheap like some of the other over-rated lights I have bought on Amazon that had good reviews.

Pros-
Works with my current 18650 batteries
Small, I carry it in my pocket every day, no problem
BRIGHT! This thing is CRAZY bright for how small it is!
The ability to change brightness level, very quickly without having to hit the power button is very nice!

Cons-
The button to change between mods is a little hard to find. I leave the clip pointed at it to find it easier. Would be nice if it were a little more pronounced. But, that would probably take away from the lights streamlined design
Not exactly thrilled with the wrist strap it came with. But, I can get a better one that is adjustable. No big deal.

Update #1 - 03-31-17
I have had this light about 4 months now. I use it, pretty much daily. I don't generally use it for extended amounts of time, but I have only had to charge the LG 18650 battery I use in it twice so far. I ended up not even trying the batteries it came with. I also took off the wrist strap, because it just felt like it was going to break. I don't trust the carrying case that it comes with either. Also felt very cheap. The light itself has been rock solid so far. I do with that the DIM setting were dimmer. Also, the top two brightness settings are very difficult to tell between unless the battery is FULLY charged. Still a very good light though. It has given me no issues other than when my friends use it and blind the crap out of me by accident with it.

Update 2: 06-30-2017
Light is still going strong with daily use. I have started to notice that the button to choose between modes is going wonky. Well, it might not be the button? I go to select different levels of brightness, sometimes it only gives me 3 different ones, or it gets stuck on a mode. At first I thought maybe it was because the battery was dead or dying, but the battery that was in it had just been charged to full less than a week prior, and had MAYBE seen 15 minutes of use. But, after the first time it did that, it didn't do it again.. Until... Now it's happening more frequently. Not ALL of the time, but a few times a week. I am going to reduce the rating, because this is only half a year old, and start to show issues already. For over $70, I would expect a little more robust quality.

Since I have purchased this light, I have bought a few more higher end, purpose built lights. These other lights have shown me just how versatile the PD35 is. One thing I do like on my really long distance throw light has that this one doesn't. Is a super low light setting ( 1 lumen). As silly as that sounds, that feature is very nice if you need to look at something close up without losing your night vision. Another one comes from my flood light.. That's a battery power level indicator. Personally, I like the indicator on the Zebralight the most. It blinks and tells you what percentage the battery is at. Very handy. One more thing i wish this light had was a micro USB charging / charger port. My slyde king does, and was also a fraction of the cost of this light.

If you set this any higher than the third position it is to bright to use. I have a 5 cell Mag Light that isn't as bright.

I use rechargeable cells in it and a single battery lasts about a day. Sometimes I have to change it in the afternoon but not always.

Esteban A. Valle
5.0 out of 5 stars Voltage controlled brightness, light filled with excellence. Nothing better.
Reviewed in the United States on January 31, 2015
Verified Purchase
This is an incredible flashlight. As a first purchase in the professional/tactical flashlight market, or as a do-everything-go-anywhere light, you will not be happier with anything else. Buy a Fenix—this one.

I was originally looking to buy a SureFire, something like the E2D LED Defender. I figured that Fenix was a "cheap off-brand" but I was totally wrong. This flashlight is such high quality that I could not imagine how it could be made sturdier. Even the threading for the tail-cap (and flashlight head) are square threaded, which means they were carefully machined and anodized instead of being simply tapped (which would produce weak triangular threads). Even the small holster that it comes with the light is super high quality. I had figured it would be a cheap throw-away holster that I would never use; this holster is made of 1" military spec flat nylon webbing, and it looks incredibly durable. No weak stitching to fall apart here.

The entire flashlight is aluminum, Type III hard anodizing; don't expect the black coloration to wear down any time soon, and minor scratches don't show through. The lens is real glass, and shouldn't discolor or fade like plexiglass.

The light is incredibly bright as well. I've been used to Black Diamond headlamps which put out a rated 120 lumens. What a change! Although I don't think they are using the same measurement standard as Fenix, this 960 lumen light is seriously, blindingly bright (if not 8x more so). The eco mode on this flashlight puts out enough light for hiking or even light scrambling. With 150 hours of runtime on Eco, you'll never run out of batteries. The Turbo mode is bright enough to be used as a stun weapon, instantly blinding anybody.

The only trepidations that I have about this light: I wish the light could tail-stand. As it is now, the rubber on-switch extends past the metal fins, so the light won't stand on its end. I also wish there was a way to instant-on to the Turbo mode, in addition to the normal behavior which remembers the brightness settings last used.

The light will only stay on Turbo mode for 5 minutes before dropping down to High. This happens to prevent overheating. The light can be reinstated to Turbo mode by a quick power-cycling (turning off then on again resets the timer), but be cautious as the light could overheat if not well ventilated. Another fault: The light can only stay on High mode for 30 minutes, for the same reason above, after which it will revert to Mid brightness.

The brightness is current regulated. This combined with the excellent voltage regulation means that the brightness of this flashlight does not deteriorate as the batteries are depleted. Most lights slowly drop in brightness, and the ratings are only for fresh batteries. This light maintains a constant brightness at all times (caveat: if the batteries get too low, the light will drop down to the next brightness level automatically). I have tested half-depleted batteries and brand new ones sequentially, and the brightness on all levels reads functionally identical on a lux meter.

rjb
3.0 out of 5 stars Three Stars
Reviewed in Canada on July 20, 2014
Verified Purchase
Should have rechargeable batteries instead
Read more
Report abuse
See all reviews