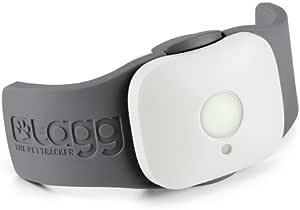 Visit the Whistle Store
2.9 out of 5 stars 1,309 ratings
Available at a lower price from other sellers that may not offer free Prime shipping.

10-Time Award Winning Cat and Dog Tracker Tagg-The Pet Tracker is the nation's leader in GPS pet-tracking technology. Tagg is keeping America's pets safe by monitoring their safety 3.6 Million times a day. Not to be confused with the common microchip, Tagg uses advanced GPS and wireless technology on the nation's largest network to help you to find your pet anytime and anywhere. Additionally, Tagg can track your pet's activity levels. Give you and your beloved pet the safety and security you both deserve. Don't Let Your Pet Become a Statistic More than 10 million pets are lost each year. A microchip is simply not enough. A microchip does not alert you if your pet is lost or show you their location and requires your pet to be brought to a facility. With Tagg Technology, if your furry friend strays from home, Tagg-The Pet Tracker will alert you via text and email. This empowers you to find them quickly before they are in danger so you can bring them home safe. Activity Tracking Vets and Pets Agree: A Healthy Dog is a Happy Dog. Nine out of ten vets agree that it is beneficial to have a device that tracks and manages a dog's activity level. Vets also recommend that dogs get 30-60 minutes of exercise per day. Is your dog getting enough? With Activity Tracking, learn how active your pet is - and be proactive about their health and exercise. Stay in Touch with Your Pet using Tagg and our free 2013 "Best Pet Mobile App" Tagg works with any mobile phone with SMS. For those with smart...

Free monitoring will expire 9/25/14 and then there will be a small monthly fee to keep the monitoring active through the tagg website.

2.9 out of 5 stars
2.9 out of 5
1,309 customer ratings
How does Amazon calculate star ratings?
Amazon calculates a product’s star ratings based on a machine learned model instead of a raw data average. The model takes into account factors including the age of a rating, whether the ratings are from verified purchasers, and factors that establish reviewer trustworthiness.

Zand05
1.0 out of 5 stars 18 months of service and 4 trackers later...
Reviewed in the United States on April 4, 2015
Color: WhiteVerified Purchase
We purchased this September 2013 so by now I feel like I can give a fair and (relatively unbiased review.)
First off, we have never had more than 2-3 days of battery life despite all assurances it should be longer. And yes, it in an excellent location, has good reception and the dog stays in the home zone 80% of the time. As well, it's never exposed to water and we keep it clean and protected.
This was a slightly annoying issue but well worth the fact that it did save our German Shorthair Pointers life after she got scared, ran away, got hit by a car, and kept going several more miles.
Tracking is a 3 minute delay so a speedy dog (like ours) does cover a lot of ground in that time. It wasn't till she stopped from exhaustion that we could actually locate her. But credit does go to Tagg cause we wouldn't have found her without it.
However, there have been several other occasions where she has gone adventuring, and it's never notified us, or notified us 15-20 minutes after her departure.
With such limited battery capability there have also been occasions where with 50-60% charge it dies while trying to track her.
This was the first year, and while these limitations were annoying we were grateful to have some sort of tracking system.
The last 6 months however, have pushed our opinion from 4 stars down to one.
Literally the week the warranty expired our tracker died. One very unhelpful customer representative was like "too bad, your past warranty, you can buy a new one for $99". Thankfully after another try we got an understanding rep and a week or so later a refurbished tracker was sent out.
The new one still only had 2 day battery life, and a month later, that one died. (By death, I'm referring to no alerts, no tracking, no charging, no nothing...)
It took repeated calls and emails to get any customer service. They assure you they will respond within 24-72 hours. And it doesn't happen. However, with patient persistence and repeated troubleshooting, two plus weeks later I received another tracker. (With $13 of shipping)
This tracker lasted a blissful 3 months. And suddenly died. Once again, calling into customer service. The guy was nice and we went through all the troubleshooting (hey, we actually know the routine, I did try and update it before calling in) and said "this will have to be upgraded to our technical team. You will hear back in 24-72 hours."
5 days later...still no reply.
So, the verdict? A decent concept. Terrible customer service.
We paid for a tracker and monthly service. By the nature of this product, customer service should be MUCH more time sensitive! Out of the 18 months we have paid for there's been at least 6-8 weeks our dog has (and currently is) unprotected/untracked due to faulty product and extremely slow company response. Add to that a glitchy product with very limiting parameters. I hate to say, but I would steer clear and look to another product.
Hopefully as this company has been bought by Whistle they will take notes on these issues and adjust accordingly. Otherwise they have lost not only me (as an attempted) loyal customer but my recommendation to others as well.
Read more

Robert
3.0 out of 5 stars Great Product, But Bad Pricing Scheme
Reviewed in the United States on June 30, 2012
Color: WhiteVerified Purchase
I have had this product for about two weeks now, and would like to write a review for those who are thinking of getting one.

A few months ago, my Simba (a Shiba Inu) managed to get himself off-leash to chase a rabbit while I was walking him. He ended up in a juggle with full of woods and long grasses. He did not come back home that night. My wife did not get any sleep that night. Obviously she blamed all these to me, and I even heard divorce (I know...it sounds crazy). To make the story short, I was able to get him back from the woods the next morning after 2 hours of tree by tree searching. From this experience, I have been looking for a GPS tracking device for Simba. I want something small and light, and work with iPhone app. Nothing on the market comes close to what I was looking, until I found Tagg. Immediately I knew that this is what I have been looking for.

The product works perfect. It is very light and compact, and has a long battery life up to 30 days. You can attach it to the collar, and won't affect the dog's mobility (He is about 22 LB). With this product attached to him, I have released Simba to the woods in my backyard a few times for testing. I was able to know exactly where he was, and I could track him down if I needed to. The accuracy of tracking is amazing: within a circle of 3 yards. One time, the tracking device got lost while Simba was running in the woods. I was able to track down and find the device very easily.

So why did not I give a 5 star rating for this product? Here are a few things that you might need to be aware:
The tracking is static, not continue like a GPS navigation system. You have to activate it by pressing "Locate" in the App. It takes about 1-2 min to locate the device on the map. If your dog is running, you won't be able to see him moving on the map. Essentially, the GPS tracking function is performed on demand. While this is a drawback, but it is also probably the reason why it can have such a long battery life on such a small device. I think they can improve the product by adding a continue tracking mode.

What I dislike most about the product is its pricing scheme. The product kit (hardware) itself costs $98 from Amazon, very reasonable. But you have to pay additional $7.99 monthly service fee (Note that first 3-month is free) to use it. What comes with the service charge is email, text message notifications. You define a perimeter around your house when you setup the device. Every time when the dog goes out of the range, you will get a notification. While this is a nice service/feature to have, I don't find it is something I would pay $7.99 a month for. For a dog to get lost is an accident. It would not happen more than a few times a year. I would not want to pay a monthly fee for a few times of use each year. In fact, I would be willing to pay one time price of $200 for this product to avoid a monthly service fee.

I am now on the fence as whether to keep it or return it. I hope the company will seriously consider changing the pricing scheme. I could see that they would lose a lot of customers with the current pricing strategy.
Read more
2,188 people found this helpful
Helpful
Comment Report abuse
See all reviews from the United States

Page 1 of 1 Start overPage 1 of 1
This shopping feature will continue to load items when the Enter key is pressed. In order to navigate out of this carousel please use your heading shortcut key to navigate to the next or previous heading.
Back
Next
Pages with related products. See and discover other items: cat whistle, gps cat collar, gps chip for dogs, cheap pet tags, direction maps, paw tracker