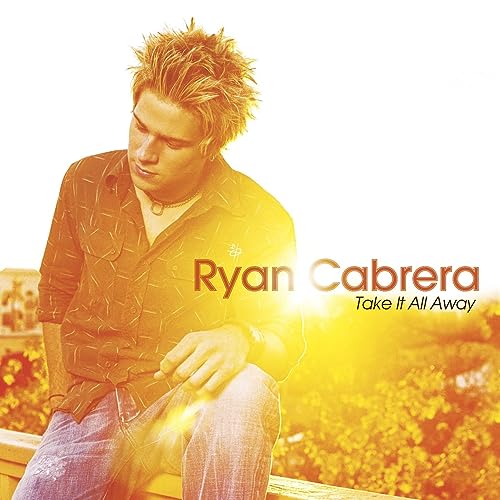 Take It All Away (U.S. Version)

Ryan Cabrera
August 17, 2004
4.2 out of 5 stars 240 ratings
See all 11 formats and editions Hide other formats and editions
Buy the CD album for $14.98 and get the MP3 version for FREE.&nbspCD album ships from and sold by Amazon.com. Terms and Conditions. Does not apply to gift orders. Complete your purchase of the CD album to save the MP3 version to your Music Library.

4.2 out of 5 stars
4.2 out of 5
240 global ratings
How are ratings calculated?
To calculate the overall star rating and percentage breakdown by star, we don’t use a simple average. Instead, our system considers things like how recent a review is and if the reviewer bought the item on Amazon. It also analyzes reviews to verify trustworthiness.

On The Way Down ^^^ Lead single. Shows off decent emotion, and although a tad whiny (which of His songs aren't?!!!:-) ) it's very catchy and like-able. I like the guitars after He says, "You're all I wanted/You're all I needed, now/You're all I wanted/...All I wanted..." Then they kick in. I think that instead of this, Let's Take Our Time, should've been lead single. It's much more upbeat and catchy. It's also happier, which sells more records! 4/5

True ^^^ Your All-Human type of ballad. Cabrera sexily croons His way through this one, and it works wonders and miracles. There is something about the sincerity in His young heart, His soul, mostly, in His vocals...I fell head over heels for this one back in 2005, I believe. I felt like this so much, for a Guy named Justin, who was cool with Me and such, but I think He wanted to "Just Be Friends, and kinda flirt once in a while. That's what I would say; He's a funny flirt, but primarily, first and foremost, Straight, sadly. I would've made Him happy... 5/5

Exit to Exit ^^^ Decent pop-rock goodness. It's not super-standout-able but it's good, nonetheless. 4.25/5

40 Kinds Of Sadness ^^^ The rockiest track so far. It's nice to know that John from The Goo Goo Dolls had part in this album. Because so far, it's flippin' amazing! I remember hearing a bunch of these songs before, and feeling next to nothing, save for when I listened to Exit To Exit a few times. 3.5/5

Take It All Away ^^^ Not bad. I believe this is another slow ballad. I thought it was pretty good, and his vocal delivery is some of the best on the album and very heartbreaking. 4.5/5

She ^^^ This is by far the most melancholy of all of His songs so far. And I'm obsessed with It! I'm totally waiting for Him to really, REALLY dig deep, and express His sadness and pure, yet true loneliness. Definitely a slow-groove keeper! For sure though, many will skip it because it's "too, too slow". Obviously, I *totally* disagree! 4.3/5

Blind Sight ^^^ Much better than Illusions. The lyrics are even better! This one was a pleasant blur. 3.6/5

I Know What It Feels Like ^^^ This songs OK. To be honest, it ended but didn't leave an impact on Me much. I have NO idea what it's about, so I'll give it another go, to be FAIR (listening to the 5x superior, Let's Take Our Time, His favorite track on the amazing album, TIAA); Still don't remember much. 3.3/5

Sabrina
4.0 out of 5 stars Great CD, Poor Packaging
Reviewed in the United States on June 18, 2016
Verified Purchase
I'm seeing Ryan in concert later this year and figured I should familiarize myself with his music as he was the only one on the lineup I didn't know! I'm so happy to have this CD in my collection! The sound is crisp and easy to sing and dance to!

I had to give it 4 stars because while the CD itself is perfect, the case was rather cracked, in several places. Fortunately it didn't affect the quality of the CD, but it was still a little disappointing. See pictures for the several cracks.
Read more

4.0 out of 5 stars Great CD, Poor Packaging
By Sabrina on June 18, 2016
I'm seeing Ryan in concert later this year and figured I should familiarize myself with his music as he was the only one on the lineup I didn't know! I'm so happy to have this CD in my collection! The sound is crisp and easy to sing and dance to!

I had to give it 4 stars because while the CD itself is perfect, the case was rather cracked, in several places. Fortunately it didn't affect the quality of the CD, but it was still a little disappointing. See pictures for the several cracks.

A. Venn
4.0 out of 5 stars I Enjoyed This Album
Reviewed in the United States on August 31, 2004
Verified Purchase
Hi,

I bought this album after seeing a link from the Nick & Jessica Variety Hour DVD (another recommended buy).

I bought it because Ryans not a bad looking guy.

And after a few listens have thoroughly enjoyed it.

Coming from someone who only ever buys Madonna or Kylie cds, this is a rarity for me to be entertained by an unknown

So yeh his album is really good.

He's alot like a guy over here we have called Pete Murray, except Ryan is young and hot and has a good voice, but their music is similar.

It's great party music, and will get you all dancing at your next patio party.

Everyone in Australia, import this album.

And everyone in the States, get it too.
Read more
One person found this helpful
Helpful
Report abuse

Pam Schwetz
5.0 out of 5 stars Taken Away
Reviewed in the United States on April 25, 2015
Verified Purchase
Well, I thought I reviewed this one a long time ago when I first bought it. I love this so much that recently when I opened my CD case the CD was gone...it got taken all away...anyways disappeared somewhere and loved it so much had to go and buy another copy....this was my first taste of Ryan Cabrera...love it lots. Great music.
Read more
Helpful
Report abuse

David Villarreal
3.0 out of 5 stars It's "True".
Reviewed in the United States on October 26, 2015
Verified Purchase
Bought it for one song only. But it was worth it.
Read more
Helpful
Report abuse

Spencer
5.0 out of 5 stars don't take it away
Reviewed in the United States on January 13, 2013
Verified Purchase
i'll feel 40 kinds of sadness when i'm gone! and then some! a great debut album! illusions will never be left behind!
Read more
Helpful
Report abuse

gavin green
3.0 out of 5 stars Love him
Reviewed in the United Kingdom on November 23, 2016
Verified Purchase
Only really bought this album for two songs lol
Read more
Report abuse

Sharron Hather
4.0 out of 5 stars How The Calling's second album should have sounded?
Reviewed in the United Kingdom on September 27, 2004
Verified Purchase
With a voice like a cross between The Calling's Alex Band and Lifehouse's Jason Wade, a musical style ranging from boyband balladry to American alt-rock, and produced by the Goo Goo Dolls' power ballad rock god John Rzeznik, talented young Cabrera couldn't really go wrong with this album.
While the title track, the gorgeous ballad Take it All Away, could easily be mistaken for one of Blue's classier efforts (but in a good kind of way), the album's first single, On the Way Down, is pure pop-rock bliss - a great melody, cracking chorus and Cabrera's emotive vocals rounding off a nigh-on perfect song.
Other highlights include the rocky Exit to Exit, the jangle-pop sing-a-long-to-the-backing-vocals 40 Kinds of Sadness, and the decidedly Calling-esque Blind Sight, although as a massive Goo Goo Dolls devotee, it's the John Rzeznik co-written Illusions that holds a special place on my iPod...
Despite weaker, more dance-orientated Timberlake-esque fare such as Let's Take Our Time and Shame on Me, Take It All Away is a fabulous album from a young man who promises much greater things to come.
Read more
13 people found this helpful
Report abuse