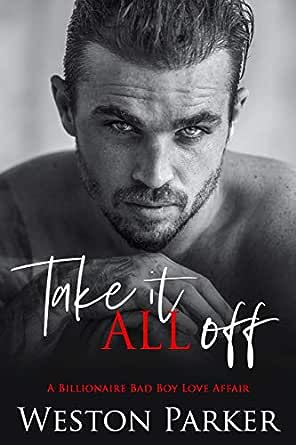 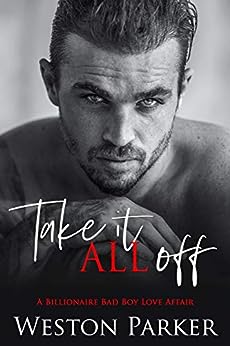 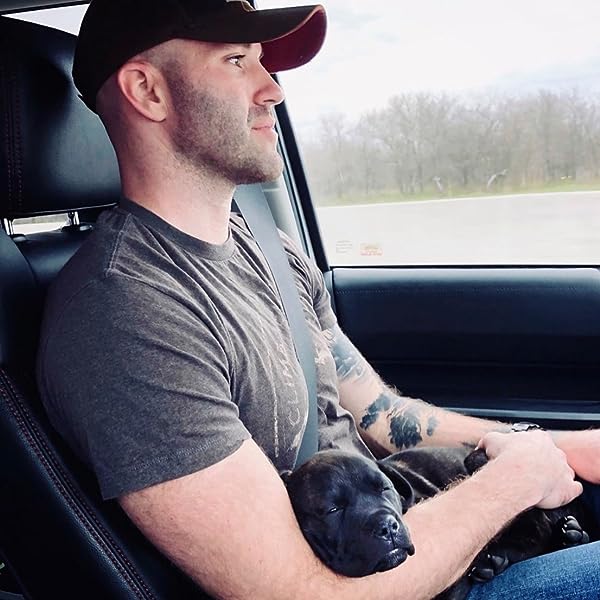 Take It All Off Kindle Edition

See what other Amazon readers are saying about Take It All Off...

"This book was absolutely fantastic! I couldn't put it down until I was finished, and I still wanted more!"

"I think this book is absolutely one of my favorites and I just loved it."

"Their story is sweet, fun, loving and just and all-around great read."

"I love the way the story is told from both perspectives giving a better understanding of each of the main characters."

"A wonderful story of two people who meet, are incredibly attracted to each other and finally fall in love!"

"I loved this book. Wes's books continue to amaze me. This one was extra special. He draws you into each character, personality flaws and all."

"Another must read from one of my favorite authors! I couldn't put it down!"

"The setting is as romantic as the story! Family, friends, pasta and wine. What more could you ask for?"

"Marco and Addy's story had me captivated from the very beginning. I literally read the book straight through in one sitting."

4.5 out of 5 stars
4.5 out of 5
172 customer ratings
How does Amazon calculate star ratings?
Amazon calculates a product’s star ratings based on a machine learned model instead of a raw data average. The model takes into account factors including the age of a rating, whether the ratings are from verified purchasers, and factors that establish reviewer trustworthiness.
Top reviews

B. Roscoe
VINE VOICE
4.0 out of 5 stars Marco & Addy’s Story Is About Family & Following Your Dreams; Florence's Culture & Beauty Enrich It.
Reviewed in the United States on June 4, 2020
Verified Purchase
Marco Ricci, thirty-four, always knew he wanted to go into business. His father gave him valuable advice at an early age by explaining the importance of learning English if business were to be his chosen path. Marco grew up and went on to build Ricci Logistics, and today he is a billionaire. Despite his huge international success, Marco has maintained his corporate offices in his hometown of Florence, Italy, and has become something of a local legend. Raised to be a good Italian son, he maintains a close relationship with his widowed mother. Her drama keeps life interesting, but he can’t imagine life without her. Although she is fiercely independent, he and his brother are constantly in contact with her and looking out for her needs.

Aldo, his identical twin, takes after their mother in the drama department. Although the brothers may look alike, their personalities differ. While Aldo is always looking for the next date or the next adrenaline rush, Marco can’t seem to pry himself away from his work. Regardless of their differences, the brothers remain very tight. They spend all their free time together. Both are adamant that they will not be marrying and having babies anytime soon, if at all, much to their mother’s chagrin.

Adaline Tidwell fell in love with the city of Florence when she arrived nearly five years ago, and despite her dream of travelling the world, Florence felt like home – and it remains her home for now. She loves the countryside, the architecture, and the passion of the locals. Although she misses her beloved brother Kyle back in Portland, Oregon, she is following her heart. Since her arrival, though, she has always lived paycheck to paycheck, and as such has always been at risk of running out of money and having to give up her dream and return home. Though Kyle would do anything to support her dream, she is too independent to become a burden to him. So when Addy loses her job suddenly, she finds herself in a bind. With rent due and no time for job hunting, she has three choices: ask Kyle for a loan, return home and give up her dream, or take the job her roommate offers her. Her roommate Elena dances at an exclusive strip club. Addy refuses to strip, but finally concedes and agrees to wait tables at the club to score quick cash. She has difficulty getting through her first shift, though, when she discovers just how handsy the customers are.

When Marco scores a big deal, he offers his to celebrate by showing his new partners a good time in Florence. Although not his cup of tea, he agrees to take the group of Chinese businessmen to a strip club at the end of an evening of wining and dining, taking a seat himself in a quiet corner away from the activity. He is startled by an angry waitress that appears next to him at the bar, but is struck first by her beauty, and then by her intelligence, when they engage in a brief conversation. Going on gut instinct, he offers her a job once her learns of her predicament.

Neither Marco nor Addy is looking for anything serious when they give into their attraction. Neither wants marriage and children. But as they continue to enjoy one another, it doesn’t matter how they define what they mean to one another. It becomes a relationship of sorts. But Marco knows that whatever he and Addy have won’t pass his mother’s scrutiny for one very simple reason: Addy isn’t Italian. And that knowledge means that the relationship will never result in marriage. Yet love finds him and Addy even though they aren’t ready for it and have a hard time recognizing it. The couple eventually earns a beautiful HEA.

Marco and Addy’s story is about family and following your dreams, and the culture and beauty of Florence enrich their story. It is nicely written. The plot is somewhat complex. The characters are nicely developed. It is written in first person. The POV alternates between Marco and Addy. I rate this book four stars.

I received a free advance copy of this book and am voluntarily leaving a review.
Read more
12 people found this helpful
Helpful
Comment Report abuse

Denise DeCrescito (From In Here)
5.0 out of 5 stars Addy & Marco have a wonderful story that proves 'l'amore vince' - love wins 💕
Reviewed in the United States on June 4, 2020
Verified Purchase
I’ve said it before about other books he has written, but here I am saying it again … this book, set in Italy, is one of Weston Parker’s best. I never want to really detail the storyline in a review; you can get that from the book blurb. I will tell you Adeline is a smart and strong heroine who goes after what she wants in life, having grown up with no support system aside from her brother, she depends only on herself. Marco is a brilliant and successful businessman who is also a mama’s boy, but not at all in a bad way. He has a twin brother who is also a good guy, and who encourages Marco to embrace life outside of just business.

Addy and Marco meet in a unique way and their relationship is a pleasure to learn about. These two have sizzling hot chemistry, smart banter, and a sense of humor like every good relationship needs. There are a couple of big obstacles that must be dealt with on the way to the well-earned HEA. This book has some wonderful secondary characters. (I’m wondering what Aldo and Elena would be like together!) The author’s style is so easy to read, it’s like enjoying hazelnut Gelato on a warm summer day … Delicious, decadent, and just so good you can’t resist.
Read more
3 people found this helpful
Helpful
Comment Report abuse

Marina
5.0 out of 5 stars A truly wonderful story!
Reviewed in the United States on June 11, 2020
Verified Purchase
The author is new to me and I honestly don’t know why I haven’t read him before! Take it all Off had my attention from the beginning to the end!
Marco intrigued me from the very start and the fact the story is set in Italy, is an added bonus due to my love of travel and desire to go there!!
Enter Addy, what a wonderful character she is! She is sassy, tells it like it is and doesn’t shy away from hard work! She is trying to live her best life in a beautiful country!
What I really loved about this book was the way Marco and Addy got to know each other! The sizzling tension between them could be felt and the banter was fantastic! I really didn’t want the story to end!!
This was a wonderful love story where the Billionaire meets his match! How will he overcome certain family members or are they destined to failure!
A truly amazing read!
Read more
2 people found this helpful
Helpful
Comment Report abuse

By Gladys Mills
5.0 out of 5 stars A great romance read!
Reviewed in the United States on June 10, 2020
Verified Purchase
This book was great! I enjoyed reading this book. Addy is in Italy working and loving the country. She gets fired from the restaurant and needs a new job. She meets Marco in a bar and he offers her a job. Excitement fills Addy and she excels at this job,but she also gets close to Marco sexually trying not to have a relationship. Why? Because Marco knows momma want approve of where she comes from. I did feel like the ending was a little rushed. Too much time spent on the sexy parts and not enough time on the relationships of the characters. Like the twin brothers, mother son relationship, and the girlfriend mother relationship. The book does have you feeling the characters' feelings and emotions. I cried. Great read! *** I voluntarily read a Review Copy of this book. All opinions stated are solely my own and no one else’s. ***
Read more
One person found this helpful
Helpful
Comment Report abuse
See all reviews from the United States