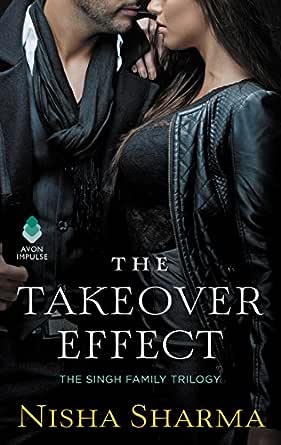 You've subscribed to Singh Family Trilogy! We will preorder your items within 24 hours of when they become available. When new books are released, we'll charge your default payment method for the lowest price available during the pre-order period.
Update your device or payment method, cancel individual pre-orders or your subscription at
Your Memberships & Subscriptions 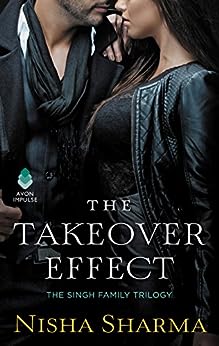 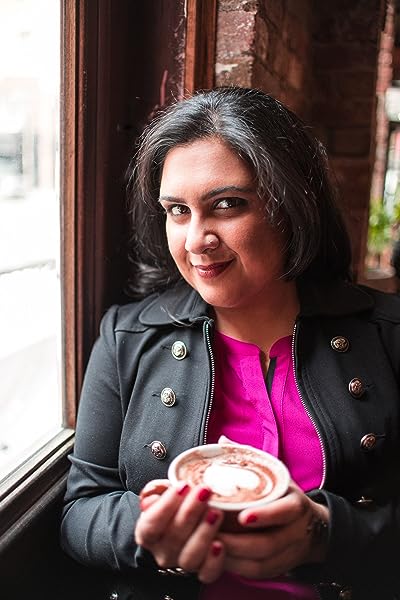 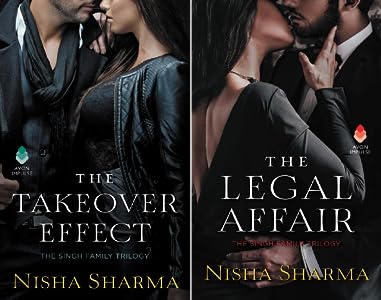 Nisha Sharma is the award-winning author of YA rom-com MY SO-CALLED BOLLYWOOD LIFE, and contemporary romance drama, THE SINGH FAMILY TRILOGY. She grew up immersed in Bollywood movies, eighties pop-culture and romance novels so it comes as no surprise that her work features all three. Her writing has been praised by Entertainment Weekly, NPR, Cosmopolitan, Teen Vogue, Buzzfeed, Hypable and more. She lives in New Jersey with her Alaskan-born husband, her cat Lizzie Bennett and her dog Nancey Drew. You can find her online at www.nisha-sharma.com or on Twitter and Instagram @nishawrites.

“I am all about those Singh brothers!” -- Katee Robert, New York Times bestselling author

“Nisha Sharma launches her Singh Family trilogy with this tale of sexy boardroom dealings and untapped family secrets... The sizzle of the bedroom scenes is matched by the intrigue of the boardroom, drawing you into the mystery at the novel’s center as well as Hem and Mina’s crackling chemistry.” -- Entertainment Weekly

“Sharma’s latest is highly recommended for lovers of romances involving big business and family drama and romances imbuded with diverse flair, as well as for fans who fell in love with the work of Sonali Dev and are looking for more stories with a bit of Bollywood sparkle and melodrama.” -- Library Journal (starred review) --This text refers to the mass_market edition.

4.0 out of 5 stars
4 out of 5
40 global ratings
How are ratings calculated?
To calculate the overall star rating and percentage breakdown by star, we don’t use a simple average. Instead, our system considers things like how recent a review is and if the reviewer bought the item on Amazon. It also analyzes reviews to verify trustworthiness.

Nenia Campbell
TOP 500 REVIEWERVINE VOICE
3.0 out of 5 stars A quick, satisfying read
Reviewed in the United States on August 30, 2020
Verified Purchase
Corporate/billionaire romances were basically done to death in the wake of Fifty Shades of Grey's popularity, and since most of them were equal parts superficial and terrible, I basically stopped reading them. Until I heard about THE TAKEOVER EFFECT, a romance between an Indian hero and heroine who are on opposing sides of a business acquisition. And then I was like, "I NEED IT."

Mina is a lawyer at a firm that used to be her mother's, but was wrested away by her terrible uncles. They're holding partnership over her head with her newest assignment: guide Bharat (a tech company) through their takeover and advise them to agree to the terms, and she'll be made partner. With a heavy heart, Mina goes to her new assignment, uncertain of what she'll do.

Hem is the prodigal son in his family. He turned his back on the family business before it went public, but after his father has a heart attack due to the stress of his suddenly struggling company, he returns to help out with damage control. And obviously, the first time he sees Mina, he can't take his eyes off her.

The two of them have to fight their attraction to each other since a relationship would be a conflict of interest, and that's very important because it's starting to look like Bharat's sinking ship is an act of corporate espionage. Someone wants the company to fail. Hem and Mina suspect it's probably WTA, the company that wants to see the takeover happen, but the burden of proof is entirely on them.

As it turns out, I've actually read something by this author before-- MY SO-CALLED BOLLYWOOD LIFE, which I did not like. This book was leaps-and-bounds better. Mina is one of the strongest romance heroines I've encountered in a while. I loved her fortitude, her competence, and her agency. She was willing to do what it took to succeed and make herself happy. Seriously, she was the best. I was less in love with Hem, who was very alpha (which is not really my cup of tea). He's much more gentlemanly and respectful than your typical billionaire hero, though.

Honestly, this could have been so cliche, but the corporate espionage parts were actually some of the best. I can't tell you how nice it is to see a corporate romance that isn't all garish conference rooms and mysterious business portfolios. This actually felt real. I also love how Indian culture was infused into the story. Mina and Hem's interactions with their families, all of the insights into tradition and cultural norms, and the WONDERFUL, drool-worthy descriptions of food were A+.

I'm giving this three stars because I liked it, but there were also things in it that it didn't do so well. I wasn't that fond of the hero. He wasn't awful, or anything like that, he just wasn't a favorite. I also felt like the sudden and intense closeness they felt was a little contrived and weird. I know, this is wish-fulfillment fantasy in book form and the author did manage to find a way to make it work (sort of), but things were so rushed along that I found myself wondering if they had met before as children and I missed it, or if they had some sort of previous connection to explain their intensity. I kind of wish that had been the case, as that would have helped me suspend my disbelief.

That ending though... it was one of the most satisfying conclusions I've paid witness to in a while.

Melody
3.0 out of 5 stars Corporate Espionage is Fun
Reviewed in the United States on April 4, 2019
Verified Purchase
Corporate espionage is fun. Maybe I'm a boring adult now but the office politics was probably as much fun for me as the romance. The romance here does moves fast, but once your buckled in it's a fun ride. Mina is such a fun heroine. And this leaves off in a perfect way to set up the next book. I'm glad I won't have to wait too long.

My biggest disappointment was that during the main climax moments or moments of highest tension with our antagonist there seemed to be nods to his weight slipped in. Descriptions are one thing but the timing and tone of those descriptions felt like a character judgement, and was disappointing and could take me out of the satisfaction of the moments happening.
Read more
One person found this helpful
Helpful
Report abuse

Kindle Customer
5.0 out of 5 stars I LOVE THIS BOOK
Reviewed in the United States on October 22, 2020
Verified Purchase
Yes…the headline needed to be written in all caps :). I LOVED this book. It was a smooth read for me. I had no trouble immersing myself into the lives of Mina and Hem and the rest of the Kohli and Singh family. Nisha Sharma was able to weave a delicate balance between romance and intrigue. I definitely loved the business aspect of the story and it has given me an appreciation for businessmen and businesswomen everywhere, not to mention lawyers. The romance aspect was also believable and well put together. I didn't want the story to end.

Trust me…you want to read this book. I can't wait to read the second book in the trilogy.

Thank you Mrs Sharma for a wonderful and engaging read.
PS: to the folks at Avon books, thank you for making the paperback so easy and wonderful to handle. It definitely added to my enjoyment of the book.
Read more
Helpful
Report abuse

HL
4.0 out of 5 stars 4.5 stars.
Reviewed in the United States on April 12, 2019
Verified Purchase
This was a very good read. I did have to use my dictionary a lot while reading. There were words that I was not familiar with and did not want to chance missing anything. Luckily it was just a click away on my Kindle app. I don’t think I would have enjoyed a book or audio as much. Looking forward to the next in the trilogy!
Read more
Helpful
Report abuse

Laura DeSilva
5.0 out of 5 stars I loved this book!
Reviewed in the United States on April 4, 2019
Verified Purchase
I loved this book! I think it's one of the most accurate representations of working at a tech company that I've read in the Romance genre, and the alpha male was swoon-worthy.
Read more
2 people found this helpful
Helpful
Report abuse

*z*
4.0 out of 5 stars Good.
Reviewed in the United States on April 11, 2019
Verified Purchase
A good book, but I could really do without the crude and graphic sex. Unnecessary and detracts from otherwise great writing. Still, it was worth reading. Looking forward to the rest of the trilogy.
Read more
Helpful
Report abuse

AJ
5.0 out of 5 stars Drama, drama, drama
Reviewed in the United States on May 28, 2019
Verified Purchase
Gimme a hot, kara-wearing Sardar any time. Any day.
Loved this happy, fun book about an Indian-American family pulling together when it mattered. Hem was delicious. Did I mention that already?
Read more
One person found this helpful
Helpful
Report abuse

Stacey C. Garrison
5.0 out of 5 stars Taken over with speed
Reviewed in the United States on May 27, 2020
Verified Purchase
This was a fast paced rollercoaster. Well developed charActers bloom.into a relationship, which involves family relationships, food, careers and sex. That is a magic combination for me. Loved it!
Read more
Helpful
Report abuse
See all reviews

A. Mathewson
1.0 out of 5 stars Not my cup of tea
Reviewed in the United Kingdom on September 29, 2020
Verified Purchase
I stopped reading after a few chapters. The characters were so unsympathetic and humourless. The writing was aggressive and too much bad language
Read more
Report abuse

Kindle reader
4.0 out of 5 stars Beautifully written
Reviewed in India on November 25, 2019
Verified Purchase
This was written so well— the characters come alive, not just the main protagonists, but also everyone else. And I do love me a tall heroine!
Read more
Report abuse

Amazon Customer
4.0 out of 5 stars Good read!
Reviewed in India on April 15, 2020
Verified Purchase
Love the plot and the characters especially the chemistry between Hem and Mina! Corporate espionage is something that always grips me and now I can't wait for the next book in the trilogy! Please get it out soon ❤️
Read more
Report abuse
See all reviews