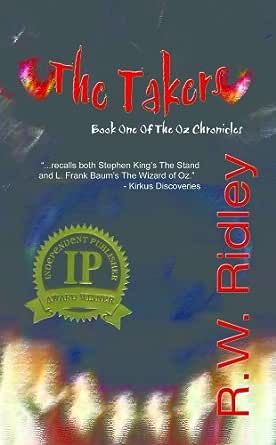 You've subscribed to The Oz Chronicles! We will preorder your items within 24 hours of when they become available. When new books are released, we'll charge your default payment method for the lowest price available during the pre-order period.
Update your device or payment method, cancel individual pre-orders or your subscription at
Your Memberships & Subscriptions
There was an error. We were unable to process your subscription due to an error. Please refresh and try again. 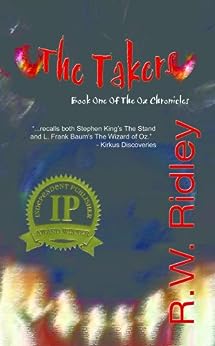 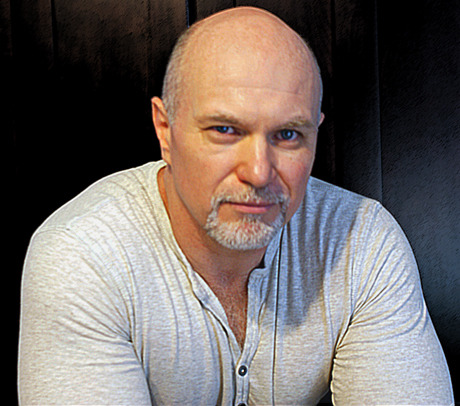 The Takers: Book One of the Oz Chronicles Kindle Edition 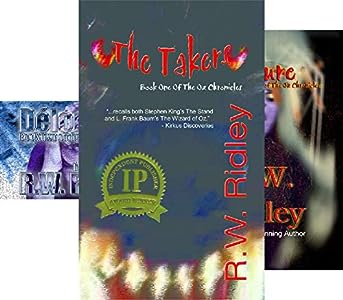 R.W. Ridley lives in Charleston, SC with his beautiful wife, a hyperactive dog, three arrogant cats, and one ugly mortgage. --This text refers to the paperback edition.

4.2 out of 5 stars
4.2 out of 5
119 global ratings
How are ratings calculated?
To calculate the overall star rating and percentage breakdown by star, we don’t use a simple average. Instead, our system considers things like how recent a review is and if the reviewer bought the item on Amazon. It also analyzes reviews to verify trustworthiness.
Top reviews

Pop Bop
TOP 500 REVIEWER
4.0 out of 5 stars An Excellent Example of "New Bizarro"
Reviewed in the United States on July 3, 2016
Verified Purchase
Some of the most interesting work being done in fiction is in the older-middle-grade young YA category. And some of the best work there is from self-published and small press authors. This book is a great example of that type of New Bizarro work.

The story starts out in a straightforward, if odd, fashion. Oz awakens from an illness to find that everyone is gone. He wanders his abandoned neighborhood and learns that some sort of evil entity has arisen and has "taken" everyone. He picks up a companion, and his dog, and goes into survival mode. We learn that the whole thing may be drawn from the comics written by a developmentally disabled boy, Steve, who committed suicide. So, we're down the rabbit hole at this point. Is this adventure going on in Oz's head; is it part of the neighbor boy's story somehow come to life; is it "real"? Don't know, and the author keeps you guessing. NO SPOILERS, but from there we follow Oz as he picks up an odd assortment of companions and fights to survive while he searches for answers.

On the one hand you could fault this book for being less than professionally edited, for some awkward bits, and for being less than highly polished. Rubbish I say. I'm happy to skip over some errors and some rough patches in order to get a story with energy, raw imagination, creative honesty and novelty.

I'm happy with the whole head trip approach. The author avoids quantum gobbleydegook, (although that can be fun too), and goes for a more mythical, fantasy, bent-reality approach. This doesn't get in the way of solid storytelling, it just gives the author freedom to spread himself and to violate some of the standard rules of plotting. This book has been compared to the "Wizard of Oz", and that's apt if you think of "Wizard..." as a sort of head trip, (did Dorothy really go to Oz?), that is a fantasy that feels real.

Anyway, the book is fun. It's suspenseful and thrilling. There is some graphic violence, but nothing over-the-top. Oz is a well developed character. There is an undercurrent relating to Steve's suicide, and Oz's guilt over his treatment of Steve, that moves this beyond hack and slash zombie type stuff.

The book closes with a reasonably satisfying ending, but leaves open a what if that points towards a sequel. (In fact, there are five more volumes that apparently get progressively weirder.) So, this is fine as a one-book trial or as a series opener. I count it as a happy find.

(Please note that I found this book a while ago while browsing Amazon Kindle freebies. It is currently a kindleunlimited choice. I have no connection at all to either the author or the publisher of this book.)
Read more
3 people found this helpful
Helpful
Report abuse

Caleb Blake
4.0 out of 5 stars Dark adventure for younger readers
Reviewed in the United States on September 4, 2013
Verified Purchase
This review is cross-posted from Papyrus Independent Author Reviews.

The secret is not to let them know you're aware of them. Keep quiet. Keep moving. And whatever you do, don't speak their name.

"The Takers" is set in a contemporary Earth which has somehow been invaded by creatures that have devoured nearly all the population. It has a post-apocalyptic feel, a landscape with empty houses and abandoned cars strewn along highways. The atmosphere is heavy with silence and the dread of these marauding creatures, who appear when acknowledged to consume any in their path.

Oz Griffin wakes up after a week in the delirium of illness, to find his house empty with no sign of his parents. As he searches his neighbourhood for people and answers, he stumbles across several terrifying creatures prowling the area, alerting him to an immediate danger and providing the dreadful clues to what might have happened to his local community.

He decides to mount an expedition to his uncle's home in another district. With his German Shepherd and a car he doesn't know how to drive, he sets off on a journey that evolves over the course of the book into an epic mission to defeat these predatory creatures and restore his world.

I liked the idea of this story. It remained dark, while not presenting any material that I felt unsuitable for younger adults. It delivers plenty of adventure, action and suspense. I was intrigued by the author's use of the disabled in the story, in particular those with Down Syndrome. I think challenging the perceptions of the reader, by presenting these characters in an unexpected role, can be a powerful tool to refocus awareness. This is not to imply that this story takes a particularly heavy-handed or didactic approach, just that playing with perceptions can sometimes elicit a consideration from the reader that may not have otherwise been triggered.

With a German Shepherd, a small gang of survivors, a particularly wise gorilla, a comic book and hordes of enemies, as mysterious as they are vicious, this is a vividly imagined adventure in a dark world. The only thing I didn't really appreciate was the plot mechanism used to end the story. It left me a little deflated after enjoying the majority of the novel.

Griffin is an interesting character for a young adult fantasy in the sense that he is an anti-hero. Nothing could alienate the reader from Oz more than the opening sentences of the book:

"We killed the retarded boy. He took his own life, but we killed him just the same."

It's a bold move by the author to cast such a dark shadow on the character with which the reader is going to take this journey. The approach seems vaguely reminiscent of Stephen Donaldson's portrayal of Thomas Covenant - one of the most infamous anti-heroes in the fantasy genre, but translated into a form that a younger reader can appreciate: bullying, the antagonism of children with disabilities and the potential result.

The book focuses on Griffin's redemption and the continued influence of Stevie Dayton almost as a manifestation of his guilt. We experience the character's growth over the course of the story and the qualities within him, previously used to inflict pain on Dayton, are gradually transformed into a positive force.

I had no issues with the prose in this novel. It was very readable, managed to generate the right atmosphere and was dark without being too dark given its target audience. There were no noticeable errors in the text, nor did I stumble across clunky expressions or word misuse.

"The Takers" is the first book of a series of novels called "The Oz Chronicles". As of this review, there are six books, so if you like the first, there's quite a bit of material to move on with.

"The Takers" was the recipient of the 2006 IPPY (Independent Publisher Book Awards) for Horror, with the second instalment, "Délon City", taking a bronze IPPY in the subsequent year.
Read more
One person found this helpful
Helpful
Report abuse
See all reviews

Angie P
5.0 out of 5 stars Great read for boys
Reviewed in the United Kingdom on March 30, 2013
Verified Purchase
My 11 year old son has a teenage reading age & we struggle to find books that hold his attention & are suitable. This book has captured his imagination, he reads it voluntarily (result!) & discusses the strange plot with me often. Great stuff!
Read more
Report abuse
See all reviews
Back to top
Get to Know Us
Make Money with Us
Amazon Payment Products
Let Us Help You
EnglishChoose a language for shopping. United StatesChoose a country/region for shopping.
© 1996-2021, Amazon.com, Inc. or its affiliates