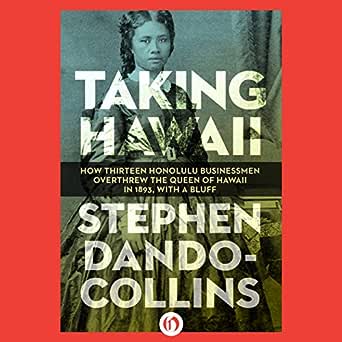 Taking Hawaii: How Thirteen Honolulu Businessmen Overthrew the Queen of Hawaii in 1893, With a Bluff

Dee Raine
4.0 out of 5 stars Amazing story!
May 28, 2018
Format: Kindle EditionVerified Purchase
If you like history this is a winner. However, I couldnt help feeling ashamed of the United States treatment of the Hawaiian people and nobility. My next visit of Honolulu will be more historically oriented after reading Taking Hawaii.
Read more
3 people found this helpful
Helpful
Comment Report abuse

Jacqueline aka Granny Jackie
4.0 out of 5 stars A good thumbnail sketch of Hawaiian History
June 20, 2018
Format: Kindle EditionVerified Purchase
Anyone interested in the recent history prior to annexation of Hawaii to the US should enjoy this book. I never knew anything about Hawaii's monarchy and government prior to annexation.
Read more
2 people found this helpful
Helpful
Comment Report abuse

Anna Trinity Redhawk
5.0 out of 5 stars Loved this book.
January 14, 2019
Format: Kindle EditionVerified Purchase
I was given a brief look into the past. I was shown what happened , how it happened and even why it happened. I found myself angry, sad and more as I read what happened here. If we have any wisdom at all, we can learn from this. If not then we are doomed to repeat it. We have a choice. Which one will we make?
Read more
Helpful
Comment Report abuse

kat
1.0 out of 5 stars There are much better books about the overthrow of the Hawaiian Kingdom.
November 17, 2018
Format: Kindle EditionVerified Purchase
Not entirely accurate and not very well written.
Read more
2 people found this helpful
Helpful
Comment Report abuse