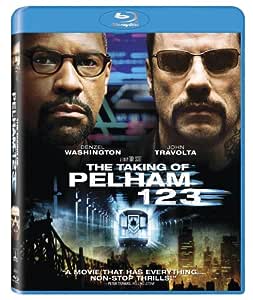 Walter Garber (Denzel Washington) is a New York City subway dispatcher whose ordinary day is thrown into chaos by an audacious crime: the hijacking of a subway train. Ryder (John Travolta), the criminal mastermind behind the hijacking and leader of a highly-armed gang of four, threatens to execute the train's passengers unless a large ransom is paid within one hour. As the tension mounts beneath his feet, Garber employs his vast knowledge of the subway system in a battle to outwit Ryder and save the hostages. But there's one riddle Garber can't solve: even if the thieves get the money, how can they possibly escape?

John Godey's 1973 novel The Taking of Pelham One Two Three boasts a suspense situation so surefire that even the directorial bad habits of Tony Scott can't ruin this latest movie version. Four armed men seize a New York City subway train, isolate one car, and threaten to start killing passengers if a ransom isn't paid within the hour. The ransom was a million dollars in the book and also in Joseph Sargent's solid 1974 movie, in which Robert Shaw played the mercenary leading the hostage takers and Walter Matthau was the growling transit cop trying to outsmart him. In 2009, the title has gone digital--The Taking of Pelham 123--and inflation has jumped the asking price to $10 million. Where Shaw's menace was steely, John Travolta opts for manic, and shamelessly has a blast in the master villain role. His adversary, cagily underplayed by Denzel Washington, has been upgraded in civil-service rank but also demoted on suspicion of taking a bribe. This colors the dynamics of the dialogue between Washington at his control-center console and Travolta on the motorman's microphone aboard the stalled train.

So far, so reasonably good. But the director's trademark tactics keep getting between, well, everything. From the get-go, the visuals are subjected to pointless and irritating stutter effects, speeding-up/slowing-down, gratuitous camera movement, and the interposition of dirt- or light-smeared panes of glass between the camera and people we'd appreciate a clear look at. The 1974 movie settled for one police car being wrecked as the ransom is rushed uptown; Scott requires multiple collisions, each the occasion for police cruisers taking Lethal Weapon-style flight. The hostages in the earlier film were wittily individuated, a multicultural group portrait of the city at that mid-'70s moment; the ones on Scott's train--and also Travolta's fellow perpetrators, including that wonderful character actor Luis Guzmán--barely register. On the upside, John Turturro and James Gandolfini shine as two guys who (like the actors themselves) are very good at their jobs—respectively playing a hostage negotiator and His Honor, the mayor. The screenplay by Brian Helgeland (L.A. Confidential, Mystic River) strives intelligently, if formulaically, to add new dimensions to the main characters and to offer its own gloss on the current economic meltdown. --Richard T. Jameson