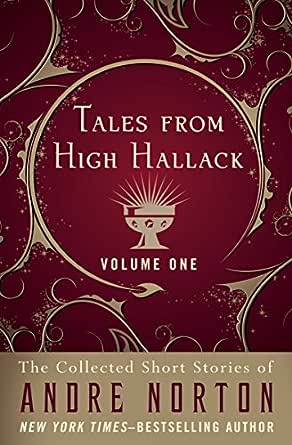 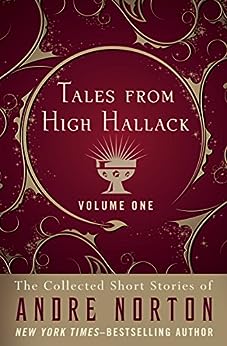 Beyond your wildest dreams
From DC & Neil Gaiman, The Sandman arises only on Audible. Listen free with trial
click to open popover
Books In This Series (3 Books)
Page 1 of 1Start OverPage 1 of 1
Previous page
Next page
Complete Series

The Collected Short Stories of Andre Nor …
Andre Norton
$12.97

For well over a half century, Andre Norton was one of the most popular science fiction and fantasy authors in the world. With series such as Time Traders, Solar Queen, Forerunner, Beast Master, Crosstime, and Janus, as well as many standalone novels, her tales of adventure have drawn countless readers to science fiction. Her fantasy novels, including the bestselling Witch World series, her Magic series, and many other unrelated novels, have been popular with readers for decades. Lauded as a Grand Master by the Science Fiction Writers of America, she is the recipient of a Life Achievement Award from the World Fantasy Convention. An Ohio native, Norton lived for many years in Winter Park, Florida, and died in March 2005 at her home in Murfreesboro, Tennessee.

Jean Rabe had the immense pleasure of co-authoring novels with Andre Norton: Taste of Magic, Dragon Mage, and Return to Quag Keep. She also edited an anthology with Norton, Renaissance Faire, and edited several of her short stories for various DAW Books anthologies. Rabe and Norton were friends, longtime pen pals, and shared books and stories about their cats and dogs. Rabe is the author of thirty fantasy and adventure novels, and many, many short stories.
--This text refers to an alternate kindle_edition edition.

4.7 out of 5 stars
4.7 out of 5
51 customer ratings
How does Amazon calculate star ratings?
Amazon calculates a product’s star ratings based on a machine learned model instead of a raw data average. The model takes into account factors including the age of a rating, whether the ratings are from verified purchasers, and factors that establish reviewer trustworthiness.
Top Reviews

ealovitt
HALL OF FAMETOP 1000 REVIEWER
4.0 out of 5 stars This book's title is a bit misleading
Reviewed in the United States on June 14, 2016
Verified Purchase
My favorite stories in this collection by Lifetime Grand Master of Fantasy, Andre Norton are those that take place in the dales and sorcerous wastelands of High Hallack. But there are also a smattering of fairy tales, an Arthurian tale of Merlin and Nimue (The Lady of the Lake), a Cold War fantasy, and one of Norton's SF short stories, starring a cat with unusual powers. So this book's title is a bit misleading, but it is still very much worth reading.

Some of this author's most interesting characters must overcome physical handicaps to fulfill their destiny. She wrote novels, e.g. "Night of Masks" (1964) and "Flight in Yiktor" (1986) starring physically disadvantaged heroes, and three of the best stories in this collection are similarly peopled:

"Ully the Piper" - Ully of Coomb Brackett in the Dales was crippled falling out of a tree as a boy. He is asked to pipe for a dance on Midsummer's Eve, but a bully steals his musical instrument and drives him away. Ully is then given the opportunity to offer up his music to another, much stranger group of dancers.

"Dream Smith" - The 'dream smith' of the title was burned so severely by an explosion at his father's forge that he must wear a mask and live away from the other villagers, including his family. The heroine has also been cast off by her family because of physical abnormalities. This story's magic is delicate, almost wistful. The happy ending is a bit contrived, but I wouldn't have had it any other way.

"Earthborn: A Witch World Story" - One of the scholars of Lormt, a mute old woman is forced to confront an ancient evil.

It is easy to get caught up in Norton's fantasies. She conjures her reader right into the midst of the mayhem and magic through the eyes of likable, believable characters. This collection, mixed though it is, will be treasured by her fans.
Read more
15 people found this helpful
Helpful
Comment Report abuse

VJP
5.0 out of 5 stars They were good stories then. They are good stories now!
Reviewed in the United States on November 29, 2014
Verified Purchase
I am old enough to have read stories by Andre Norton many years ago. This compilation of some of them is just as fresh as it was when I was growing up. Though some of the science fiction references are dated, due to the original publishing dates, the stories within are still marvelous. I loved the stories then, and I am glad I purchased this compilation so I can enjoy them again and again and again. I look forward to the next volume.
Read more
7 people found this helpful
Helpful
Comment Report abuse

C. Gunther
4.0 out of 5 stars A blast from the past
Reviewed in the United States on May 2, 2018
Verified Purchase
Andre Norton introduced me to science fiction almost 50 years ago. I owe her memory a lot for that. These short stories take me back to the wonder she introduced me to. Mostly, these are good times from my past. Some I still don't "get". I'm looking forward to the next volume of Tales from High Hallack.
Read more
Helpful
Comment Report abuse

Karen K
5.0 out of 5 stars Magic and Steel
Reviewed in the United States on August 28, 2017
Verified Purchase
Ms. Norton was a grand master of science fiction and fantasy and created worlds filled with wonder, inhabited by well defined characters. The High Halleck series follow a well developed world where magic and steel combine to allow the characters room to grow and surprises to keep drawing you in.
Read more
2 people found this helpful
Helpful
Comment Report abuse

auntdeb930
5.0 out of 5 stars Not all stories are from High Hallack
Reviewed in the United States on September 11, 2018
Verified Purchase
This is a good collection of Ms. Norton's short stories but they are not all set in High Hallack. Some, like the Gifts of Asti or All Cats are Grey, I have read in other collections but many of these were new to me. I enjoyed most of them but I did find the name of the series misleading.
Read more
Helpful
Comment Report abuse

Imasue
5.0 out of 5 stars One of the greatest writer of all times
Reviewed in the United States on August 23, 2017
Verified Purchase
I've loved Andrea Norton since 1957 when I first picked up one of her books at the school library. She was a tremendous write and I have a copy of almost every book she wrote.
Read more
One person found this helpful
Helpful
Comment Report abuse

Oma Pepper
5.0 out of 5 stars Wonderful story teller
Reviewed in the United States on December 11, 2014
Verified Purchase
I started reading Andre Norton when I was 12?13? years old and now my youngest grandson, who is 11, has received his first copy. Wonderful story teller, may she rest in a peaceful world with all the Gentlefems and Gentlesirs, all of the 2 legged and four legged family members to keep her company.
Read more
5 people found this helpful
Helpful
Comment Report abuse

Jayne White
5.0 out of 5 stars High Hallack
Reviewed in the United States on July 3, 2017
Verified Purchase
Wonderful imagery, Norton used words like a fine artist uses pigment.
What a treat to have these quick short stories collected in one place.
For anyone with a few stray minutes and a bit of imagination, this is
a great read
Read more
2 people found this helpful
Helpful
Comment Report abuse
See all reviews from the United States

april
5.0 out of 5 stars recommended!
Reviewed in the United Kingdom on August 10, 2015
Verified Purchase
great, super, fantastic...AN absolutely the best...love it...a great spread of stories, some from the witch world setting, some from more "modern" places, some from the space lanes and cosmic civilizations, and all of them interesting, well written and gripping...many years ago i wrote a fan letter to AN, thanking her for the joy and thoughts she had given me and my family, and wonder of wonders, she wrote back and thanked me for my letter...gracious, polite, sweet...and a great writer, who continues to give joy and food for thought...thanks again...
Read more
Helpful
Sending feedback...
Thank you for your feedback.
Sorry, we failed to record your vote. Please try again
Report abuse

Amazon Customer
4.0 out of 5 stars had these before
Reviewed in Canada on May 25, 2014
Verified Purchase
enjoyed reading these stories, however realised that I had these in other books still sitting on my shelf. I do keep paperbacks for 40-50 years
Read more
Helpful
Sending feedback...
Thank you for your feedback.
Sorry, we failed to record your vote. Please try again
Report abuse