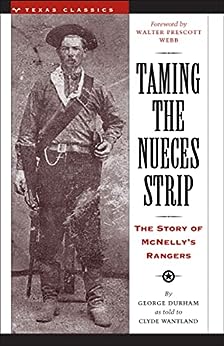 by George Durham (Author), Clyde Wantland (Author, Contributor), Walter Prescott Webb (Foreword) & 0 more Format: Kindle Edition
See all formats and editions
Sorry, there was a problem loading this page. Try again.
“Durham’s account is modest and straightforward . . . has many lessons for anyone interested in the history of the Old West, leadership or law enforcement.” —American West Review

Only an extraordinary Texas Ranger could have cleaned up bandit-plagued Southwest Texas, between the Nueces River and the Rio Grande, in the years following the Civil War. Thousands of raiders on horseback, some of them Anglo-Americans, regularly crossed the river from Mexico to pillage, murder, and rape. Their main objective? To steal cattle, which they herded back across the Rio Grande to sell. Honest citizens found it almost impossible to live in the Nueces Strip.

In desperation, the governor of Texas called on an extraordinary man, Captain Leander M. McNelly, to take command of a Ranger company and stop these border bandits. One of McNelly’s recruits for this task was George Durham, a Georgia farm boy in his teens when he joined the “Little McNellys,” as the Captain’s band called themselves. More than half a century later, it was George Durham, the last surviving “McNelly Ranger,” who recounted the exciting tale of taming the Nueces Strip to San Antonio writer Clyde Wantland.

In Durham’s account, those long-ago days are brought vividly back to life. Once again the daring McNelly leads his courageous band across Southwest Texas to victories against incredible odds. With a boldness that overcame their dismayingly small number, the McNellys succeeded in bringing law and order to the untamed Nueces Strip—succeeded so well that they antagonized certain “upright” citizens who had been pocketing surreptitious dollars from the bandits’ operations.

“The reader seems to smell the acrid gunsmoke and to hear the creak of saddle leather.” —Southwestern Historical Quarterly
Read more
Previous page
Next page

...the reader seems to smell the acrid gunsmoke and to hear the creak of saddle leather. ― Southwestern Historical Quarterly --This text refers to an alternate kindle_edition edition.

Cloie
4.0 out of 5 stars These were tough guys
Reviewed in the United States 🇺🇸 on June 2, 2011
Verified Purchase
I enjoyed reading this book. The account of George Durham is as blunt and straight forward as the men he came to know and ride with. That is, he speaks of a life that was hard and brutal. He speaks to how poor he was prior to becoming a Ranger, and what it was like for a young man to become a part of a group of men who, while they were in the business of upholding the law, they were in fact similar in many ways to the lawbreakers they sought. Durham makes no excuses for the things the Rangers did (for instance, the fact that they took no prisoners). The Rangers acted as judge, jury and executioner, and to some, they were as low as the outlaws and badmen they went after. Durham's recollections of King Fisher, a well known rustler, rancher and later a lawman, was fascinating in describing how Fisher dressed, acted, and most importantly, how he consistently outsmarted those that sought to end his days.

A main character of the book is Ranger Captain Lee McNelly, who is acclaimed here and elsewhere as a brave and able leader. During his rather short life McNelly participated in some wild and woooly events, and it is our good fortune that Durham was along to witness some of it. It is apparent that Durham had a bit of the hero worship for McNelly, but considering Durham's young age when he joined the Rangers, and his lack of experience in the ways of the West, it is not unusual that Durham would be so inclined.

The reason that I didn't rate this book a five star was because of the near total recall by Durham of the conversations and spoken words attributed to others, many years after the actual events. In my own case it is sometimes hard to remember what someone said a mere month ago, so while I attribute a great deal of accuracy to the events described in the book, I have to wonder about the verbatim conversations. However, this does not unduly detract from the overall favorable experience of reading this book.
Read more
3 people found this helpful
Helpful
Report abuse

Campbell
5.0 out of 5 stars What a story - and all true!
Reviewed in the United States 🇺🇸 on October 1, 2020
Verified Purchase
My favorite book. An excellent account (story) that makes you feel as if you are right there. If you are interested in Texas, or western history, law enforcement, firearms and the human story - this little book has it all. I am from the same area of the book's title - "The Nueces Strip". The Nueces Strip is all the land between the Nueces and Rio Grande Rivers. This is a story of a very young Texas Ranger (George Durham), and his experiences riding with 35 year old Ranger Captain Leander McNelly. Both men have interesting stories. Clyde Wantland (passed away in 1963) is the author and used to write for the San Antonio express. He has written several other articles and small books that I haven't been able to get ahold of.
Read more
One person found this helpful
Helpful
Report abuse

GJW
5.0 out of 5 stars Well written and captivating
Reviewed in the United States 🇺🇸 on August 10, 2021
Verified Purchase
Great story and a very interesting historical read, especially for someone who grew up in the Nueces strip. The author captures your attention in a manner that makes it difficult to put the book down!
Read more
Helpful
Report abuse

a Montanan
5.0 out of 5 stars Leadership We Need Today
Reviewed in the United States 🇺🇸 on June 14, 2016
Verified Purchase
There was trouble on the Mexican border. A cartel was pillaging, murdering, and raping. The federal government was hobbled by political correctness and a fear of offending Mexico. The Texans took matters into their own hands and commissioned a frail, but determined war hero to head up his own team. It could be 2016, but this is 1876 and the brave, little leader was the indomitable Captain Leander McNelly, a plain-spoken sufferer of consumption who repeatedly rose from his sick bed to lead his loyal Rangers against well-organized banditos. He once went against direct orders of the Secretary of War and took 49 men on foot across the Rio Grande to assault hundreds of outlaws and return a herd of stolen cattle. When several federal troops assisted in the gunfight and were disciplined later by politicians in Washington, D.C., McNelly took six weeks and traveled at his own expense and the situation was rectified. A very good book with important life lessons. We need a Captain McNelly today.
Read more
10 people found this helpful
Helpful
Report abuse

Robert K.
5.0 out of 5 stars A wonderful read in Texas history!
Reviewed in the United States 🇺🇸 on June 12, 2018
Verified Purchase
I first became aware of Captain McNelly when I visited the King Ranch museum in Kingsville Texas. Then I watched the Hollywood version of this book. I had to know the truth, so I bought the book. Absolutely wonderful!! And absolutely nothing, nothing like that movie. I think only the McNelly name was the same. I recommend this to anyone interested in history or Texas or the Rangers. it reads more like a Louis Lamore novel. All the facts seem to tally and don't read like a school history book. Well worth twice the price
Read more
5 people found this helpful
Helpful
Report abuse

Graham This item was not a problem!!
5.0 out of 5 stars The upright character and willing to help those in need. Good leasson for all of us today!
Reviewed in the United States 🇺🇸 on August 11, 2020
Verified Purchase
For anyone interested in Texas History! King ranch is mentioned plus a role Richard King played in helpIng Texas Ranger Leander McNelly and his company clean up the Nueces Strip. Very compelling detailing the hardships people of that time endured. Good read!
Read more
Helpful
Report abuse

bigfish
5.0 out of 5 stars Fabulous Texas time period history.
Reviewed in the United States 🇺🇸 on March 6, 2021
Verified Purchase
Fabulous time period history about hardship, corruption, and law and order. EVERYONE should know how much suffering was involved with taming The Nueces Strip.
Read more
Helpful
Report abuse

Ace
4.0 out of 5 stars Great book but typo-ridden
Reviewed in the United States 🇺🇸 on April 13, 2012
Verified Purchase
After reading Elmer Kelton's "Captain's Rangers" I picked up Durham's book and find it equally enjoyable, as well as a great lesson in how a fine writer of fiction can create a story based on historical fact and keep it true while weaving other characters into the tale. However, I cannot rate this book five-star because it is incredibly full of typos. I wouldn't have believed UTPress would produce a volume so full of typos. Nine errors in the first 83 pages? Some kind of record. I know the original issue in 1962 was not like this (Note: I worked there 1951-56) for in those days the standards were high! I suspect these reissues are created by OCR and nobody is proofing them. Fie on them! Maybe I should apply for my old job back!
Read more
6 people found this helpful
Helpful
Report abuse
See all reviews

Justin Hazel
5.0 out of 5 stars Very eye opening to what life was like for 19th century rangers in the wild west days.
Reviewed in Canada 🇨🇦 on June 30, 2021
Verified Purchase
I enjoyed the anecdotes and real life experiences written about.
Read more
Report abuse
See all reviews
Report an issue
Does this item contain inappropriate content?
Report
Do you believe that this item violates a copyright?
Report
Does this item contain quality or formatting issues?
Report