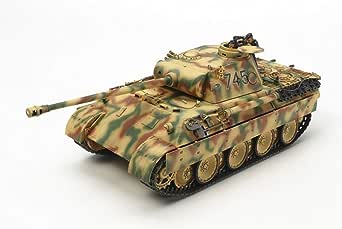 4.6 out of 5 stars
4.6 out of 5
55 global ratings
How are ratings calculated?
To calculate the overall star rating and percentage breakdown by star, we don’t use a simple average. Instead, our system considers things like how recent a review is and if the reviewer bought the item on Amazon. It also analyzes reviews to verify trustworthiness.

Iverson
5.0 out of 5 stars Fun build right out the box!
Reviewed in the United States on July 25, 2018
Verified Purchase
Very nice kit. I just love to build Tamiya armor and this one was a typical fun build. I also purchased that additional tracks and etched engine covers. The only thing I don't understand is their system for making the upper hull removable. It just doesn't sit right. It needs to be glued together because on mind the upper hull didn't sit flush with the lower hull.
I usually paint the road wheels separately, but on this one I just assembled them all as per the instructions. I will paint the lower hull and road wheels and then glue the hull together before painting the rest.
I wish the track idler was more easily adjustable. When using the add-on track links, I had to glue the idler on, fit the tracks to check tension and then rip the idler off to adjust it. The adjuster is keyed, but I would expect Tamiya to offer a solution that was a bit more thought out.
I love the well sculpted figures!
Read more
3 people found this helpful
Helpful
Report abuse

J. C. Bednar
5.0 out of 5 stars Tamiya finally offers the Panther D!!!!!! :)
Reviewed in the United States on May 18, 2017
Verified Purchase
Finally - Tamiya offers the Panther D in 1/35 scale!! Have a few other manufacturers Panther D offerings, but just never built any of them because of the incredible parts count.

Could not wait to get this kit into my grubby hands - was so excited!! This is a great kit, practically builds itself. Instruction sheet was easy to follow and in "booklet form" instead of the traditional "accordion" style. Instructions in multiple languages, as well as, providing suggestions for paint and decal placement and a brief history. Also included is an awesome color paint guide - something that Tamiya has been offering with their kits for a few years now. 2 crew members are provided: 1 half-torso & and full figure. Track shoes are the single piece "rubber band" style with great detail on both sides. Main gun barrel is single piece with 3 pieces making up the muzzle break (capped end).

Tamiya also released a few "detail up" kits specifically for this kit. They consist of: photo-etched engine grills; aluminum gun barrel w/breech; and link-n-length track shoes with greater detail. If you use these items, the instructions will tell you when/where to use them. I used the engine grills and track shoes. Also, this kit is compatible with Tamiya's separate Panther/Tiger engine kit and will also tell you when/where to place that kit as well.

There are some small pieces, but should not cause any problems. Hatches can be posed open/closed Parts fit was just great - had no problems anywhere. Only problem I had was assembling the separate link-n-length track shoes. I just took them for granted; pre-painted them; discovered that they need to be assembled a certain way; did not really pay attention to them; and just basically ruined them. Ended up using the rubber band tracks and they do look just as great. You get periscopes for the driver/bow gunner positions, but I glued the top/bottom hulls together and totally forgot about the periscopes. So....??

Anyway, ordered kit via Amazon and shipped from Japan. Kit box was wrapped in "bubble wrap" and slightly crushed on one end upon arrival - but everything inside was in great shape!! Kit arrived well in advance of the promised arrival date. Remember that this is a plastic model kit, so assembly is required. Paint/glue sold separately.
Read more
7 people found this helpful
Helpful
Report abuse

Russell from Arizona
5.0 out of 5 stars Worth a buy
Reviewed in the United States on October 22, 2019
Verified Purchase
Worth every penny. Delivered with no broken parts. Lots of work ahead of me. You best be an experienced builder for this kit. Get the metal addons for this, worth the cost.
Read more
Helpful
Report abuse

Michael R. Federico
5.0 out of 5 stars Five Stars
Reviewed in the United States on October 11, 2016
Verified Purchase
Love it, everything fit well and was easy to put together,
Read more
2 people found this helpful
Helpful
Report abuse

sergio zayas jr
4.0 out of 5 stars Recieved Product
Reviewed in the United States on January 4, 2020
Verified Purchase
Box was a little wet but the stuff inside was good. Thanks
Read more
Helpful
Report abuse

amacustomer
5.0 out of 5 stars 1/35 Panther D plastic scale model by Tamiya
Reviewed in the United States on July 10, 2018
Verified Purchase
This is the Panther I have wanted for decades. Super nice kit - not overly complex, beautiful moldings, fits like a dream.
Read more
Helpful
Report abuse

Mr GTS
4.0 out of 5 stars I would say the track link set is the best I have ever seen from Tamiya
Reviewed in the United Kingdom on January 1, 2016
Verified Purchase
Usual Tamiya quality - this model almost builds itself. I added the separate track link set to mine and the mesh for the grills, both really should come with the kit, but they don't. I would say the track link set is the best I have ever seen from Tamiya, with hollow guides and no glue required to link each part together.
The metal gun barrel Tamiya offer for this kit really isn't needed, as the side moulded plastic version the kit comes with is very good, but the two part muzzle break is not and if you get the separate metal barrel, you are still stuck with using the kit's two part muzzle break. A bit of clean up work is needed to get rid of the seam line on that, so I got an Aber metal barrel for my kit, that includes a decent metal muzzle break. I think Tamiya need to realise that offering a metal barrel is one thing, but they need to include the muzzle brake in (one piece) metal as well.
I wasn't impressed the skirts, so am leaving them off my model. They are a little better than some of Tamiya's previous efforts, but still can't compete with after market metal offerings or the one's in Dragon's Panther D w/zim kit. I may add some Aber skirts, I am still thinking about that; many of these vehicles can be seen in historical pictures without the skirts anyway. I also added the good old Maybach engine kit from Tamiya and am working on building this all into a diorama for a Panther D being serviced on the Russian front. I'm ignoring the kits recommended brown/green/dunkelgelb paint scheme and going with a faded green on dark yellow camo pattern that I found through research.
All in all, a very good kit if you want an easy build and a good end result, also very good as a base for detailing into something more special if you're a more experienced modeller, such as myself. Highly recommended!
Read more
12 people found this helpful
Report abuse

Stephen H.
5.0 out of 5 stars Tamiya models are still the best old and new
Reviewed in the United Kingdom on June 17, 2020
Verified Purchase
It's a tamiya kit no fit issues it's just a great build it's a tamiya kit
Read more

5.0 out of 5 stars Tamiya models are still the best old and new
Reviewed in the United Kingdom on June 17, 2020
It's a tamiya kit no fit issues it's just a great build it's a tamiya kit
Images in this review

Jimmy Mac
5.0 out of 5 stars Goes together really well.
Reviewed in the United Kingdom on October 5, 2019
Verified Purchase
Great kit builds up to a real replica
Read more

5.0 out of 5 stars Goes together really well.
Reviewed in the United Kingdom on October 5, 2019
Great kit builds up to a real replica
Images in this review

Rainbow Cool Stuff
5.0 out of 5 stars Great quality
Reviewed in the United Kingdom on May 13, 2018
Verified Purchase
Other half loves Tamiya models so I bought this one for him and he loves it
Read more
Report abuse
See all reviews
Pages with related products. See and discover other items: model tanks kits, 35 scale model buildings, n scale buildings assembled, scale model 1:35, tamiya model paints, tamiya models