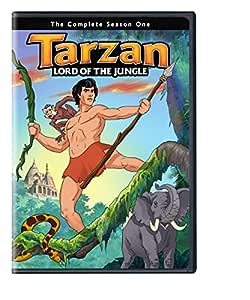 Share
STREAM ANYTIME with Prime Video from $19.99
Have one to sell?
Sell on Amazon

TARZAN LORD OF THE JUNGLE Season 1 swings into your home in this classic collection. Journey deep into the lush, mysterious jungle, filled with wonder, beauty..and peril! When threatened by Vikings, poachers, UFOs and other evil intruders, Tarzan summons his strength and intelligence- and his loyal animal friends- to help him restore harmony to their beloved jungle home. Watch all 16 episodes and let TARZAN LORD OF THE JUNGLE thrill the members of your tribe.

4.7 out of 5 stars
4.7 out of 5
260 global ratings
How are ratings calculated?
To calculate the overall star rating and percentage breakdown by star, we don’t use a simple average. Instead, our system considers things like how recent a review is and if the reviewer bought the item on Amazon. It also analyzes reviews to verify trustworthiness.

Garrett Aja
4.0 out of 5 stars A budget release for a Saturday morning classic
Reviewed in the United States on June 14, 2016
Verified Purchase
Filmation shows have had a very rough time on DVD. Most of their shows and movies have been released time-compressed, occasionally edited ("Diamond Ray of Disappearance" from He-Man and "Busted" from Fat Albert being the two most notorious examples), and with messy noise reduction that turns fast-moving objects into featureless blobs. Warner and Paramount have had better luck, as the Filmation shows they own have, until now, been nicely restored from high quality elements. Now, with Tarzan, Lord of the Jungle's first season, Warner breaks form.

As seen on
Saturday Morning Cartoons: 1970s Vol. 1 , Tarzan looked its age: instead of a fresh transfer, we were presented with a very old video master that, while watchable, was definitely in need of a good restoration. This release is the same: the episodes are watchable, but clearly very old transfers (the Warner Bros. logo tacked on after the end credits look particularly dark and muddied). "Tarzan and the City of Gold" has some rather annoying white lines across the screen for a lot of the episode (which explains why it was taken off that earlier set at the last minute) and the commercial bumpers have been taken out, but if you have that DVD, you know what you're getting here. To further add to the air of "we didn't spend much time on this", the DVD immediately started playing the first episode when I popped it in. No menu, no ads, no FBI warning, nothing.

The show itself is pretty much what you remembered: the most faithful adaptation of the Tarzan books ever put to film. The writing, by Len Janson and Chuck Menville, is strong throughout, and multiple episodes adapt the actual books (or elements of them). The Mangani language is also liberally used, further enhancing the connection to Edgar Rice Burroughs' work. The art, while it of course uses stock footage and other "cheats", looks very good for its time, especially with the rotoscoped elements. The voice cast is excellent: Robert Ridgely soars as Tarzan, and Alan Oppenheimer and Lou Scheimer voice a wide variety of supporting characters with great skill. Guest actors are equally stellar, with Ted Cassidy, Joan Gerber, Barry Gordon, and (in the first of many roles for Filmation) Linda Gary are just as good here as they are elsewhere. And the music by Ray Ellis is some of the best he ever created for the studio: it sounds hot, primal, and suffocating, just like you'd imagine a jungle would feel like.

The bottom line, however, is that a lot of people are going to complain that this release "looks like a VHS tape" or "my old bootlegs look better" because there has been no restoration work AT ALL. Granted, there have been problems in finding suitable masters for many Filmation shows, as Lou Scheimer's personal vault and a recent UK vault find (which is how we got the recent He-Man soundtrack CD) have apparently been of little help with Tarzan, but Warner could have done a lot with these old tapes. Color correction and a simple round of dust-busting would have done wonders, and maybe solved a good deal of the issues with "Tarzan and the City of Gold" (because, as critics of Filmation incessantly point out, the animation is rather limited). Furthermore, there's the issue of the packaging: it's awful. Yes, there are minimal promotional materials in existence (and most include Batman, The Super 7, The Lone Ranger, and/or Zorro), but this series famously modeled its look after Burroughs' favorite artist, Burne Hogarth, and there are a great many artists out there who have been inspired by Hogarth and/or the animators at Filmation (just look at the cover art for all of those other Filmation DVD sets: they are way better than the editing, time-compressing, and poor restoration work would imply). They didn't even use the series' logo, WHICH WAS THE OFFICIAL TARZAN LOGO when the show aired. This whole release seems to be sloppy, and if the show wasn't SO good, I'd have docked well more than one star.
Read more
75 people found this helpful
Helpful
Report abuse

Christopher Mills
3.0 out of 5 stars Great Cartoon, Lousy DVDs from Warners
Reviewed in the United States on June 20, 2016
Verified Purchase
First of all, Filmation Studios' TARZAN, LORD OF THE JUNGLE is one of the best Saturday morning adventure shows of its era (1976-1979). Well-written and extremely respectful to the spirit of Edgar Rice Burroughs' character and stories, this Tarzan adaptation stands among the best to date. Yes, 1970s animation was limited compared to today, and Filmation relied heavily on re-using animation in order to stay within budget and keep the work in the U.S. rather than farming it out to inferior overseas contractors like rival studio Hanna-Barbara. But the show is extremely well-designed, with lush backgrounds, fine character design, and a generous use of rotoscoping, which helps keep our hero's movements realistic and dynamic. Voice actor Robert Ridgley (who also voiced Flash Gordon and Thundarr the Barbarian) is perfectly cast as the Lord of the Jungle. The stories are very much in the mold of Burroughs' later Tarzan novels, with the ape man encountering a plethora of lost cities and civilizations in his remote jungle home.

So why only three stars? Well, because Warner Brothers has completely messed up this blatant cash-grab release. The prints used for this collection of the series first "season" of 16 episodes are in terrible shape, with an almost unrelenting barrage of scratches, specks, dirt and faded colors. No effort whatsoever appears to have been put into this release. There certainly was no restoration work done, and I can't prove it, because I have nothing to compare against, but it appears that these are syndication prints with a few seconds missing, as evidenced by awkward cuts halfway through each episode.

And I don't want to even discuss that horrid, eye-bleedingly amateurish cover art, which is completely off-model and poorly drawn. Heck, even the logo is wrong.

I'm pleased to finally have these great cartoons on DVD, and hope they'll eventually release the remaining episodes. But this two-disc DVD set is just an embarrassment to Warner Brothers and an insult to the creators of the series... and its fans.
Read more
38 people found this helpful
Helpful
Report abuse

Jackson Roykirk
5.0 out of 5 stars Better Than Nothing
Reviewed in the United States on January 22, 2017
Verified Purchase
Yes, video quality is an issue. But for those of us who waited for Saturday mornings just to see this show, and have waited since DVDs first came out to collect these, this set is pure nirvana. Would I want to see these remastered from the original films, of course. But considering how many companies have had their hands on these after Filmation closed up, we should consider ourselves lucky we've gotten this. All Filmation shows that have been released on DVD by various companies look bad. The only exception is Star Trek The Animated Series and that's only because Paramount got their hands on the film right from the start.

This is the best representation of Tarzan, bar none. Whenever I read any of the stories or comics, these are the voices I hear (sometimes with the music too).

Warner Brothers: Don't let the negative reviews, nor the positive reviews that berate the lack of remastering, stop you from completing this project--WE NEED THE REMAINING EPISODES ON A 2ND SET. Please.
Read more
18 people found this helpful
Helpful
Report abuse
See all reviews