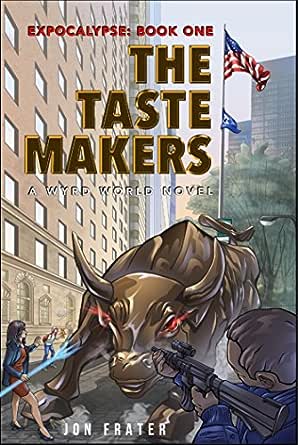 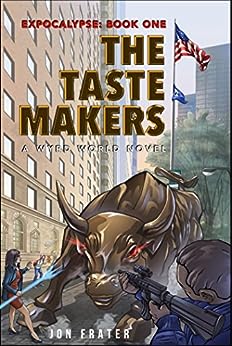 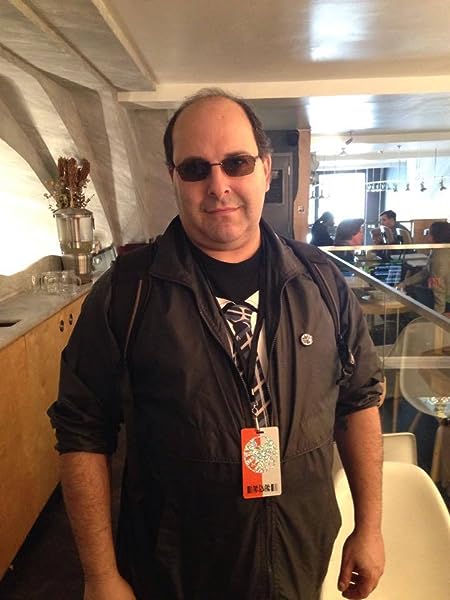 4.9 out of 5 stars
4.9 out of 5
8 global ratings
How are ratings calculated?
To calculate the overall star rating and percentage breakdown by star, we don’t use a simple average. Instead, our system considers things like how recent a review is and if the reviewer bought the item on Amazon. It also analyzes reviews to verify trustworthiness.
Top reviews

Ed Gosney
5.0 out of 5 stars Apocalyptic Fun and Games!
Reviewed in the United States on July 28, 2016
Verified Purchase
Whether you’ve read any of the Apocalypse Weird or Wyrd World novels, it doesn’t really matter, because Jon Frater’s The Taste Makers: A Wyrd World Novel (Expocalypse Book 1) will keep you entertained and on the edge of your seat for the entirety of his book. Yet the experience is so much more if you’ve been keeping up with this apocalyptic madness that began with The Red King by Nick Cole.

The Wyrd World, while not an organized, cohesive bookverse in the same fashion as Apocalypse Weird, is churning out thrillers that you don’t want to miss. And Frater has built a fantastic end-of-the-world scenario and playground, with heroes and villains that readers will be talking about for a long time.
Read more
One person found this helpful
Helpful
Comment Report abuse

J. Alias
5.0 out of 5 stars Praise from the West Coast for an East Coast Apocalypse!
Reviewed in the United States on May 16, 2016
Verified Purchase
Frater, a New York native, wrote a tale of apocalyptic doom in the Big Apple so well and vibrantly that I felt like I was right there. The Taste Makers is fun in its nods to various subcultures in and around the city and moves at a zippy pace that will keep your thumbs busy turning pages to see what happens next. I enjoyed my time reading this book and left with a sense of admiration for the depth of Frater's ability to write convincingly in diverse genres.
Read more
2 people found this helpful
Helpful
Comment Report abuse

Brett Adams
5.0 out of 5 stars Shocking
Reviewed in the United States on May 31, 2016
Verified Purchase
I was a little surprised with the willingness to off many of the The Familiar characters, can't wait for the next installment, and where the story will go
Read more
One person found this helpful
Helpful
Comment Report abuse

Chris Fried @ The Indie Athenaeum
5.0 out of 5 stars As the apocalypse envelops New York City, one woman is destined to fight it in this engaging and gruesome novel!
Reviewed in the United States on January 19, 2017
Julie works at a venture capital firm run by Phil Ponzick, which is currently working on selling state-of-the-art knives created by The Hungry Corporation. They own the hot new Hungry’s restaurant chain that’s doubled its size since it opened in the past year across the country and the world. Currently partnered with CEO Anatole Hungry himself, the firm is collectively working on this endeavor but Julie is having some trouble finding her groove. Maybe it’s because she’s a little distracted by her personal problems like her mother being sick.

After Julie is given a new job within the firm, the apocalypse strikes the world and New York City becomes a battleground. As demonic forces quickly start to consolidate their larger army, Julie becomes an unlikely leader with a destiny she was never aware of, gathering together strange otherworldly allies to create a resistance while the larger apocalypse is brewing.

Joining her on her newfound quest is Michael, a police officer caught up in the bedlam as the city is transformed into apocalypse central, complete with its own minions. While there are skirmishes and clashes between the forces of good and evil, the final showdown, involving a demonically possessed Wall Street charging bull statue (!), is one of the highlights of this exciting and pulse-pounding adventure.

This is a novel that sets the stage and ramps up quickly into the apocalypse, going full-throttle from there onwards. There’s lots of death, blood, and murder in the streets. Citizens of the city are forced to choose sides or die a gruesome death. And these state-of-the-art knives play an unexpected but critical role in how quickly chaos descends onto the city. The horrific nature of what’s going on here is visceral and terrifying, bringing out the dread and increasing the tension as the situation continues to deteriorate.

I really liked the organization and logistics as the evil side recruits its forces and gathers its allies. In lesser hands, this could be boring stuff. But here, it's used thoughtfully and to maximum effect, showing how cunning they are, how they are recruiting large numbers to their side and how this apocalypse has long been in the planning. It's an effective strategy in how they are coordinating and consolidating their forces while also using it for solid storytelling purposes, demonstrating pure unadulterated evil through its processes.

Julie is an interesting and fascinating main character, loaded down with her self-doubt and personal problems like how her mother is slowly dying from cancer-related issues. After numerous battles and a little downtime, she takes some time to remember her and asks herself why she hasn’t done more of that. I wish the author did more with that story thread but I’m guessing there will be more of that when the next book in the series comes out.

Michael seems like an intelligent guy for a police officer up to a certain point in the story but then he makes a couple of dumb decisions with drastic consequences. It’s refreshing that Michael is a police officer and despite his training, freaks out at the apocalypse like the rest of us most likely would. It also breaks the typical stereotype that all police officers are cut from the same cloth in fiction. He made some bad decisions during the blindness but at least he realized it and learned from it as the novel progressed.

Finally, I must give a shout-out to Julie’s allies that she meets up with at the church. Without saying anything else about them, and you will know exactly what I mean when you meet them, I will point out that they are dangerous and deadly while also providing some unusual but welcome comic relief at the same time. It’s a precarious balance between the two but the author pulls it off well amidst the grimness of the novel.

Overall, this is a dark journey of cataclysmic proportions as New York City is transformed from the city that never sleeps to the city that transforms into the center of the apocalypse. It’s got notable characters, a compelling plot and an inventive storyline that engages the reader’s deepest fears and turns them into reality.
Read more
One person found this helpful
Helpful
Comment Report abuse

Daniel Arthur Smith
5.0 out of 5 stars A Surreal Adventure at the Center of the Universe
Reviewed in the United States on May 14, 2016
This amazing thrill ride of a story pulls the New York you know from under your feet. I enjoyed this east coast glimpse into the Wyrd universe. The characters are well developed and the action fast paced and surreal. If you like paranormal apocalypse than this is right up your alley.
Read more
4 people found this helpful
Helpful
Comment Report abuse

Kindle Customer
5.0 out of 5 stars Snakes and killer cutlery, oh my!
Reviewed in the United States on February 7, 2020
I really enjoyed the extremely creative plot. Absolute anarchy in New York involving insane people with knives is pretty darn entertaining. A nice twist on the zombie theme, and the supernatural and evil elements were a nice touch. Really enjoyed the book!
Read more
Helpful
Comment Report abuse

Joe Hudson
4.0 out of 5 stars Creepy, fun, & fantastic!
Reviewed in the United States on October 3, 2016
A hard to put down gory jaunt through an apocalyptic, blood-soaked, satanic version of Occupy Wall Street. The character development was on point. The use of social commentary in the storytelling was superb.

My only gripe would be where the story ends, however I feel that the author knew exactly what they were doing, leaving us wanting more!

A.Meyers
5.0 out of 5 stars Damn
Reviewed in the United States on September 24, 2017
This was my first novel by Jon Frater, but it most definitely will not be my last!

Jon writes a vivid picture of NYC. A strong heroine, and out-of-this-world allies. I look forward to the sequel, to see how the evil is thwarted!

I started reading the Apocalypse Weird novels a couple years ago. That project has broken up, but the stories are still coming.
Read more
Helpful
Comment Report abuse
See all reviews