You've subscribed to In the Line of Duty! We will preorder your items within 24 hours of when they become available. When new books are released, we'll charge your default payment method for the lowest price available during the pre-order period.
Update your device or payment method, cancel individual pre-orders or your subscription at
Your Memberships & Subscriptions
There was an error. We were unable to process your subscription due to an error. Please refresh and try again. 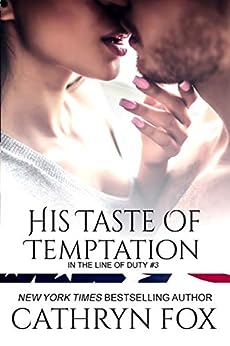 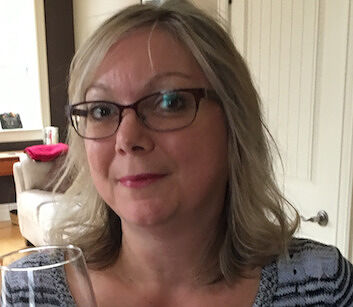 by Cathryn Fox (Author) Format: Kindle Edition
Book 3 of 7: In the Line of Duty
See all formats and editions
Sorry, there was a problem loading this page. Try again.
Read more Read less
Previous page
Next page 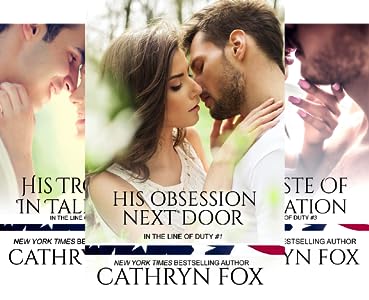 New York Times and USA Today bestselling author Cathryn Fox is a wife, mom, sister, daughter, and friend. She loves dogs, sunny weather, anything chocolate (she never says no to a brownie) pizza and red wine. She has two teenagers who keep her busy with their never ending activities, and a husband who is convinced he can turn her into a mixed martial arts fan. Cathryn can never find balance in her life, is always trying to find time to go to the gym, can never keep up with emails, Facebook or Twitter and tries to write page-turning books that her readers will love.

S. Richards
4.0 out of 5 stars He wants her so bad. "What could one little taste hurt? One tiny f'ing nibble..."
Reviewed in the United States on November 6, 2014
Verified Purchase
I read His Taste of Temptation as a stand-alone and it worked out just fine. I was looking for something light and easy but would, hopefully, still give me some sweetness and sexiness as well. Loved the blurb, I'm a sucker for the hot guy falling for the girl-next-door type, especially when she's been under his nose all along, and I thought the cover hinted at how sweet maybe this couple would be together.

Loved that the heroine is lush and curvy, busty and a bit self-conscious of that. She was teased and called names in school (fatty) because she tried to hide her curves with baggy clothes. She has some body issues going on still. I loved that she wears glasses, loves her sweat pants, and has to sometimes wear a bite guard at night. Too cute. She was so lovable and sweet. Love those curvy, sweet heroines like Madison.

Brad was such a nice guy. And best of all, he liked Madison in sweats and glasses, or dressed up in skirts and heels. He liked her anyway she was because she was hot and sexy to him no matter what. I really enjoyed how he helped her be more comfortable in herself, in showing her curves more, having sex with the light on. Such a sweet hero. Very patient. He was so into her, but was trying to fight it because he thought Madison and his younger brother had something going on. He was so jealous of that. He wanted her for himself!

He does have some jealous moments in the story. It's supposed to be a month-long affair for him and Madison, but he sure didn't like it when one of his friends thought to put a move on her. The romance is sweet and easy, the sex hot and spicy, and all of it just felt really good to read. Hoping the next book is about Brad's brother. Would love to read that, and to see this couple again.
Read more
One person found this helpful
Helpful
Report abuse

Momof2
4.0 out of 5 stars Holy hot!
Reviewed in the United States on May 27, 2017
Verified Purchase
Brad and Madison showed how much they loved one another, even if they didn't recognize the type of love it was, for awhile. Watching them create a 30-day plan after an accidental night together was a perfect situation for them. Watching them maneuver through those weeks and begin to question their own feelings and what they really mean only to have everything come down to the last night was perfection.
Read more
Helpful
Report abuse

JB
5.0 out of 5 stars Great Series
Reviewed in the United States on August 21, 2018
Verified Purchase
This is a really good series & author make greats ties between the books , soldiers & how childhood can impact/ guide us
Read more
Helpful
Report abuse

KBirnley
5.0 out of 5 stars Wonderful read!
Reviewed in the United States on December 21, 2015
Verified Purchase
This was a beautiful, heartwarming story where the girl with the curves gets the hot sexy guy. It's an empowering story about being comfortable with and loving yourself. It's only then that true love will find you.
Read more
Helpful
Report abuse

Gina L. DeWitt
5.0 out of 5 stars Sweet and HOT!
Reviewed in the United States on November 8, 2014
Verified Purchase
Holy Moly these two have some smokin hot sex!! I'd have to say my favorite part is the fact that Madison is curvy and over the 30 days she spends with Brad, she develops the self confidence to know that she is awesome and he learns true trust. This is a fantastic addition to Cathryn's In The Line Of Duty series!
Read more
Helpful
Report abuse

Kindle Customer
5.0 out of 5 stars Each story just gets better and better...
Reviewed in the United States on November 13, 2014
Verified Purchase
So Madison and Brad story has many different history issues, but can they overcome their own pasts and find a future... well let's hope so!!! Hot and steamy don't even begin to describe this love affair! Happy reading : )
Read more
Helpful
Report abuse

Amazon Customer
5.0 out of 5 stars LOVE this book!!
Reviewed in the United States on August 18, 2021
Verified Purchase
Really enjoyed reading this book it was so good!!
Read more
Helpful
Report abuse