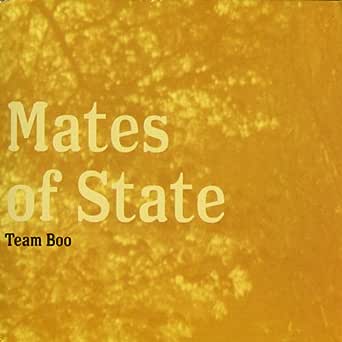 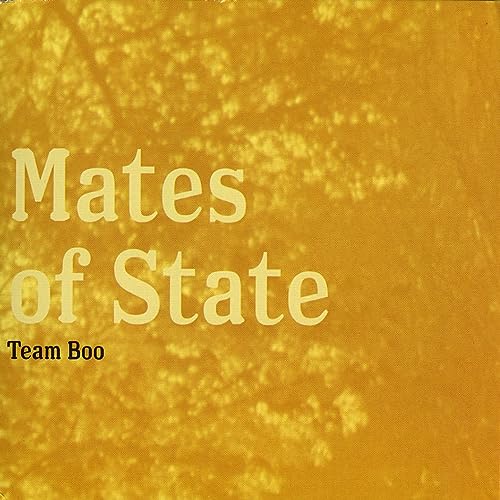 4.1 out of 5 stars
4.1 out of 5
21 customer ratings
How does Amazon calculate star ratings?
Amazon calculates a product’s star ratings based on a machine learned model instead of a raw data average. The model takes into account factors including the age of a rating, whether the ratings are from verified purchasers, and factors that establish reviewer trustworthiness.
Top reviews

Seg Arch
4.0 out of 5 stars Cute, but not horribly cute.
Reviewed in the United States on January 8, 2004
Verified Purchase
I really dug the the first Mates of State CD. My Solo Project had plenty of odd tempo changes, obscure lyrics, and weird beats, accompanied by decisively pop-sounding vocals. To my disappointment, the second cd with the exception of "a duel will settle this" settled into a much more pop consistency of songs, with some of the tracks having choruses sounding like children's rhymes. So how does "Team Boo" measure up? Well, despite the title the third cd tastes much closer to the underground-pop feel of the first. Unfortunately, on occasion Mates spout trite lyrics like "It all begins with a smile" and make various noises usually reserved for mock-pop. Whenever I hear them go "Bom ba bom BA BOm" I have to roll my eyes. I understand Mates of State is not there to appease my personal musical desires, but it aggravates me because they so clearly have the capacity to do so. Anyways, there are enough moments of artistic catchiness that even if it doesn't directly correlate with my tastes I can still enjoy it. And if I have to have one pop CD in my collection I'd rather it be Mates of State than anything else.
Read more
5 people found this helpful
Helpful
Comment Report abuse

armando
5.0 out of 5 stars A solid and incredible album
Reviewed in the United States on March 8, 2006
Verified Purchase
I'm not going to lie to you -- this album made Mates of State my favorite group that's currently performing and recording music.

If you haven't heard Mates of State by this point, this album is a must-hear. Their signature style has only grown stronger from record release to release. They do things as a duo that are simply amazing.

Posting this now, as I'm eagerly awaiting their new album later this month (March 21st, 2006), and regardless of it's unique success, Team Boo remains a solid piece of work that I listen to almost daily.

Droon by the loove
5.0 out of 5 stars Still classic after all these years
Reviewed in the United States on November 23, 2012
Music lovers "of a certain age" probably all have what I have: their private little list of albums that should -- but did not -- make superstars of the artists who recorded them. (Two of mine are the second album by Boston's Human Sexual Response and the debut album by Throwing Muses. I know: Who???) Another one near the top of my list is this radiant gem by the best two-person rock-pop band ever (sorry, White Stripes). If you're one of "us", finding a stranger who feels the way you do about Team Boo is like finding an instant BFF. Okay, so I exaggerate, but not by much. This album combines uniquely inventive counterpoint melodies and lyrics, "I Am the Walrus" type juxtapositions of imagery, intentionally vague lyrics that morph into powerful emotional statements, more musical ideas than most bands manage in ten albums, and the outpouring of sheer creativity that is the common thread among the albums on that list of mine. And it is no doubt that mind-blowing sense that "I have NEVER heard anything like this before" that explains their failure to make it in the heartland, their inability to convert the masses, who -- yes, I'm an elitist, I know it -- want their music, like their movies and their food and so on and so forth to follow a comfortingly familiar formula. Anyway, if you have never heard Team Boo, and if you are one of those people perpetually hungry for something new and fascinating and complex AND accessible (in the best sense of that word), then you, my new best friend, are in for one rare and delectable treat. Enjoy. Again and again and again.
Read more
Helpful
Comment Report abuse

Luke Robinett
5.0 out of 5 stars Sappy Sweet, Shrill, Offensively Catchy
Reviewed in the United States on April 6, 2005
This CD may as well have been titled "guilty pleasure," because for me, that's exactly what it is. Somehow Mates Of State have made one of the most immediately catchy and captivating albums in recent memory while defying every notion I had of what makes a good "rock album." The songs on this disc are blatent and direct, saturated with unapologetic, childish glee.

The Mates Of State aesthetic consists of a male/female (and in fact husband/wife) vocal attack, shrill, giddy organs and keys, and thankfully ballsy, solid drums holding it all together. The sound here is as blissful as it is ridiculous, a sort of fun-house ride through pulsating organs hammering out bold, instantly hummable melody lines, tight (sometimes shouted) vocal harmonies that resemble Rainer Maria's back-and-forth dynamic, and strikingly upbeat lyrics. The duo manage to cover a broad range of sounds with this seemingly limited setup. The organs hum like bass guitars, squeal like Strats, and spit out all kinds of crazy sounds and textures in between, giving the ultra-sweet pop tunes on Team Boo a truly undefinable sound.

At face value, this approach recalls the gimmickery of the White Stripes girl-and-guy minimalism. But where that duo's shortcomings are apparent (Meg's miserable drumming and a self-conscious attempt to be lo-fi) both "Mates" are very adept at their respective instruments, creating a full, energizing, and completely satisfying sound. And it all sounds completely genuine, devoid of the pretense with which other indie acts of the day deliver their music.

Tunes like "Ha-Ha," "Whiner's Bio" and "I Got This Feelin'" bounce around between absurdly catchy hooks, sing-songy choruses and chaotic organ noise, and ultimately leave you totally disoriented, but wholly pleased with the experience. The Mates ground these bursts of nervous teenage energy with a couple of well-placed mid-tempo pieces. The surprisingly melancholy "Parachutes" finds the duo singing about a couple who sky-dive to their deaths and appreciate the ride together, over a lulling piano line that tugs at the heartstrings as Kori sings "twenty-five seconds to live, and I'm falling." "An Experiment" follows, with a moody, haunting organ fade-in punctuated with analog blips and beeps. A slow build during the verse gives way to a shimmering chorus highlighting perhaps the best lyrical moment on the disc, "I wonder if I could tie the ocean to your knees..." - an achingly beautiful sentiment that feels right at home on an album so overflowing with raw emotion. It's just that the vast majority of that emotion is pure unadulturated bliss, the likes of which is rare in these times of self-consciously serious rock bands and cold, detached electronica. Give this album a spin before you leave for work in the morning, and you're sure to feel somehow a little better about your day.
Read more
6 people found this helpful
Helpful
Comment Report abuse
See all reviews from the United States