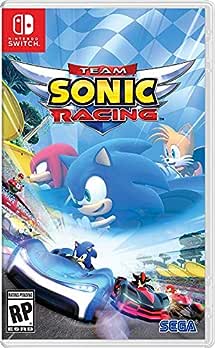 How Fast Can You Go?

Team Sonic Racing combines the best elements of arcade and fast-paced competitive style racing as you face-off with friends in intense multiplayer racing. Race together and work together as a team by sharing power-ups and speed boosts.

Team Sonic Racing combines the best elements of arcade and fast-paced competitive style racing as you face-off with friends in intense multiplayer racing. Race together and work together as a team by sharing power-ups and speed boosts. Take control of your racing style - choose from 3 distinct character types and unlock game changing vehicle customization options to suit your racing style. Speed up. Gear up - team racing at Sonic speed!

4.6 out of 5 stars
4.6 out of 5
929 global ratings
How are ratings calculated?
To calculate the overall star rating and percentage breakdown by star, we don’t use a simple average. Instead, our system considers things like how recent a review is and if the reviewer bought the item on Amazon. It also analyzes reviews to verify trustworthiness.

Tom
4.0 out of 5 stars An Excellent Mario Kart Alternative
Reviewed in the United States on May 21, 2019
Platform: Nintendo SwitchEdition: StandardVerified Purchase
Team Sonic Racing is one of those rare Mario Kart clones that is exiting enough in its own right to be fun, addictive and worth playing. The game consists of 15 racers, 21 tracks, an Adventure Mode and classic modes like Grand Prix, Time Trial and Exhibition. Some levels are returning from previous Sonic racers, but most are new and fresh. The main draw here is with its exclusive 3-person team system, which forces you to work together with AI teammates to share items, gain boosts and bounce off each other to gain the upper hand in a race. By performing enough of these coop moves, your team will eventually earn a significant speed boost, which could drastically change the outcome of a race if used at the right times. The main mode, ‘Adventure’, places you in a bit-sized map with a Mario-style level structure, where each stage represents a new race. Each level gives players the opportunity to earn up to 3 stars (bronze, silver and gold), which should give the game some replay value in the long run. Each track is designed with upmost care, boasting an enormous amount of color and vibrant texture work that gives you that feeling of quality, with tight controls and a good sense of speed. The game isn't without its fair share of problems, though. First of all, many stages are locked behind Adventure mode progress, so don't expect to fire up the game and choose whatever stage and character you want right away, because you can't. The next issue worth mentioning is in regards to the tone of the game. For years, Sonic games have been catering to little kids, and the series never matured enough to remove the utter cringe from its voice acting and soundtrack, and this game is no different. Luckily, most of the music is well orchestrated and catchy, but the voice acting and a couple songs that contain lyrics can be pretty awful, so expect to be tempted to skip the 'cut-scenes' that occur between Adventure levels and plug your ears when necessary. Overall, I would recommend Team Sonic Racing as a worthy Mario Kart alternative. The power-ups aren't too exciting and the voice acting is pretty bad, but the gameplay, level design and fun factor are all high enough quality to warrant a purchase.
Read more
30 people found this helpful
Helpful
Comment Report abuse

Anthony
4.0 out of 5 stars A surprisingly original cart racer
Reviewed in the United States on May 22, 2019
Platform: Nintendo SwitchEdition: StandardVerified Purchase
I originally had little interest in buying this game. Mario Kart Deluxe is my go to cart racing game and I was looking forward to the remake of one of my favorite racing games from my teen years, Crash Team Racing.

I saw Team Sonic Racing was on sale at Amazon before it even came out. I thought that didn’t sound too good for the quality of the game but at the time for a little over $30, I could at least get a few extra tracks to break the boredom of playing The Mario and Crash tracks over and over.

Upon starting the game I was pleasantly surprised about the feel of the Team Sonic game. I was expecting a typical cart racing game like every other cart clone, especially since the defining characteristic of the last game, transforming vehicles and tracks, was gone from this version of the game.

The team mechanic actually alters the way you play the game. Instead of focusing on coming in first, you have to consider what is best for your team throughout the race. You can stay close to your teammates to provide a gold stream behind your cart that causes a burst of speed as they trail behind or you get a boost if your trail behind them. This can also be used to initiate a slingshot maneuver to give you or your partner an added boost. The end of the race isn’t just a typical whoever placed 1st is the winner, the entire team is ranked on their placement. If this doesn’t appeal to you, you do have option to play races without the Team dynamic.

Team Sonic Racing doesn’t reinvent the cart racing genre but it definitely provides a breath of fresh air to it.
The only downside to the game are the characters themselves. If you don’t have a soft spot in your heart for Sonic and his most obscure pals like Big the Cat, you will be sorry to hear that this game ignores the “Sega All Star” aspect of the previous games which included racers and tracks from other Sega franchises. It’s all Sonic all the time. In the heat of a race it doesn’t matter too much but the characters do talk to each other mid race, so having an affinity for them will have some weight towards your enjoyment.

Larry hendrickson jr
4.0 out of 5 stars A good Sonic expereince for a reasonable price?!? Thank you Sega!
Reviewed in the United States on May 23, 2019
Platform: Nintendo SwitchEdition: StandardVerified Purchase
The game controls well, looks good, and gives you enough characters for a solid experience. There is an adventure mode that eases you into the game and offers some challenges (ring collection, badnick destroying, etc.) to diversify the game play. There is a story to it, not much of one, but I appreciate the effort. They bothered to put the characters into some sort of "Racing Type" that gives them abilities that no stat changes can give. Speed types can deflect fire when they boost, Technical characters ignore slowdown from terrain, and Power characters can plow through obstacles without losing speed. Each character has 6 fronts, backs, and tires just for them to alter their stats, giving you about 270 parts to unlock. Plus there's lots of other options to unlock. Stuff seems to be unlocked through RNG, but the tokens needed are pretty easy to get. A single race could get you 2 or 3 items worth of tokens. Racers do need to preform like a team. You can trade items, give each other speeds boosts from sling shots, and more. There are no micro transactions or day one DLC. These features make this game stand out from other racers for a fun experience. Good job Sega!
Read more
12 people found this helpful
Helpful
Comment Report abuse
See all reviews

Frank
3.0 out of 5 stars Meh...
Reviewed in Canada on June 2, 2019
Platform: Nintendo SwitchEdition: StandardVerified Purchase
I REALLY enjoyed sonic all star transformed, it was hardcore gameplay in the sega universe, amazing game! This sequel... man its such a letdown, less characters and a wonky team gameplay gimmick, the races play in teams, you basically have to help your dumb ai teammates to rank high, and i really dont like that, you can finish the race in first place and you will lose because its the team score that matters. So far not impressed....
Read more
Report abuse