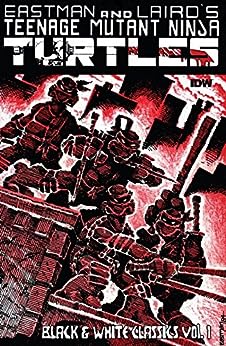 by Kevin B. Eastman (Author, Artist), Peter Laird (Author, Artist) Format: Kindle Edition
Book 1 of 4: Teenage Mutant Ninja Turtles: Black & White Classics
See all formats and editions
Sorry, there was a problem loading this page. Try again.
Master Splinter tells the turtles of his life with Hamato Yoshi, a master of the art of Ninjitsu. He shares the story of his master's murder and asks them to avenge this death and kill the one responsible, the man known as...Shredder!

Limited-Time Offer
Join Audible Premium Plus for 60% off. Get this deal
Next 4 for you in this series See full series
Total Price: $6.96
Books In This Series (4 Books)
Complete Series 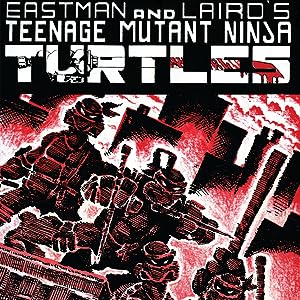 Patrick Payne
4.0 out of 5 stars Great except...
Reviewed in the United States 🇺🇸 on January 29, 2014
Verified Purchase
Ah, this book takes me back to those long-gone middle-school days when I first had the full-color Mirage graphic novel reprints. This is where it all began (even though, in truth, I started as a li'l squirt in '87 with the Murakami-Wolf Saturday Cartoon series), and it really hasn't shown its age. The story is simple -- There are turtles. They are teenage. They are mutants. And, in a twist that should surprise nobody, they are ninja, taught by a mutated rat who was the former pet of a grandmaster ninja. They fight crime, including the villanous Shredder, who in this installment ended up having the same treatment meted out to him as The Joker in the first issue of Batman (in both, they were intended to be a one-shot to be killed at the end. But both became the iconic bad guys of their franchises, and so got miracle resurrections. Just how The Shredder survived being blown up by a Thermite bomb is beyond me but...)

The artwork is just as I remember it, that glorious, rough "indie-comix" style of '83, done as a homage/parody of Frank Miller's signature style. The writing still crackles, and the action is as dynamic as ever. With every page, the sweet smell of nostalgia washed over me. The black-and-white art translated well to the Kindle format (though that glorious first splash page had to be cut in two to accomodate the screen, but it's a small compromise and easily glossed over by all but the most rabid purists who probably moaned about the staple-holes that were there in the original issue), and are as atmospheric as on the printed page.

The one quibble is that while it's *theoretically* and *technically* compatible with the Kindle Paperwhite, in *practice* it falls prey to the same problems that most comic book reprints on my Kindle have shown -- for whatever reason (file size too big? color information somewhere that the processor is straining to read? artwork maxes out the device's memory?) the book crashes my Kindle after I read a few pages -- the device slows down dramatically and finally reboots. And so I had to finally return it for a refund. Sigh. And that's too bad, as this is one of those books I was chomping at the bit to have on the Kindle.
Read more
Helpful
Report abuse

StealthKnow
5.0 out of 5 stars Own it!
Reviewed in the United States 🇺🇸 on April 1, 2015
Verified Purchase
Intellect. Teach for the sake of government.
The children grow and the old get wiser. Autumn harmonies. The tide signals the death, a coda is to make a run through of the skin. Time to make finer noodles!
Read more
Helpful
Report abuse

Taylor Ash
5.0 out of 5 stars you hear it all the time, but if you love tmnt DEFINITELY check out its first run!
Reviewed in the United States 🇺🇸 on August 27, 2022
Finally getting a chance to sit down and read the original version of the turtles. I grew up with all versions of the cartoons, the games, and a few of the toys but haven’t had a chance to read the original Eastman and Laird run. I love this version of the turtles! I was worried it was gonna feel too “Frank Miller-ey” (and frankly… it is) but their personalities still shine through despite all red headbands or black and whit in the case of this book. You hear it all the time but if you are a Turtle-crazed nostalgia child like I am, DEFINITELY give this a read! It’s a good time!

.
.
.
.
I loved seeing where the original Raph meets Casey story came from. I constantly think about that adaptation in 2003 with Raph needing to be stopped before he hurt Mikey and how sorry he was. I really wasn’t expecting that in this art style. It’s a favorite moment of mine and I loved seeing its origins in this book!

Skylar Maloney
1.0 out of 5 stars DONT BUY THIS!
Reviewed in the United States 🇺🇸 on April 3, 2014
Verified Purchase
This isn't a volume of anything. It's just the first issue. Not worth $7.99 at all. Really disappointed that I purchased this. You can get this in color for $1.99 in the kindle store. I don't understand why it is $7.99 for black and white.
Read more
One person found this helpful
Helpful
Report abuse

Joshua Perez
1.0 out of 5 stars Single issues cost $8
Reviewed in the United States 🇺🇸 on February 17, 2014
Verified Purchase
the story is great. classic original TMNT but this is hardly a collection it is literally just the first issue I don't understand why they slapped volume on the tittle.
Read more
2 people found this helpful
Helpful
Report abuse

Christopher
1.0 out of 5 stars Incorrect File
Reviewed in the United States 🇺🇸 on October 26, 2014
Verified Purchase
Other sites list this as the first three issues of the original series. On Amazon this is only the first issue.
Read more
Helpful
Report abuse

Kindle Customer
5.0 out of 5 stars Classic comics at their best
Reviewed in the United States 🇺🇸 on March 20, 2022
Tis series has stood the test of time. It's unique from the art and writing.Any comic fan would enjoy this.
Read more
Helpful
Report abuse

Casey G. Smith
5.0 out of 5 stars Great to see the true origins of TMNT
Reviewed in the United States 🇺🇸 on December 28, 2019
Wow! So may revelations that I won’t spoil, but if you are a TMNT fan (especially from the 80’s cartoon) this is worth checking out.
It’s interesting to see what the original TV show and movie chose to use and to leave out from the comic.
Gritty, engaging and fun!
Read more
Helpful
Report abuse
See all reviews

MR B P VINCE
5.0 out of 5 stars loved it!
Reviewed in the United Kingdom 🇬🇧 on July 10, 2022
Verified Purchase
Classic 80s nostalgia!
Not a bad story either, really hope we get an omnibus soon, or compendium ! 8/10! Great
Read more
Report abuse

Joe B
3.0 out of 5 stars How it all began!
Reviewed in the United Kingdom 🇬🇧 on December 26, 2014
Verified Purchase
I enjoyed it, keeping in mind that it's the very first version of the TMNT story ever. The characters are barely there at all, and Eastman and Laird got a lot better at creating comics as they went along, but it's still worth reading for the sake of what it is - the start of a pop culture phenomenon.
Read more
Report abuse