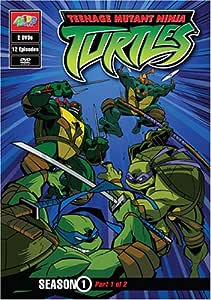 In 2003, 4Kids and Mirage Studios joined forces to bring those heroes on the half-shell back to TV...but this time, they mean business.

Watch as the Turtles evolve from four talented but inexperienced martial arts "brawlers" into a well-honed fighting unit taught by their sensei Master Splinter. Join them as they take on they take on their arch nemesis, the Shredder. Be there as each saga unfolds and our heroes learn that teamwork is one of their most powerful assets.

4.6 out of 5 stars
4.6 out of 5
125 customer ratings
How does Amazon calculate star ratings?
Amazon calculates a product’s star ratings based on a machine learned model instead of a raw data average. The model takes into account factors including the age of a rating, whether the ratings are from verified purchasers, and factors that establish reviewer trustworthiness.

Cable
5.0 out of 5 stars Brilliant series.
Reviewed in the United States on May 24, 2015
Verified Purchase
This series was the logical evolution of the turtles for the 2000’s. It was darker, edgy, funny but with such better storytelling and deeper story lines. It succeeded on every level and in every way. Great animation that didn’t look sloppy after the first season but instead remained strong, clean and sharp and the stories…..they are just so well told and by that I mean that they are engaging and interesting and will, most likely, keep you coming back to see how each story line ends with no cheesey or goofy antics to make one feel silly for watching it through. No batman Donatello or Captain Leonardo kirk here. Great story arcs and good character development all along the way. This is a more grown up version to the 80’s turtles and I have been hoping they would release it for digital purchase and they finally have. This was a series cut short and should have run a few seasons longer imo. Worth a watch if you’re a fan or not.
Read more
7 people found this helpful
Helpful
Comment Report abuse

Brenda Geraci
5.0 out of 5 stars Non-Stop TMNT Action
Reviewed in the United States on March 2, 2018
Verified Purchase
I am a long-time Turtle fan, but as an adult in 2003, I missed out on this version of my favorite green guys. Bought the first season out of curiosity and WOW, am I glad I did. These guys are great! The way the Turtles appear in this version, it is kind of hard to imagine them as "teenagers," but that doesn't take away from their style of adventure. As the other seasons are offered for sale, I will probably wind up buying them all. If you have followed TMNT over the years and in the various incarnations, you will love the 2003 version as well as any others. I recommend them wholeheartedly! .
Read more
2 people found this helpful
Helpful
Comment Report abuse

Haley Nelson
5.0 out of 5 stars So glad I found it!
Reviewed in the United States on January 24, 2020
Verified Purchase
This is a great series. I remember watching it on CW4Kids when I was young. When I was in middle school you could watch the whole series on YouTube as well (which, as I found today, is no longer the case, lol). I honestly don’t mind paying for it now that I can, it’s such a wonderful show with well written stories and great animation. Watching it now as an adult I enjoy it just as much! If you were a fan then or not, this is a great purchase. I hope they have the rest of the series so I can rewatch the whole thing :)
Read more
Helpful
Comment Report abuse

Michele Ivey
5.0 out of 5 stars An Amazing Teenage Mutant Ninja Turtles series!
Reviewed in the United States on January 25, 2020
Verified Purchase
I personally have gone out of the way to own every DVD release of this series that I can get my hands on. It's a great show with a lot of character growth, strong plot, fun comedy and action packed fight scenes. I only wish that they had an entire series box set of the show including Fast Forward and Back to the Sewers.

The DVD set is a great way to be able to share this series with fellow TMNT fans or friends that you want to share the series with. This is the closes we've had to a TV series of the original TMNT comics. Highly recommended.

S. Harris
4.0 out of 5 stars Turtles get a makeover
Reviewed in the United States on July 22, 2010
Verified Purchase
After the first show that made the Ninja Turtles what they are today, they now get a new show of the new century, but this time it's different from that of the old show. This time around the show is more story oriented and the action is probably better than that of the original show that started in the late `80s. While this show borrowed elements of the first movie while at the same time stayed true to the comics, though there's one thing that didn't change and that's the Shredder is still a part of the Turtle universe. While this set only contains like the first half of the first season, but it's better than trying to do what was done with the other show releasing in volumes for the first three seasons then not releasing Season sets. This set helps brings the turtles to how they could've been originally, but at the same time helps brings fans in a younger generation. I give this set a 4 stars out of 5.
Read more
Helpful
Comment Report abuse

Jim Hawkins
4.0 out of 5 stars They finally came to their senses!
Reviewed in the United States on March 24, 2007
Verified Purchase
I saw the original series back in the 80s, and like everyone did back then--loved it. I watched the cartoons regularly, and each movie as it came out. The franchise had a good run, but I didn't expect to see it come back. Much to my surprise, in 2003 a brand new cartoon appeared--and the turtles were more serious, the Shredder was actually intimidating, rather than the bumbling villain from the 80s--it didn't take long before I was sucked in. But the DVD releases were lackluster. When everyone else was releasing season sets for $40-$50, you could only buy TMNT episodes 3 to a disc at $15! So I held off on buying them, hoping the company would come to their senses. And now that I was just getting to the point of thinking I would have to go hunt down all the older 3-episode DVDs, they finally wised up! I feel bad for those who already bought the older DVDs, but I'm very glad they are finally being released in this format. It's better for collectors, and more friendly to those who might not have wanted to pay so much for the single discs (like me).

The 2003 cartoon has had great art/animation, and a more serious, exciting tone that has made it alot of fun to watch. If you were a fan of the old show but have never seen this, give it a try, you won't be disappointed.

Since no one else has posted it, here's a list of the episodes that should be on this disc (from an online episode guide-may vary a little):

1- 7 The Way of Invisibility

Overall this should be a great set of solid episodes. I'm definitely pre-ordering this one.
Read more
50 people found this helpful
Helpful
Comment Report abuse

Amazon Customer
5.0 out of 5 stars Yes this is my favorite TMNT
Reviewed in the United States on August 6, 2018
Verified Purchase
I grew up watching re-runs of the 80 cartoon, and remember them to be corny and a little wakey like most cartoons of time. So when I saw this series come out, with a dark animated style and a longer story arc going between season I was totally sold. I still love this series to this day.
Read more
Helpful
Comment Report abuse

RJW
4.0 out of 5 stars Good show, mediocre video quality
Reviewed in the United States on January 27, 2020
Verified Purchase
The series is great! But the quality of these videos is mediocre. I know it's old, but they look like they were recorded on an old VHS tape. Also, Amazon only has 3 seasons available to buy, but this show ran for 7 seasons. I'm giving it 4 stars because the series' writing was really good.
Read more
Helpful
Comment Report abuse
See all reviews from the United States