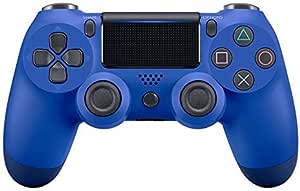 ✅SPECIFICATIONS:⚡
●Enhanced Wide Compatibility Tek Styz™ requires NO need to install any driver, it can be used once connected to your device via Bluetooth.
●For advanced play with Shocks and Speaker, requires a cable connection or PS4/PS4 SLIM/PS4 Pro console
●Built-in 1000mAh polymer lithium battery, it can be continuously used up to 12h after fully charged.
●Heavy Duty, Professional ABS High Temperature grade materials are used ensure a longer lifespan.
●Micro USB – Used for charging and for wired connectivity.
✅ENHANCEMENTS WITH CABLE ONLY:⚡
●Support motion sensing via built-in Gyro and double-shock function via built-in dual motors.
●A built-in Speaker is used primarily to increase player immersion by playing various sounds through the controller speaker.
●3.5mm jack – Used for headphones and headsets.⚡DIRECTIONS:⚡
●Before you can connect your wireless controller via Bluetooth, you will need to activate pairing mode:
●Press and hold the Middle/PS and Share buttons on the wireless controller at the same time.
●The light bar on the back of the wireless controller will start flashing once it's active.
●On your Phone/Device/Mac/PC/Computer/Console, go to Bluetooth settings and turn Bluetooth on.
●Select scan for new devices and then choose [Wireless Controller].
●*Vibration, Rumble, Motors, and Audio port on controller DOES NOT WORK with wireless BlueTooth Connections because these use 3x as much power, data strength, that only a cable can deliver.