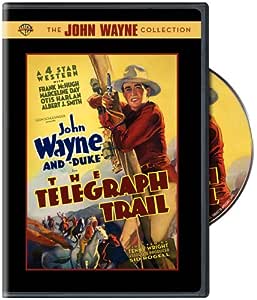 4.3 out of 5 stars
4.3 out of 5
14 customer ratings
How does Amazon calculate star ratings?
Amazon calculates a product’s star ratings based on a machine learned model instead of a raw data average. The model takes into account factors including the age of a rating, whether the ratings are from verified purchasers, and factors that establish reviewer trustworthiness.
Top Reviews

Linda
5.0 out of 5 stars Love John Wayne
Reviewed in the United States on February 8, 2010
Verified Purchase
I have always and will always watch my John Wayne movies on Saturday. I probably have all of his movies and don't care if they are black and white or in color.
Read more
2 people found this helpful
Helpful
Comment Report abuse

Einsatz
TOP 1000 REVIEWER
4.0 out of 5 stars “I always wanted to die with my boots on.”
Reviewed in the United States on April 21, 2017
The story is bare bones, involving the beginning of the telegraph system out west. Not everyone is happy with this new development, cue greedy villain Gus (Albert J. Smith). He riles up the local Native Americans to attack and kill anyone working on the lines. When another group of workers are killed, John Trent (Wayne) and his army sidekick (Frank McHugh as Corporal Tippy) set out to find out why. They immediately incur the wrath of Gus, who has a penchant for tossing knives. In this case Trent tosses them back with equal force. A woman (Marceline Day as Alice) gets between them. At one point they have to circle the wagons. It’s standard fare for westerns of any era.
The horse Duke gets second billing behind Wayne! Wonder what the rest of the cast thought of that.
Duke has the best scene in the movie involving a shadow and a well aimed kick.
A fun but not taxing film. They didn’t waste a lot of time or money on plot or dialog.

Bar 20 Justice
5.0 out of 5 stars JAW-DROPPING CINEMATOGRAPHY AND BLU-RAY QUALITY THANKS TO MINT ORIGINAL PRINTS!
Reviewed in the United States on May 29, 2016
Telegraph Trail is my favorite of John Wayne's Vitagraph (Warner Brothers) westerns. It has a great story, great sets and a stunning female lead. These Vitagraph films are almost as good as the Lone Star westerns John Wayne starred in next. The difference is that the Lone Star DVDs are typically missing scenes, have grainy images or have been doctored with the addition of horrible electric organ soundtracks. By contrast, Warner Brothers released all of these Vitagraph DVDs (including Telegraph Trail) either from mint 35 mm original prints or with some very talented restorers. The Vitagraph DVDs are the cleanest and most fun John Wayne DVDs available; they are almost Blu-ray quality. Note the quality of the streamed version may differ. Start with this film and then try The Big Stampede or Somewhere in Sonora. Don't get hung up on routine bad acting. Good stories and John Wayne make for great fun. The only omission from these Vitagraph films: George "Gabby" Hayes. Let's hope someone (accurately) restores the Lone Star films so we can watch The Duke team up with Gabby again.
Read more
Helpful
Comment Report abuse

B. Garrett
4.0 out of 5 stars An Army scout volunteers to string telegraph wires through Indian territory.
Reviewed in the United States on March 21, 2008
A team of men working on a cross-country telegraph line are attacked by Indians. Just before he is killed, one of the linemen manages to get a message through to the fort, indicating that a white man is behind the attacks. When Zeke Keller and his niece Alice pass the scene of the attack, Alice agrees to deliver a package of letters belonging to one of the dying men. Scout John Trent and Tippy, one of the soldiers, are sent to capture the white leader. Gus Lynch, the man behind the Indian attacks, is determined to maintain his shipping monopoly by preventing the completion of the telegraph. He also tries to force Alice to marry him, but she protests that she is already engaged. To prove it, she pulls out the picture of John that was included in the dead man's packet. Right after she makes that announcement, John and Tippy walk into Zeke's store. John is convinced she is crazy when she throws her arms around his neck. That night, John calls a meeting asking for volunteers to bring supplies to the telegraph workers. Despite Lynch's efforts to dissuade them, the men plan to leave in the morning. Alice overhears Lynch plan an Indian raid and tries to warn John, but remembering their last encounter, he runs in the other direction. Hiding from Lynch, Alice stows away. She pins a note to one of the boxes in the wagon warning of the raid. With this information, John is able to ward off the attack. When Alice is discovered, Tippy thinks she is a spy for Lynch, but John recognizes her handwriting and realizes they owe her some thanks. Lynch convinces a large band of Indians to attack the train, telling them that the telegraph lines will bring soldiers who will kill them. In the midst of the attack, John manages to get a message through to the fort. The Indians are about to claim victory when the soldiers arrive. High Wolf, Lynch's Indian henchman, is wounded. When Lynch refuses to stop and help him, High Wolf kills him. The telegraph line is completed, and John is given an award, but his real reward comes when Alice agrees to become his "commanding officer."
Read more
One person found this helpful
Helpful
Comment Report abuse

Roger Bagula
VINE VOICE
3.0 out of 5 stars not John Wayne's finest hour
Reviewed in the United States on December 6, 2009
Some of the shots in this movie are "reused" footage from other
films ( 1926 Ken Maynard film) and the have him playing harmonica ( like the other
fake singing cowboy movie).
I love John Wayne westerns, but his studio kind of misused him
in several of his early films. Here his side kick Frank McHugh, Yakima Canutt
and the wonder horse Duke get almost as much billing as he does.
I liked the movie which I hadn't seen before
and the history of transcontinental telegraph
is probably important.
Read more
One person found this helpful
Helpful
Comment Report abuse
See all reviews from the United States

BERTOZZI ALBERTO
4.0 out of 5 stars Four Stars
Reviewed in the United Kingdom on November 13, 2015
Verified Purchase
for the wayne's fan
Read more
Helpful
Sending feedback...
Thank you for your feedback.
Sorry, we failed to record your vote. Please try again
Report abuse