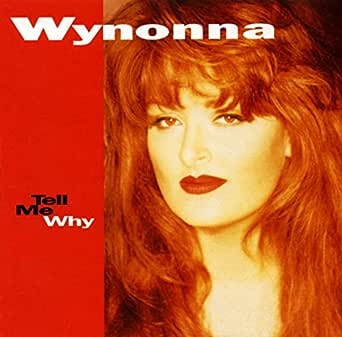 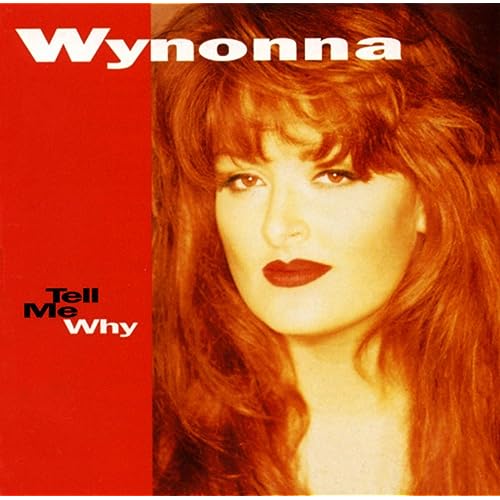 Wynonna
4.5 out of 5 stars 56 ratings
See all 12 formats and editions Hide other formats and editions
Buy the CD album for $12.98 and get the MP3 version for FREE.&nbspCD album ships from and sold by Amazon.com. Terms and Conditions. Does not apply to gift orders. Complete your purchase of the CD album to save the MP3 version to your Music Library.

Michael Butts
HALL OF FAME
4.0 out of 5 stars A LITTLE BIT COUNTRY BUT A WHOLE LOT MORE
Reviewed in the United States on January 27, 2013
Verified Purchase
Although considered a country superstar, Wynonna often ventured into other areas---blues, soul, pop, rock, gospel. Wynonna's unique vocal style allowed her to go beyond pure country and TELL ME WHY is evidence of that fact.
The album yielded five top 10 singles including the passionately delivered IS IT OVER YET. Wynonna is a versatile singer, going from sensitive ballads to spirited rockers.
My favorites: along with IS IT OVER YET, Sheryl Crow's funky FATHER SUN, the folksy I JUST DROVE BY and the infectious title track. The album has two missteps, though: the questionable inclusion of the seasonal LETS MAKE A BABY KING (although it's a good song for a Christmas album) and the trite salute to cars and Elvis in JUST LIKE NEW.
Overall, TELL ME WHY is a good showcase for Ms. Judd's vocal skills.

Elizabeth Hernandez
5.0 out of 5 stars Incredible female country singer 💜
Reviewed in the United States on June 7, 2019
Verified Purchase
I love Wynonna she is my idol! I love everything about this amazing CD. Thanks so much!
Read more
Helpful
Comment Report abuse

Amazon Customer
5.0 out of 5 stars Way to go!
Reviewed in the United States on March 30, 2000
Verified Purchase
I purchased this album in 1993 when it came out. I was familiar with the Judds and loved their music but didn't think to take Wynonna at her own. I then saw a live concert that played on PBS, promoting her Tell Me Why album and let me say, IT ENTERTAINED ME! The next day, I went out and bought the album. It sounded just like the concert. Very well put together! I then worked my way backwards and bought her self titled Wynonna. Ever since, I've been a real BIG fan. Nothing she does disappoints me. That's rare with music artists these days.
Read more
4 people found this helpful
Helpful
Comment Report abuse

Mark L.
5.0 out of 5 stars was looking for a couple songs on the CD
Reviewed in the United States on July 30, 2019
Verified Purchase
loaded easily onto my laptop for use when traveling.
Read more
Helpful
Comment Report abuse

C&A lorey
5.0 out of 5 stars grate music
Reviewed in the United States on March 4, 2016
Verified Purchase
Wynonna is an amazing singer and I love her voice this CD has some grate songs on it like Lets make a baby king, and tell me why. and so much more if you love Wynonna this CD is a must have for any Wynonna collector, Some grate music to enjoy .
Read more
Helpful
Comment Report abuse

Satisfied Customer
5.0 out of 5 stars Great CD
Reviewed in the United States on May 11, 2017
Verified Purchase
I've been a big Judds fan and had to purchase this CD when Wynonna went solo. I had lost it somehow and decided to purchase another one. Love all the songs on it.
Read more
Helpful
Comment Report abuse
See all reviews

R. Wright
5.0 out of 5 stars A completely brilliant CD
Reviewed in the United Kingdom on January 31, 2013
Verified Purchase
This CD by Wynonna Judd (Naomi Judd's daughter) is quite outstanding. There are only ten tracks, but all are good and some are exceptional. Six of them were issued as singles, but, remarkably, in my view the four best ones are the ones that weren't singles. Listen to "Just Like New", "I Just Drove By To See If Things Had Changed", "That Was Yesterday" and "Father Sun" (and the others too).
Read more
One person found this helpful
Report abuse

Mr. Stephen P. Blatch
5.0 out of 5 stars wynona - why not - country sounds excellent
Reviewed in the United Kingdom on November 24, 2015
Verified Purchase
catching up with lost music, essential listening, thanks stephen
Read more
One person found this helpful
Report abuse