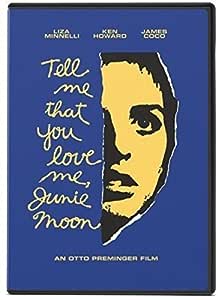 Tell Me That You Love Me, Junie Moon

"Hot off of her Best Actress Oscar nominated performance in The Sterile Cuckoo, Liza Minnelli embodies Junie Moon, the physically and emotionally scarred heroine in director Otto Preminger s (Such Good Friends) Tell Me That You Love Me, Junie Moon. Considered misfits by society, hospital mates Junie Moon (Minnelli, Cabaret), a victim of an acid attack that has scarred her face; Arthur (Ken Howard, Such Good Friends), an epileptic; and Warren (Robert Moore, TV s Diana), a gay paraplegic; set up house together in a rented property owned by the eccentric heiress Miss Gregory (Kay Thompson, Funny Face).

Together the trio will face life s challenges, romantic entanglements and assorted adventures in the film version of the novel by Marjorie Kellogg, who adapted it for the screen. Directed by Otto Preminger, the film co-stars James Coco (Man of La Mancha, Such Good Friends), Fred Williamson (Hammer, Black Caesar) and Leonard Frey (Fiddler on the Roof), and features a score composed by Philip Springer with Pete Seeger performing the opening & closing credits tune Old Devil Time. "

V. Risoli-Black
5.0 out of 5 stars Liza Very Good; Excellent Preminger Film
Reviewed in the United States on September 15, 2016
Verified Purchase
Otto Preminger, the great humanist that he was, had wanted to reach the youth audience again after "Skidoo" with its rather far out screenplay by Doran William Cannon ("Brewster McCloud") decided to make the film version of Marjorie Kellogg's sensitive novel, "Tell Me That You Love Me, Junie Moon." The screenplay by Kellogg was directed by Otto, as with all of his directorial efforts, has a sense of economy (his films were always brought in on time and under budget) and some that are so good, that it seems the novel has been brought to life. This seems to be a successful venture that I can compare only other to Luchino Visconti's film of Camus's "The Stranger" that Camus's estate demanded that it adhere strictly to the way it was written, to Visconti's regret. Liza Minnelli is very effective in a beguiling role of "Junie Moon," disfigured by battery acid. Ken Howard plays an epileptic, and Robert Moore, a homosexual paraplegic. James Coco is also in the cast, as is Fred Williamson in a role that one must appreciate Preminger's daring, and an old Preminger veteran, Anne Revere has a role. The fact that "Warren," the homosexual spends a successful night with a young black woman seems to me to be pushing the limits, but I do not remember how this was handled in Kellogg's book initially. But Otto's handling of "Arthur's" (Ken Howard) delusions and skewered flashbacks to the State facility he was confined in as a youngster are handled brilliantly. Preminger bookends his film with Pete Seeger singing his "Old Devil Time" that is interwoven in the film's soundtrack by Philip Springer, and the song is a perfect blending here. Boris Kaufman did the cinematography. The film is in Technicolor and was originally a Paramount film given a fine Blu-ray and DVD treatment by Olive Films.
Read more
11 people found this helpful
Helpful
Comment Report abuse

Eddie
5.0 out of 5 stars Liza Is Great in This Endearing Quirky Lovable Movie
Reviewed in the United States on September 18, 2016
Verified Purchase
I have been so happy to have found some of Liza's earlier films being released onto DVD format. This one was late in the offering, and I had to purchase this movie before it is not available again. Tell Me That You Love Me, Junie Moon is a wonderfully fast paced movie based on the lives of three "misfits" who find each other and form a lifetime friendship pact together as a way to survive. Each one has their own little history of how they got to be a patient at the hospital that they meet at and form their plans to live together after each is discharged. It is funny, quirky at times though believably so, and tender and endearing. It never lags in action or change of story line from one character to the next. I fell in love with each of the characters and wanted to be a part of their world forever. Liza shows us her acting is superb and fun to watch in this movie. It is a shame, I think, that she starred in and won the Academy Award in "Cabaret" because her reaching stardom status deprived the movie public of what possibilities as an actress, without the singing, she could have shown us in more small budget B movies with other newly up and coming actors such as in this film. I loved this movie. I loved Liza's warmth. I would have loved to have seen her in more vulnerable love stories. She is a star in so many ways. This movie is a classic in my book that I will cherish and view at least once a year as one of my favorites that will be endlessly loved and special to watch. All of the supporting cast gave it a unique quality and ensemble that all came together and to make a movie that is lovable, lovably unique, and fun to watch. It will stay with you for days after the movie ends. I highly recommend buying this movie. Thankfully, we American Liza fans have it on DVD from Amazon.
Read more
7 people found this helpful
Helpful
Comment Report abuse

Clarence W. Potter
5.0 out of 5 stars Fresh Air From The Past
Reviewed in the United States on August 19, 2016
Verified Purchase
Quirky but brilliant film. Liza Minnelli is superb! Great to finally have it on DVD. Hope "Stepping Out" will be on DVD soon.
Read more
10 people found this helpful
Helpful
Comment Report abuse

a movie fan
5.0 out of 5 stars Good-looking film
Reviewed in the United States on October 18, 2016
Verified Purchase
This release has a clear, crisp image with good shadow detail. I mention this because no previous version I have seen has looked this good. Nice to have a decent version.
Read more
6 people found this helpful
Helpful
Comment Report abuse

JAD
2.0 out of 5 stars Off Beat
Reviewed in the United States on December 24, 2019
Verified Purchase
The movie started out interesting but I lost interest soon after. Liza was good, as expected. The ending was awful. Wouldn't recommend.
Read more
Helpful
Comment Report abuse

Fede Diaz
5.0 out of 5 stars LOVE LIZA AND THE MOVIE!
Reviewed in the United States on April 29, 2018
Verified Purchase
love liza, the movie and the bluray edition!
Read more
Helpful
Comment Report abuse