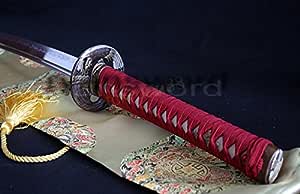 Overall Length: 103 cm / 40.6 inch, Blade Length: 73 cm / 28.7 inch, Handle Length: 27 cm / 10.6 inch, Blade Material: AISI 1095 Carbon Steel+clay tempered, Saya Material: Horn+High quality wood, Handle Material: Genuine ray skin + Hard wood, Weight After Packing: 2.0 kg. This sword is specially made according to ancient Japanese making method. Hand forged, hand abrasive. it was clay-tempered and there is a beautiful hamon on the blade. Over 14 steps abrasive, the blade is very sharp and shiny under the light. It is nice looking and worth to have at this price. It is hard to find a better sword with this price as a gift, collection and for ordinary practice. It is for those who want a high quality sword not only for battle but also for valuable collection.

Eric R. Smith
5.0 out of 5 stars I would highly recommend this to anyone who is interested in buying their first Katana.
Reviewed in the United States on May 23, 2019
Verified Purchase
I would like to first talk about one fact that many people likely see as a downside, this Katana is produced in China. In america Chinese production is often associated with low quality mass production which is just not the case when it comes to this product, and Katana in general. Japan has highly stringent regulations on who can produce Katana, and how many can be produced in one year, so the price of buying a Katana produced in its country of origin is astronomical, and even if you are in Japan all Katana in this price range are imported from china.
In agreement of the other Reviews of this product it is for the most part of extremely high quality. The sword I recived had a brilliant mirror polish, that showed off a beautiful Hamon . 1095 steel is a quality material in this application because of its ability to show a Hamon without the need for chemical enhancement. I have been told that it can be more brittle than lower carbon steels, so is conventionally most suitable for softer targets, but I am not an expert on practical cutting.
so that brings us to the nit picking part of the review, the blade that I recived has a very slight warp, as water quenching tends to do, maybe a 1/8 inch twist along the blade, but the artisan did an exceptional job correcting it in the grind, so the cutting edge is straight. I doubt that this would affect the cut much, and far exceeds my own ability to make a straight cut. beyond that all of the fittings are zinc cast commercially available mass production, as is the saya and brass fittings, but are fit to the blade Incredibly well, I was especially impressed by the fight to the saya, when the blade is fully seated in the saya there is maybe 1/32 of an inch gap between the seppa and the top of the saya, as their should be to accommodate for contraction and expansion due to temperature. The fittings I recived were not quite as nice as the ones in the picture, but I'm not concerned for the price of this piece, and the blade is more than nice enough that if I really wanted I could just replace the fittings.

so in conclusion I highly recommend it I don't think there is any products of appreciably better quality at this price-point. Its a fantastic piece.
Read more
4 people found this helpful
Helpful
Report abuse

Amazon Customer
5.0 out of 5 stars Great quality Katana
Reviewed in the United States on April 17, 2019
Verified Purchase
I am very happy with this Katana. The quality is impressive and it is very sharp. The service that I received from Ryan Swords was excellent. They responded back to an inquiry that I made in regards to safely removing the handle, within one day they sent me a video that helped me remove and properly clean my Katana.
This Katana is well balanced and is very high quality. I will purchase my future swords from Ryan because they provide quality craftsmanship, and high quality materials. Thank you.
Read more
One person found this helpful
Helpful
Report abuse