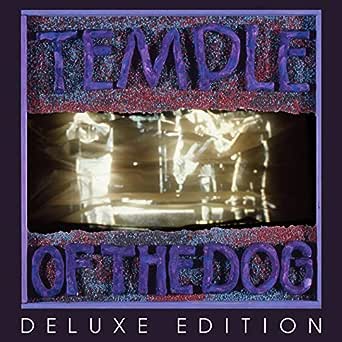 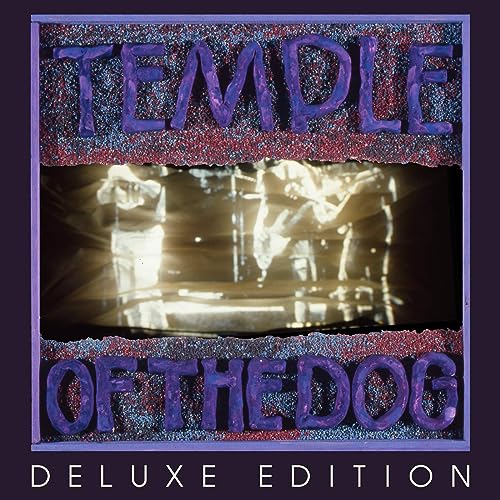 Temple Of The Dog (Deluxe Edition)

Listen Now
Buy MP3 Album $15.49
Your Amazon Music account is currently associated with a different marketplace. To enjoy Prime Music, go to Your Music Library and transfer your account to Amazon.com (US).

4.8 out of 5 stars
4.8 out of 5
1,270 global ratings
How are ratings calculated?
To calculate the overall star rating and percentage breakdown by star, we don’t use a simple average. Instead, our system considers things like how recent a review is and if the reviewer bought the item on Amazon. It also analyzes reviews to verify trustworthiness.

Aaron Wooldridge
1.0 out of 5 stars Terrible vinyl package
Reviewed in the United States on November 10, 2018
Verified Purchase
This review is for the 2018 vinyl pressing. The music is 5 stars, and the sound quality of the record is good. Unfortunately the packaging is a bare-bones ripoff. There is no gatefold and no insert. The inner sleeve is plain white. No credits, lyrics, or photos. The jacket gives no information except song titles and record company info. Band members are not even listed. This is unacceptable for those of us who enjoy buying records because of the packaging. Might as well just buy the CD.
Read more
10 people found this helpful
Helpful
Comment Report abuse

Mick Schnabel
5.0 out of 5 stars A VERY nice sounding press of this classic album
Reviewed in the United States on September 5, 2017
Verified Purchase
It's been a minute since I have left a review for a vinyl record.But I have to say,the sound quality on this is phenomenal! Cornells vocals are brought to the forefront a lot more,without sacrificing any of the other instruments sounds,and everything is very clear and warm sounding,I am very much a fan of this pressing indeed!
Read more
10 people found this helpful
Helpful
Comment Report abuse

The first time I heard Temple Of The Dog on record (having witnessed incendiary live shows long before), I actually wasn't terribly impressed. With each successive listen, tho, it began to grow on me. It's now at the point that it gets four daggers. Next week and several more spins from now, who knows?

What began as an outlet for the pain of a close friend's death (Andrew Wood of Mother Love Bone) comes to you now as a musical offering from a non-band with no touring plans. It's a collaborative effort featuring Matt Cameron and Chris Cornell of Soundgarden, Jeff Ament and Stone Gossard (moving on after Mother Love Bone) with Mike McCready sharing guitar duties both here and in their project Mookie Blaylock.

A while back, when they were considered Seattle's two most charismatic frontmen, Chris Cornell and Andrew Wood were roommates. In the days following Wood's overdose, Cornell put down his observations and feelings in the songs, Say Hello To Heaven and Reach Down. Altho these are the specific tunes written for Andy, references to him and his addiction permeate the record. The guys have a lot on their minds, like prison life (Four Walled World), organized religion (Wooden Jesus) and conspicuous consumption (Hunger Strike).

Side one, with the strongest cut of all (Hunger Strike) following the two songs about Wood, and the records hardest tune (Pushin' Forward Back) following that, is reason enough to own it. Also Cornell's vocals on the piano driven ballad, Call Me A Dog, and the slow groovin' All Night Thing display a style and range much different from those on his Soundgarden efforts.

As you might expect from two thirds of the axemen who cut the mighty Apple, TOTD does have its Bone-esque passages but the record still stands on its' own. Things get a little pretentious at times but, with perhaps a more accessible vibe? than the members' other projects, Temple reveals a side of these musicians you may not hear again for a while.

idvedder
5.0 out of 5 stars Great Album
Reviewed in the United States on February 19, 2016
Verified Purchase
How this isn't a more highly lauded album is beyond me. It touches on friendship, death, aftermath, survival..and manages to do it in the most beautiful, and meaningful of ways. You can feel the emotion, and it resonates with anyone who has lost a loved one. In places it has a loose, awkwardly thrown together feel, but it was recorded in two weeks so you kind of expect it. In a way, I'm thankful for that. This wasn't a project that they made to make money, but a way of honoring their late friend and the somewhat sloppiness of it all reflects how they were feeling at the time. Out of that grief, new friendships were formed with Vedder and McCready, who collaborated on the album. I've worn this album out so many times over the years, and am very happy to now have it on vinyl.
Read more
10 people found this helpful
Helpful
Comment Report abuse

Chris
4.0 out of 5 stars I love amazon. I can find new & used CDs ...
Reviewed in the United States on February 2, 2016
Verified Purchase
As there are fewer physical stores to buy CDs, you can imagine this was tough find. I love amazon. I can find new & used CDs no matter how old they are for a reasonable price. I have always loved the song Hunger Strike but really wasn't sure who produced it? Chris Cornell?...Eddie Vedder? thank god for goggle. I basically bought the CD because I really enjoy the first two tracks, I figure the other tracks might grow on. I like purchasing the physical CD for the tangible object. Please click this review was useful if you agree.
Read more
26 people found this helpful
Helpful
Comment Report abuse

Sara Stallkamp
1.0 out of 5 stars 2 times...i tried
Reviewed in the United States on November 19, 2019
Verified Purchase
This might be from the distribution house, but both ones I received( the original order and the replacement) were creased and damaged the exact same spot. So i feel the whole stack from my local amazon warehouse was a bad bunch. I didn't order another. Try the double LP. Also, this one seemed really thin(cover). I'm not sure what to do...as i don't want the 25th edition
Read more
One person found this helpful
Helpful
Comment Report abuse

The bonus material on the first disc (Say Hello 2 Heaven, Wooden Jesus, All Night Thing) is worth the purchase alone. Simply phenomenal stuff. The second disc of outtakes and demos is pretty much throwaway material or doesn't differ all that much from the released versions.

Still, what a great trip down memory lane. Funny to read that for many Temple was their first introduction to Pearl Jam or Mother Love Bone. For me, it was and still is the revelation of Chris Cornell.
Read more
13 people found this helpful
Helpful
Comment Report abuse

simon
5.0 out of 5 stars Top Shelf!
Reviewed in the United States on June 24, 2017
Verified Purchase
These 2 CD's are some of the best I have heard. Chris Cornell (RIP) is the man. What a songwriter. I am sad there will be no more.
Read more
5 people found this helpful
Helpful
Comment Report abuse
See all reviews

joseph cudworth
5.0 out of 5 stars A Masterpiece Of Song Writing Brilliance
Reviewed in the United Kingdom on September 7, 2019
Verified Purchase
I bought this album when it was first released back in the '90s and loved it, when I heard it had been remastered I had to get it and so should you. All the tracks are brilliant my favourites are Hunger Strike, Pushin' Forward Back, All Night Thing and Say Hello To Heaven. Don't delay BUY TODAY !
Read more
Report abuse

Alexis
5.0 out of 5 stars Fantastic album
Reviewed in the United Kingdom on February 22, 2020
Verified Purchase
Had this on CD at release and have just recently purchased the special edition CD boxset. But at this price i thought i'd add the vinyl to the collection as well because it's such a fantastic album. Shame they've not done a 2 disc 180g version of the vinyl. Yet!
Read more
Report abuse

Mr. Joel S. Greenhalgh
5.0 out of 5 stars Awesome Grunge Album!!
Reviewed in the United Kingdom on March 27, 2013
Verified Purchase
This is is fantastic grunge album, Chris Cornell's voice sounds better than ever, This is early grunge at it's best!!, Highlights include "Reach Down", "Say Hello 2 Heaven" and "Hunger Strike", There are some great guitar solos on their aswell! All in all, an amazing tribute to Andrew Wood of Mother Love Bone!!! For fans of Pearl Jam and Soundgarden, this is gem!!!
Read more
One person found this helpful
Report abuse

Avenger
4.0 out of 5 stars Temple Of The Dog (Deluxe Edition) CD
Reviewed in the United Kingdom on November 20, 2016
Verified Purchase
Remastered and a few new B side tracks, wish it had a live CD or DVD
Read more
One person found this helpful
Report abuse

Mr. D. A. Carp
5.0 out of 5 stars Worship at the temple 25 years on
Reviewed in the United Kingdom on October 10, 2016
Verified Purchase
Great album, the remix is good, outtakes and missing tracks add value, and insight to the process behind the album. I enjoyed it.
Read more
2 people found this helpful
Report abuse
See all reviews