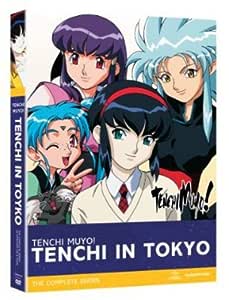 In the beginning, there was Tenchi. Back when the only cure for an anime fix was a trip to the mall to load up on VHS tapes. Back when cable television first introduced this amazing new genre to American fans. The times may have changed since those good old days, but we re thrilled to be bringing Tenchi back! A true classic never goes out of style, and Tenchi is the original anime harem comedy that started it all.

When walking disaster Tenchi sets out for the bright lights of Tokyo, his harem of scandalous space vixens won t take their abandonment lying down! The jilted lovers use an inter-dimensional tunnel to keep tabs on Tenchi and visit him in bed any time they please! The claws come out when the girls find out Tenchi has a super cute new girlfriend and her intentions are anything but honorable! From the creator of El Hazard, it's Tenchi in Tokyo!

4.7 out of 5 stars
4.7 out of 5
84 customer ratings
How does Amazon calculate star ratings?
Amazon calculates a product’s star ratings based on a machine learned model instead of a raw data average. The model takes into account factors including the age of a rating, whether the ratings are from verified purchasers, and factors that establish reviewer trustworthiness.
Top reviews

Jenny Ohnheiser
5.0 out of 5 stars Here they go again
Reviewed in the United States on March 12, 2010
Verified Purchase
If you are a fan of the series I strongly suggest purchasing this well priced product. This Tenchi series explores the gang and their seperation with Tenchi as he goes to Tokyo to train as a priest. This series is one of my favorite not for the animation or hilarity, and the comedy is rather good in this installment, but rather that this series shows Tenchi making a choice with his love life and the ramifications of that choice. This series does come with its problems like low production animation in some episodes and bad translations in some parts if you watch the japanese audio, but this series never stops from being both charming and interesting. The characters are cared for and it shows in this series. The sense of family is this series greatest triumph. So if you are a fan of the series I would strongly suggest this and if you are not, though I still suggest watching it, it would be best to start with the OVA's first to better get a handle on the series and what it's about. It is better to watch the series knowing how hard it is for Tenchi to make a choice with all these women and then to watch him make a choice in this series.
Read more
14 people found this helpful
Helpful
Comment Report abuse

J3F
5.0 out of 5 stars Tokyo
Reviewed in the United States on April 18, 2013
Verified Purchase
Don't really see much of Tokyo and you don't really see Tenchi doing much for the reason being in Tokyo. However, he does surround himself with new people. As his old clique gets drawn away mysteriously. But friendship bonds are stronger than anything. This is a different timeline of Tenchi Universe and Tenchi OVA series. Each one of them just fell into Tenchi all at once versus the original. Also, Rhyo ohki isn't the terror of the skies, but is the pet of Sasami. Sasami plays a bigger role in this version. The original gang is back together though and the history of each is not enlightened throughout the series. It was a pretty devious plot that unfolds and it gets tricky the last 3 episodes to piece everything together. Tenchi is more of a priest in training and discovers he's a planet guardian and battles against a very powerful and scheming foe.

Paul Gossett
4.0 out of 5 stars Glad to Own This
Reviewed in the United States on July 24, 2020
Verified Purchase
I have not watched it yet, but I'm very glad to own this complete series of, Tenchi in Tokyo. Beautifully packaged and delivered, my only issue is the dvd case itself. The case can't hold the last two discs very well and are prone to falling off, the piece in the center that's suppose to hold the disc is faulty. it's mostly the last disc that keeps coming loose. Other than this, everything is in very good condition with no damage to the case or any of the discs.
Read more
Helpful
Comment Report abuse

Scott Sampson
4.0 out of 5 stars Yet another part of the "Tenchiverse"!
Reviewed in the United States on March 9, 2013
Verified Purchase
As an avid fan of everything Tenchi, I had to have it. In the "Tenchiverse" it is "closer in proximity" to the original Tenchi Muyo! OVA series than Tenchi Universe. That said, the gang's all here! Much to Tenchi's dismay of course. As the title says, he is off in Tokyo--and the girls are NOT happy about it. They are especially displeased that he gets a girlfriend! Even though anyone familiar with the misadventures of Tenchi can easily imagine what happens when they find out, I recommend finding out anyway.
Read more
One person found this helpful
Helpful
Comment Report abuse

DEMODR
5.0 out of 5 stars Cute show!
Reviewed in the United States on May 26, 2015
Verified Purchase
Factory sealed as posted. I totally forgot how much I liked this show when it aired on Toonami. If you want a cotton candy kind of dating comedy this one is a really cute story.
Read more
One person found this helpful
Helpful
Comment Report abuse

Jonathan
5.0 out of 5 stars It’s a must for a fan of the series
Reviewed in the United States on January 26, 2019
Verified Purchase
I. Loved it
Read more
Helpful
Comment Report abuse

W. Wooard
4.0 out of 5 stars memories of a forgottent time..
Reviewed in the United States on September 22, 2016
Verified Purchase
no comment
Read more
One person found this helpful
Helpful
Comment Report abuse
See all reviews from the United States

John Beck Holm
5.0 out of 5 stars Finely have the hole seris Yay!!
Reviewed in the United Kingdom on June 10, 2013
Verified Purchase
8 years!! that long it toke to finly have this. The seris is a classic from the golden age of mange
Read more
Helpful
Sending feedback...
Thank you for your feedback.
Sorry, we failed to record your vote. Please try again
Report abuse

Gary Caswell
5.0 out of 5 stars Five Stars
Reviewed in the United Kingdom on March 1, 2015
Verified Purchase
Really pleased with this item.
Read more
Helpful
Sending feedback...
Thank you for your feedback.
Sorry, we failed to record your vote. Please try again
Report abuse